It all seems quite sane at first, zooming away from Paihia wharf in our boat’s launch, sandwiched hip-to-hip with a bunch of shy backpacking strangers. One girl seems oblivious to the world, her eyes penetrating her Fifty Shades of Grey paperback, a guy stabs manically at his iPhone, another clearly the victim of a late night, and doesn’t seem to feel the spray hitting his still-numb face.And then Jonny, our skipper, comes right out with it: “So, who’s up for a weekend of eating raw fish?” The“Yeaahhhhh!” comes from the token tall Swede, the “Coooool!” from the young German lad, and the “You are not serious I hope?” is eloquently delivered by the older British lady, who looks positively terrified. It’s funny, I’ve never referred to myself as an ‘older British lady’ before.

Helplessly gazing at the luxury cruise ship anchored near the rust-coloured vessel we are headed for, I wonder if I might have booked the wrong type of houseboat experience. I contemplate the three-course celebrity chef-inspired banquets that the gleaming white liner will serve up to its freshly showered and mani/pedi-groomed passengers. I then think of Captain Bligh and his loyal crew who were set adrift in the HMS Bounty’s launch by Fletcher Christian in 1789, and wonder if mutiny is still illegal. As we near the wild and wacky YHA-run floating hostel, I focus on the positives: I don’t have a humdinger of a hangover; I left my phone at home; and I’ve got a sexy new novel on my list. Plus, I might just survive the next  22 hours as I climb aboard The Rock. Within minutes, Jonny’s laid-back crew make us feel at home, sipping on beers and mugs of tea as we all exchange names and itineraries. I even get a biscuit! C’mon, who needs celebrity chefs? Food for thought

It’s target practice time, and we’re promised a free beer if we successfully shoot an Australian called Matilda, who is on board with us today. Matilda is the plastic duck that’s now being tied to the boat’s rear. The Europeans take this with a pinch of salt, but the Kiwis take it seriously. They aim with precision, their beers forming an orderly queue. Anchoring in a secluded outer Bay of Islands cove, we throw our lines to catch snapper for dinner. And the hunger is on. Crew member, Nathan, demonstrates how to fillet mullet; bait for our snapper. It’s a bloody mess, filled with flashing memories from high school biology classes. With surgical precision, Nathan then removes the still-living heart from a caught snapper (hunger rapidly fading). It continues to beat on his hand, hopping around like a scene from a cartoon. Only this is real!

“Now this is iron-rich food guys,” he explains with utter seriousness. Captivated carnivores laugh while queasy vegetarians take a seat. “This nutritious dish is treasured by the indigenous people, so look upon it as a superfood.” Nathan then offers it around the group, calling: “Anyone?” But no sooner than I let out a Hyacinth Bucket-like nervous shriek, a teenager steps forward with an outstretched hand. In it went. But it wasn’t like the dreaded challenges in those reality TV shows, where it goes down almost without touching the sides. No, this kid munched, savouring every last capillary, like rolling a fine red wine around the tongue. In (stunned) support, we clapped and cheered. Our slowly resuscitating olfactory systems tell us that the Scotch steaks and beef sausages have hit the barbeque.

At dinner, only one catch-of-the-day is shared between us (very small and large fish are returned to the water for conservation). But there is plenty for all as we feast on our meats with kumara (the local sweet potato favoured by the Maoris), fresh breads, pasta, rice and beetroot salad around the long table, in the kitchen-cum-diner-cum lounge-cum-bar-cum-pool room. As night blankets our twinkling boat, satiated stomachs prop against the bar. Others brush round the pool table, as jokes fly between opponents. “You’re shooting with two left feet man!” and “Your balls are zig zagging mate!” and “It’s the boat swaying!” seem to be on constant replay.The laughter increases and nothing matters. The music is playing, accents are singing, and the drinks are flowing. But refreshingly, nobody is drunk. Through the exchanges of foreign words and chinking glasses, we all share the common language of escapism. 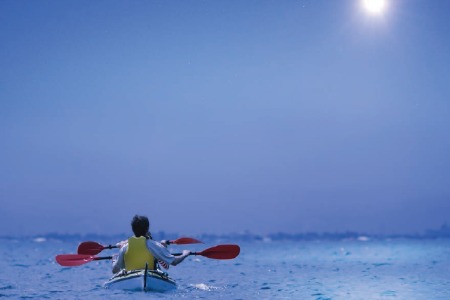 With the sun now in a deep sleep, the crew prepare passengers for night-kayaking. “You are in for a real surprise guys!” promises Nathan. So against human nature, we see saw into our kayaks, torch-less, and paddle into the depths of blackness. That’s until our eyes adjust.

Lying back, the stars hang from the sky as if on stalks. “Look down!” someone shouts. Staring into the water, an iridescent blue glitters vividly. This phenomenon erupts into an underwater firework show as our paddles splash the surface. The luminescence of this marine plankton, belonging to the dinoflagellate family, is known as phosphorescence. To night-kayak, using this spectacular plankton as navigational tools, is absolutely magical.

Back on board, Ben, another warm crew member,summons us to the flickering log fire. We all huddle under itchy blankets, at the end of the candle-lit galley bar. Outcomes the guitar, and as Hans from Norway mobilises the piano keys, Ben sings for us, taking on any Beatles or Coldplay requested. It is however unanimously agreed that Britney Spears’ Baby one more time, just doesn’t sit well! As the firelight fades, we head up to our cosy cabins.They’re basic, but appropriately decked out in maritime timber, all with water views. Jonny and his wife Sarah have been running this unique institution for the past five years. Their environmentally friendly, converted vehicle ferry sleeps up to 36 spirited passengers. The guest book and photo albums reveal that it has heard the snores of backpackers, families with kids and grey nomads. And I too love it here, as I paint my toenails using the moonlight to line up the brush strokes. Splashes from belly-flopping British awake me long before the breakfast bell. With the sun still dozing, I slide open my door and place my newly-decorated toes on to the damp balcony that’s coated in a sparkly veil of salt encrusted dew.“How’s the water?” I shout to a breathless swimmer. Puffing like last night’s dying snapper, he blabbers, “It…would…cut…the…balls off you!” So that answered my question then.

I don’t have the balls (both metaphorically and anatomically) to join him, so instead, do yoga on the sundeck. An American couple join me. Life’s perfect. We may be in the winterless north of New Zealand, but the chilly morning wind soon ushers us towards a Kiwi breakfast of porridge, fruit and shiver-curing coffee. 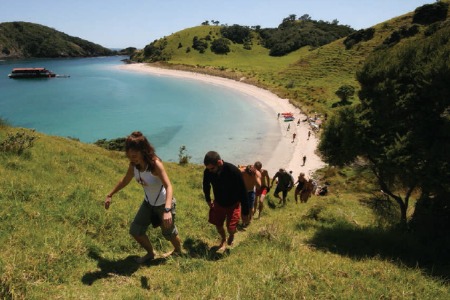 After sunrise, we cruise the pristine Bay of Islands. Blue penguins wade by as flocks of storm petrels shadow them.“Stingrays in the coves attract hammerheads and orca whales!” says Jonny. They remain elusive, but the Soren Larsen tall ship doesn’t. All arms frantically wave as we cross, quite literally, like passing ships. Arriving at Waewaetorea Island, we kayak into Stingray Cove and step onto its toe-warming sand. Some don snorkelling gear, and Ben leads the rest of us on a human ant-trail up to an ancient Maori Pa (fortified settlement).

Conquering the grassy summit, a cathartic canvas unpeels on one side, the sheltered honey-hued beach; on the other, the churning Pacific.“Okay guys,” begins Ben, “We’re on the furthest island from the mainland, and just opposite,” he points, “is Motukiekie, a private island.” But the 144 islands in the bay have not always been as peaceful as today. “Back in 1841, on nearby Motuarohia Island (where Captain Cook dropped anchor in 1769), a scandalous event happened. The 17 year-old son of a Maori chief murdered the family he was working for, and burned their house down. He was the first to be hanged in New Zealand.” Looping back down to the beach, some play rugby,while others splay like lizards absorbing the mid-day warmth. The snorkellers return, looking pretty hyped up about seeing an octopus in the kelp fields. An ominous-looking kina, in all its sea-urchin weaponry, sits in the hand of a stupefied snorkeller. “Our lunch!” he offers.

Back on The Rock, Nathan invites us to sample the Kina’s raw blubbery gizzards. “Drop the grimaces guys,”he says, highly amused. “Kina are endemic to New Zealand and are traditional Maori food. You’d pay a fortune to find this delicacy on a menu.” Cutting the Kina open, he points to its intestines, sex glands and mouth, and then extracts a razor-sharp tooth from it. Then he picks up a spoon! You guessed it. Just like the snapper’s heart, a brave volunteer scoops out the eggs, encased in brown slipperiness, hanging like bird excrement. The group stare, starkly silent. After he performs several involuntary shoulder spasms, not dissimilar to Peter Garrett’s classic dance moves, I dare to ask: “So what’s it like?” No response yet. “Slimy? Salty?Sour?” to which he finally replies with a gurgled: “YES!” The group catapults into laughter.

Sports fever! Three of the best Olympic-themed treats in London