A Skier’s Journey returns for a final season

A Skier’s Journey, the globally-acclaimed short film series is returning for its fourth and final season this fall. Directed by the celebrated Canadian filmmaker and photographer Jordan Manley, the final three episodes represent Jordan’s artistic effort to follow Chad Sayers and Forrest Coots to Iran and China, and culminates with a significant return home to British Columbia. Launched in 2010, the final three episodes compliment three previous seasons that have followed the team from Kashmir, to Dubai, to Argentina and Iceland – focusing not on the glamour of big-mountain skiing, but on the human experience and culture of each special location. 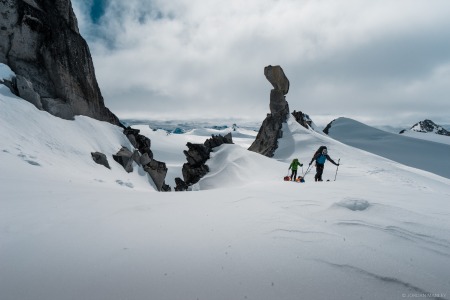 The final series is especially poignant for director Jordan Manley. In 2014, before embarking on a final season of A Skier’s Journey, Jordan crashed while mountain biking. Nothing spectacular, but with a concussion serious enough to put the season on hold. Ten months later, his recovery well underway, Jordan was trying on ski boots. He stood up, knocked his head on a shelf and –the setback was worse than the original injury. By far. Twenty-nine years old, at the peak of his efforts to date and the most he was able to manage was a slow, brief, daily walk. A Skier’s Journey was indefinitely on hold.

This year marks Jordan’s full return from his long and deliberate rehabilitation. Much has been written and documented about how he recovered. It was his process of learning to really look at things close by. Nothing imaginary, cerebral, or huge. Almost like seeing the largeness in everything small, a process that lead to his re-examination of home, literally and metaphorically.

Picking up where he left off with A Skier’s Journey project, Manley set out to film the final three episodes: Iran, China and British Columbia’s Coast Mountains. Was he up for it? “Don’t get me wrong, I love being out in the mountains, but my relationship to risk is very different.” In terms of fitness, not surprising. But the skiing, the joy of being on skis? A simple fall could jeopardize everything.

“It was important for Chad, Forrest and I to finish the series properly. Before we set out, I wasn’t sure how my body and brain would react to the demands of travelling and filming and being in the mountains for extended periods, especially being so far from home in Iran and China,” says Jordan, “This season, there was an extra dialogue running in my head, concerned about my own capabilities physically, on top of day-to-day concerns of gathering film. For the final episode where we walked, skied, and paddled our way across the spine of BC’s Coast Mountains – it was emotional to look back and acknowledge the long (bumpy) road of recovery from post-concussion syndrome, and that we’d made it.”

The final line-up includes Iran, China and Crossing Home (the Coast Mountains, BC). From a very unlikely location to the one right underfoot for Manley. The season is a study in contrasts, probing the margins of skiing, which is what A Skier’s Journey has always embodied. The series continues to portray skiing as the pursuit of a sensation, which includes a community of like-minded individuals and explorations of landscape. No ski porn, no acts of outrageous courage or luck. The characters are not defined as athletes, they are humans on a quest, curious about the world and seeking the simplicity of being borne by snow.

This homegrown project, small in undertaking, ambitious in its desire to find meaning, reveals what we can learn from taking a step back and trying on a new perspective. Discovering what unites us, without words, without rhetoric. After circling the globe, directed by longing, chance encounters and unpredictable sequences of events, Jordan, Chad and Forrest have come full circle. They are home in British Columbia.

Partnering with Arc’teryx, the GORE-TEX® brand and Destination British Columbia, A Skier’s Journey will be released on www.askiersjourney.com

News of the World did not delete Milly Dowler voicemail