A taste of adrenaline in South Tyrol

Flying over the pine-filled valley, alongside sheer rock faces, I’m enjoying the cool air on my face, when Roberto, who I’m tandem paragliding with, makes a sudden, worrying remark. “That beeping of the device tells us about thermals; there are not enough”. Unsure what he expects me to do about it, I ask if he has a solution. “It’s lucky you’re light, as with someone heavy we wouldn’t stay up long,” he responds, as we begin swooping down towards the tree line. I snatch what seems like a vague compliment, but still don’t feel particularly reassured.

We’re paragliding in Alta Badia, the higher part of a picturesque valley in South Tyrol, hidden amidst the Dolomites of northern Italy and surrounded by a UNESCO world heritage site. From the moment we arrived in Alta Badia, I felt a sense of remoteness, which may have had something to do with the three-hour drive from Venice airport – travelling along winding roads to reach an altitude of 1,426 metres. Even after a painfully early flight, the sight of mountains piercing through blankets of cloud, thick pine forests and a scattering of snug timber homes kept me very excited about the trip ahead.

Now, strapped into a nylon wing, with the views below my feet, the sense of freedom and adventure of this place is intense. As the ground gets closer, Roberto informs me that we will regrettably need to land sooner than planned. In just moments, we’re about 20 metres from the ground, and what was a peaceful gliding experience has turned into a thrill ride. We’re speeding towards a field below, with Roberto frantically shouting, “run, run, run!!” Luckily I had been listening during the pre-flight instruction, and realise this is because I should start running even before we hit the ground. I say “hit”, because at this point I really think a crash landing is the only option! We’re moving far faster than my legs will carry me; yet, I have no time to split hairs on what the most feasible landing technique is. We approach the ground, and I spin my legs as fast as I can. Low and behold, despite scuffing our feet a bit, Roberto and I each make it in one piece. I enquire about our quite “sudden” landing, and Roberto admits that with the strong wind behind us, we had landed a lot faster than is usual. I look forward to a soft landing next time – as there will certainly be a next! 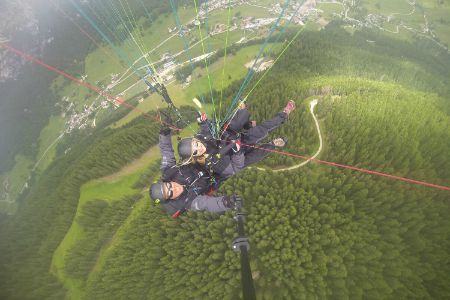 When selecting activities for my trip to Alta Badia, it was a tough choice, as there are so many on offer. These include trekking, climbing, via ferrata, base jumping, biking, geocaching, and nature gyms, among others. If you don’t have experience in these sports, then a new “Explore Your Way” programme offers tailored activity holidays that help you to make the most of the natural environment (more info on activities can be found at www.altabadia.org). Climbing is my passion, and the region offers sport routes graded between 4 and 8a, in addition to plenty of multi-pitch trad climbing opportunities. But I felt like trying some of the other activities on offer, and was intrigued by what exactly geocaching is.

The next day, starting at the Moviment nature gym at Piz La Ila  – 2000-metres above sea level, and surrounded by mountains that tower even higher – my friends and I set off on our geocaching quest. I already know the place, as this is where I took off for my paraglide. It’s easy to get to by cable car from La Villa, which is where we are staying, or alternatively you can go from Corvara or San Cassiano, also among Alta Badia’s six villages. Our “treasure hunt for kids and adults alike” is a great laugh and a fantastic way to enjoy the rolling hills on this plateau. It involves puzzle solving and using GPS coordinates to find boxes that are well hidden in grass, atop of obstacles, and in the woods, with the trophy at the end being a pint, or whatever drink you please. By the end of it we’re famished, and ready for a Michelin-inspired meal at the mountain hut. It’s all haute cuisine in these mountains! “Alta Badia is one of the most foodie valleys in Italy and other ski resorts are trying to copy it,” says Nicole, who lives in the valley. She then speaks the local Ladin language with other South Tyroleans on the table beside ours and I can’t help but admire its beauty. Often, I could pick out words that are similar in French, Spanish or Italian. 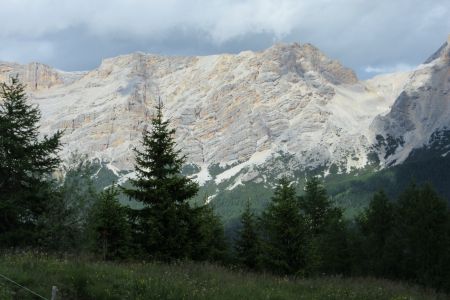 After a satisfying lunch, we take the cable car down and head back to our hotel to meet a local guide, Andreas, who’s keen to show us a picturesque running trail that passes by lakes hidden in the woods. As we enter the forest, Andreas mentions that just a few days earlier, a runner in Trentino was killed by a bear. This seems to stick in the minds of some of the group. In fact, Donna – who comes from LA – becomes quite convinced that when she was separated from the group she had heard a bear in the not so far distance. Wanting to believe there’s a majestic beast in our midst, we ask what it sounded like. Then we feel slightly let down. The sound she makes is far more like a duck than a bear. Actually, if you head to Alta Badia, there’s no need to brush up on your bear sounds, as there are only five bears in the region, Andreas explains. He then goes on to tell me more about the population, explaining that there are just 5,000 locals in Alta Badia, but there are 15,000 rooms for visitors. The valley has been popular with skiers in winter and is rising in popularity in summer too, but it’s still less frequented than a lot of resorts due to its remoteness. In fact, it’s this remoteness that adds to Alta Badia’s appeal.

This week, however, the area has attracted plenty of visitors from all over Italy and Europe, as we’ve arrived in time for Sella Ronda Bike Day, which happens in June each year. Our hotel is buzzing with people who have just taken part in the non-competitive event which attracted more than 19,000 participants. The Dolomite passes were closed to traffic exclusively for the event, which exhausted seasoned cyclists and novices alike. I decide that taking part in the bike tour is the perfect excuse to bring me back to this perfect destination next year! 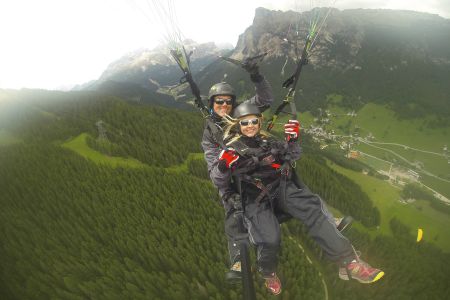 WHERE TO STAY
La Majun is a family run hotel with traditional South Tyrolean décor which is both cosy and elegant. It’s ideally located to provide glistening mountain views in almost all directions, including from the immaculate bedrooms and the stylish dining rooms. The hotel has passed through generations, which may be why it has such a unique, relaxed quality to it. When we arrived back from our daily trips, freshly baked cake was available in the hotel’s reception area, for free. What could beat that?! There’s also a spacious spa area, which has everything you could need to wind down after a day in the mountains. Prices start from £62 per person per night for a standard room on a half-board basis.

Naturhotel Miraval, located on Sasso Santa Croce Mountain, is a new family-run hotel which offers an equipped spa and has a KilimaHotel certification for its low environmental impact. www.naturhotelmiraval.com

WHERE TO EAT
Alta Badia offers a unique gastronomic experience, which any food lover would totally adore. For the adventurous, Michelin starred chefs have designed some inventive dishes, inspired by the region of Italy they’re from, which are served at five of the cable car lodges. GourMete is the culinary feature for summer, where you can walk, run or cycle along fascinating paths in the Dolomites, tasting food and wine offered by the participating mountain refuges along the way. The potato gnocchi on Graukäse fondue, and the puccia and trout salad with horseradish, created by Italy’s youngest Michelin-starred chef, Matteo Metullio, will both fill you up and satisfy your taste buds. You can find these dishes at Piz Arlara mountain hut. In the winter, you can link these lodges by taking part in the Gourmet Ski Safari or even the Wine Ski Safari.

In addition, there are numerous great restaurants in Alta Badia, including two Michelin starred restaurants. Everywhere even caters well to coeliacs as well as people with food allergies. For an upmarket meal in a traditional South Tyrolian setting, head to Hotel Gran Ander’s gourmet restaurant Stüa dla Lâ. It’s deemed soon to receive a Michelin star, and it’s obvious why after trying the goats cheese with clear tomato jelly, and the braised lamb which just melts in your my mouth.

Of course, we’re in Italy, so you can’t start dinner without first enjoying an aperativo. A local waitress introduced us to the Hugo – a refreshing summer cocktail made from elderflower syrup, prosecco and mint, which originates from South Tyrol. It is now officially my second favourite cocktail ever (the first being Espresso Martini).

GETTING THERE AND AROUND
Monarch offers return flights to Venice from London Gatwick, Birmingham and Manchester airports with fares, including taxes, starting from £67.98. From Gatwick, there are various departures per day in the summer months, flying any day of the week except for Monday and Wednesday. Alternatively, you could fly with Monarch to Verona. For more information or to book, visit: www.monarch.co.uk. Most hotels in Alta Badia will organise for a shuttle minibus to pick you up from the airport.

If you want to avoid travelling to the airport in the early hours of the morning, then staying at the Hilton Hotel at Gatwick Airport is a great option, enabling you to roll out of bed just a couple of hours before your flight. To book, visit www.aph.com or call 01342 859442.

Chilling outside the Sagrada Familia