Played in the round, it combines three main interwoven strands, partially linked by the academic progress of star pupil Alia, a refugee from Pakistan who is applying to university.  We see the Welsh English teacher (Rob Brydon) who inspired her tackling a class of uncooperative pupils with the patience borne of long experience, and listen in on the discussions of a pair of Oxford dons as they argue the merits of giving a place to Nikki Patel’s bright, questioning Alia instead of to a more privileged applicant. 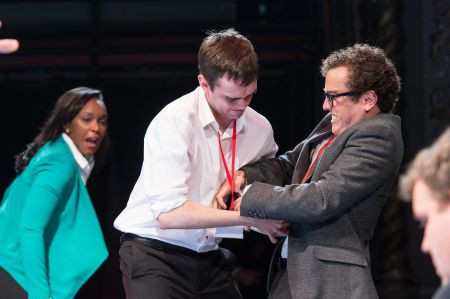 Then there are the fractious and increasing unruly meetings of an education and equality commission where Old Etonian Oliver (Josh Maguire) goes head to head with angry, working class Bill (Brian Vernel) and flapjacks go flying. Most telling of all are the scenes between a group of variously motivated mothers whose tenuous, cross-class friendships, formed at the primary school gates, flounder when it comes to their kids’ education. From faking an address to simulating a marriage breakdown, all the rules are broken in the fight for a place at a good school. 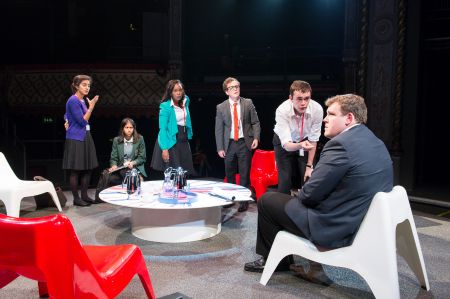 Her characters sometimes veer into stereotype, but having been through the procedure with her own children, Oglesby knows only too well just how unfair – and desperate – the whole selection process can be. Fast, funny, informative – and slickly directed by Warchus himself- this well- researched production augurs well for the new regime.

Chatroom: Neighbours star Dr Karl Kennedy, aka Alan Fletcher, chats about his band The Waiting Room and his brief affair with garden gnomes

Class of the week: Aerial silks at Flying Fantastic in London