A Vespa trip in Spain’s heartland

Riding a Vespa is one of the best ways you’ll ever get to see the real Spain. TNT‘s Janine Kelso jumped on a bike to ride across Spain’s hearland. Here’s what happened.

“How does it feel to have so much power between your britches?” asks my mate Emma, after I’d shot off down the tranquil country road on my shiny red Vespa.

We’re having a lesson on how to ride our flashy two wheelers with Javier, founder of tour operator Away from the Crowds. I do some shaky figure of eights around the narrow streets, drawing bemused glances from locals and narrowly avoid a lorry topped with steaming manure.

Although I was a Vespa-virgin just five minutes ago, riding the beast is easy-peasy, as long as you don’t make any jerky movements. It’s really not much more difficult than riding a bicycle.

Once Javier is happy, we’re handed a map of the circular route we are to take over the next four days, exploring the Spanish heartland, just north of Madrid, a little-known corner of the country.  Javier also hands us a booklet, chock-full of recommendations of towns to stop off in, restaurants that serve up good tapas and most importantly, where to get a petrol top-up.

“You’re on your own now,” Javier says with a smile.

With an exciting adventure ahead of us, we feel wild and liberated, like Thelma and Louise on scooters (but without the guns or the suicide bit). 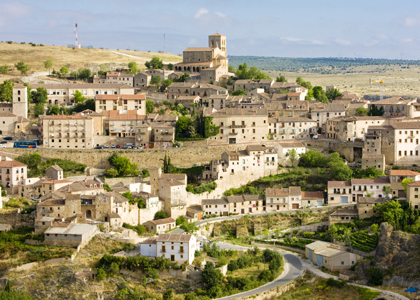 We pass rolling fields peppered with wild red poppies and zip past cows with bells around their necks, before reaching the beautifully preserved medieval town of Pedraza, which we enter under an ancient archway. After parking, we enjoy an ice-cold beer in the laid-back 16th century tavern, Taberna de Mariana, in the main square, marked simply by the word “Vinos” (wines) over the entrance.

Pedraza is a snap-happy tourist’s paradise, with ancient fountains, cobbled streets, storks’ nests in bell towers and a majestic castle.

Once back in sleepy Navafria, where we are to spend the night, we sunbathe beside the village’s deserted natural swimming pool and take an icy paddle, while crickets provide a soothing soundtrack.

As night falls, we visit a few bars, as restaurants don’t begin serving up dinner until after 10pm. For every small beer we buy for one euro, we receive a complimentary plate of pork scratchings and some tasty Spanish omelette, which keep us going until dinner.

Back on the bikes the following morning, we begin to climb a 1760m high mountain pass, meandering through winding roads, flanked by dense pine forests as butterflies flit around us. Stopping for a drink in the pretty town of Lozoya, we spy a woman walking a tiny black piglet on a lead. We race over to take photos and she tells us that the pet is called Petra and is six months old.

The leg of a black pig is a delicious delicacy in this region. Known as ‘pata negra’, the cured ham is dried for two years and then sold for more than €100, but I get the impression that this beloved pet is not for eating. 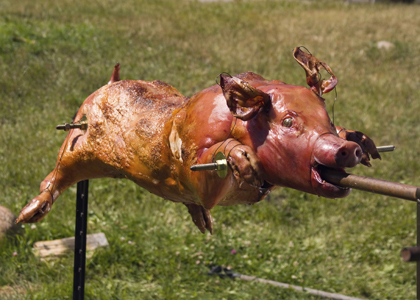 With few petrol stations on our route, we top up with gas in Lozoya and are staggered by how cheap it is: €5 for a full tank.

Our journey is broken up by a gargantuan feast of a lunch in the small central square of atmospheric walled city Buitrago, followed by another chilly paddle in a stream under a bridge.

Riding through Guadalajara province, the untamed roads are used so rarely that grass grows on them.

Engrossed in the striking mountainous scenery, I don’t see a huge pile of steaming cowpat. My front wheel skids, hurling me off the bike. Fortunately, I have a soft landing – on the squishy turd – and I escape with a bruised knee and a battered ego.

A car pulls up immediately to ask if I’m ok. I nod that I am and I’m touched by how friendly the local people are.

We start to tackle an epic stretch of road flanked by turrets of stone, nicknamed the ‘Great Wall of China’ by locals. Zig-zagging steeply down to a river, the surface varies between slate and concrete, making fora bumpy ride. I half-expect Jeremy Clarkson to burst out of the wilderness as this is prime Top Gear territory.

Soon, we notice that the stone has become dark and slate-like, reflected in the architecture of the region, known as “architectura negra”.

Our hotel for the night is La Era de la Tia, a friendly, family-run hotel in a titchy village called Campillo de Ranas (which translates as ‘field of frogs’), which is so isolated that it has no bars or restaurants.

We gorge on a gourmet three-course dinner at the hotel for a mere €15 (including wine and beer), before sitting outside with a bottle of red. Gazing at the star-studded sky, we discover how the village got its name as we listen to the sounds of the croaking frogs and toads (and almost step on one). 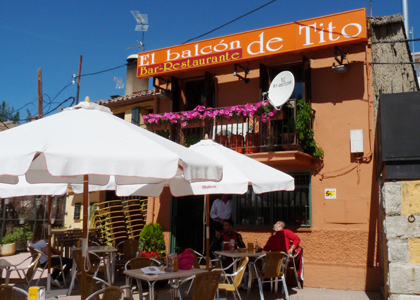 The next day has us climbing another mountain pass, studded with craggy, other-worldly rocks. Breathing in the scent of wild lavender, I feel like we’re zipping through an impressionist painting.

“Goats ahead!” shouts Emma, and the herd scatters off the road as we honk our horns. We’ve not seen a car in hours, but cows, goats and even lizards regularly cross our path. We pass by the Red Village of Villacorta, where the architecture reflects the rust-coloured earth of the sandstone-rich area, and Riaza, built around a bullring, before arriving at the 3000-year-old hilltop town of Sepulveda, where we get lost in the steep cobbled streets.

Eventually, we find our hotel, Posada de San Millan, which dates back to the 16th century and has an arcaded courtyard and gardens with gorgeous views of the town.

After a tapas lunch, we head for the rugged meandering Duraton Canyon, where we hike for a few hours as vultures glide above and the cotton-wool-like seeds from poplar trees dance in the wind. Soaking up this magical scene, I feel fortunate to have discovered the real Spain on our epic safari. 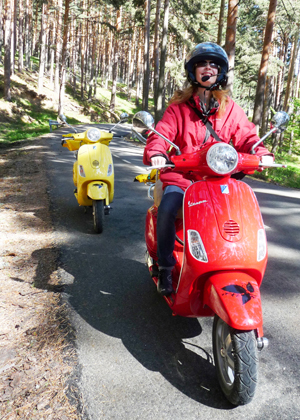 Away From The Crowd’s Javier Bartolome shares this advice:

The end of August and
beginning of September is a good time to see the local fiestas and
experience a slice of the real Spain. There are fiestas in Sepulveda on
August 28-29 and in Pedraza on September 7-11.

Segovia
is famous for its roasted piglet and its roast lamb, which is cooked in
clay ovens. Both the piglet and lamb can be heavy on the stomach so I’d
recommend sharing a quarter between two people. Being vegetarian is not
a concept easily understood here, so if you have dietary requirements
come armed with a good phrasebook.

Although
the weather is warm and dry in spring, summer and autumn, the high
altitude (between 900m and 1100m above sea level) means that evenings
and early mornings are cool. In July and August, temperatures can rise
up to 40 degrees, so avoid the midday sun.

WHEN TO GO: June to September is the warmest and driest time to visit.
GETTING THERE: Ryanair (ryanair.com) and EasyJet (easyjet.com) both fly to Madrid from London.
GETTING AROUND: By Vespa, of course!
VISAS: South Africans need a Schengen visa to visit Spain.
CURRENCY: Euro. 1 GBP = 1.19 EUR.
LANGUAGE: Spanish. Few people speak English in this region so it’s worth taking a phrasebook.
GOING OUT: A small beer is ¤1, normally served up with a slice of Spanish omelette.
ACCOMMODATION: Included in the cost of the Vespa Expedition is Posada Mingaseda, in Navafria; La Era de la Donata, in Campillo de Ranas; and Posada de San Millan, in Sepulveda.
GET MORE INFO AT: awayfromthecrowds.com

» Janine Kelso travelled with Away from the Crowds (awayfromthecrowds.com; +34 6 1821 9449)  who offer the Segovia Vespa Expedition tour for €467 per person, including three nights’  B&B accommodation and Vespa hire for three days. Away From the Crowds also offers Vespa tours in Almería, on Spain’s Andalucía coast.

Early morning run with the dogs at Karioitahi Beach