A weekend in Ljubljana, Slovenia

9:00  Slovenia’s bijou, beautiful and cheap capital is a joy to explore on foot. Start your walking tour in Presernov trg, the city’s main square, dominated by the striking, photogenic dark-pink Franciscan church. This area is the commercial and administrative heart of the city, as well as where all the main museums are. The National Gallery of Slovenia (ng-slo.si) is worth a visit. Cross the Ljubljanica river by the eccentric Triple Bridge, one of the city’s landmarks, designed by one of Ljubljanica’s most famous residents, the architect Joze Plecnik. In front of you is the grey and white façade of the Town Hall. Check out its beautiful Baroque inner courtyard.

10:30  Slovenia’s charming Old Town is arranged along the three interlinked, cobbled squares of Mestni trg, Stari trg, and Gornji trg. Turn right at the Town Hall and wander along the former two, flanked by boutiques and restaurants, before returning to the river bank, which brims with trendy riverside al fresco cafes, bars and restaurants. Have a bite here on the green banks.

13:00  Cross the Ljubljanica by the Cobblers’ Bridge, where 17th-century shoemakers traded free of tax. Just beyond Novi trg is the striking National Library, another creation from Plecnik. You’ll have to venture inside to experience the intended change from darkness to light, which was the architect’s metaphor for acquiring knowledge. 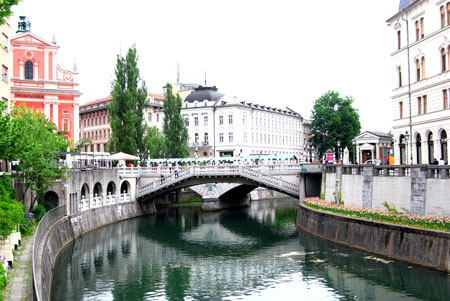 14:00  Turn right along Gosposka ulica, passing on your left the Baroque Kongresni trg. Explore the Knafljev prehod, an oasis of bars and restaurants beside a little park.

19:00  Hungry? Ljubljana has a seemingly endless supply of pizza joints, and their quality can satisfy the tastes of even the most demanding connoisseurs. Line your stomach with the best in town at Pizzerija Trta (Grudnovo nabrežje 21).

21:30  Ljubljana owes its youthful character to having Slovenia’s largest student population, which also fuels an eclectic and buzzing nightlife scene. Most revellers start their night at Cafe Macek (sobe-macek.si), probably the most famous of the city’s riverside haunts. Kick start the night with a couple of Laskos (local beer). Your options for nightlife from hereon in are almost endless.

02:00  Slovenia’s capital is well-endowed when it comes to cheap street food, and the classic snack, the burek, is filo pastry, stuffed with cheese, meat or apple. It’s the kebab of the Balkans. Nobel Burek (Miklosiceva 30) is the pick of the lot, providing a fine, non-greasy, piping-hot version for pocket change. It’s open 24 hours to accommodate hungry people of all levels of sobriety. Tuck in here before bed. 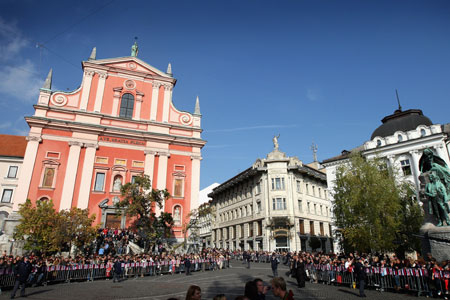 11:00  Enjoy your free breakfast … and then it’s time to go to church. The Catholic 18th-century Cathedral of St Nicholas (1 Dolnicarjeva ulica) has an imposing green dome and twin bell towers. You’ll be awed by the dazzling, vivid ceiling frescos by Giulo Quaglio, and the beautiful bronze doors, added in 1996 to commemorate the visit of Pope John Paul II.

12:30  From here, trudge up the shady path from St Florian’s Church (Gornji trg) towards the heavily fortified walls of the Ljubljana castle on Castle Hill that dominates the city. Or, the funicular railway from Krekov trg will get you there quicker. Admission to the castle is free but you pay £3 to climb the 100 steps of the watchtower, from where you get a panorama, taking in Mount Triglav, Slovenia’s highest mountain.

14:00  Have lunch in a cafe in the leafy Trg Francoske (‘French Revolution Square’).

16:00  Stroll off the food at Tivoli Park, Ljubljana’s largest green space, which has a mix of formal gardens, woods and chestnut-shaded avenues. Access to the park is via a pedestrian subway at the end of Cankarjeva cesta.

17:30  Enjoy a different perspective of the city with a boat tour. Early in the evening the sun throws its light over the beautiful Old Town. Tours leave from Ribji trg pier, and cost £8.35. Keep an eye out for the dragon on Dragon Bridge, which allegedly wags its tail when a virgin crosses.

Fly direct from Stansted airport to Ljubljana’s Joze Plecnik airport, 27km north west of the capital, with easyjet for about £100.  easyjet.co.uk

A light in the dark