Big trip to Namibia: Hiding from leopards and visiting tribal villages are all part of the adventure

Looking out across the endless sandscape, its vivid palette and unearthly emptiness make me feel like I’m on another planet altogether.

It’d be almost serene if I hadn’t chosen to explore what are among the world’s tallest dunes in the fastest, most exhilarating and loudest manner possible – on a quad bike.

After what amounts to a perfunctory briefing and token explanation of how to operate my manual six-geared beast, I speed off into this sandy playground, throwing myself into the belly of dunes, before hurling my machine up their sides and riding the ridges.

This is no gentle trundle around the park – the sea of dunes that make up the Namib Desert can reach heights of around 325m. That’s why the most popular sport in these parts is sandboarding – daredevils often hit speeds of 80kmph as they slide down.

However, having never been much cop on a board, I’ve plumped for some motorised action instead. 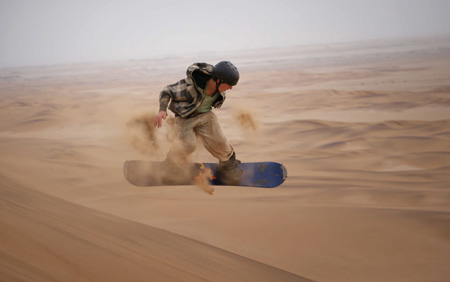 Hemmed by the blustery Atlantic and the ‘Skeleton Coast’ (so-named for the whale and seal bones that covered the shore when the whaling industry was active), this area is usually accessed from the seaboard town of Swakopmund, which has a reputation as Southern Africa’s ‘adventure centre’ to uphold. And it does not disappoint.

Aside from getting sandy, there’s a raft of other adrenaline-inducing opportunities, from sky diving to shark fishing.

But, ultimately, it is the dunes that people come here for, and after my day of hurtling up and down them, I can absolutely appreciate why.

As the sun starts to sink, long shadows accentuate the summits, and I soak up expansive views deep into the desert and far across the ocean. It is a truly special, one-of-a-kind experience.

Namibia is relatively new to this world, in that it only gained independence from South Africa in 1990.

It has gone from being oppressed under SA’s apartheid rule to introducing a parliamentary democracy as Namibia and, in an even more progressive move, is one of the few countries in the world to have conservation and protection of natural resources in its constitution. 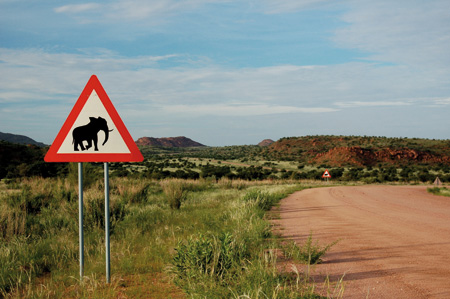 This fascinating blend of preserving tradition and moving forwards with the modern world is perhaps encompassed most surreally in my next adventure. Scoring an invite into the homes of the Himba people is often a highlight for travellers to Namibia.

This ethnic group of cattle herders has pointedly welcomed tourism in recent years and, unlike many ‘cultural villages’ on the tourist trail, where tribespeople are bussed in for a day of trite ceremonial dancing to amuse visitors, the Himba welcome backpack-saddled wanderers into their real homes.

However, my experience with the Himba proves to be even more illuminating.

The story of this thirty-something, openly gay farmer is pure Hollywood. As a child, Burger struck up friendships with Himba workers on his father’s farm, and later in life was ‘adopted’ into the tribe by a chief. 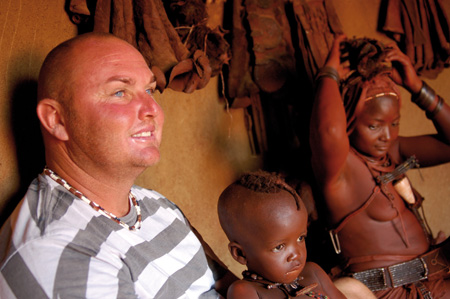 It was this chief who gave Burger his first wife, seeing no issue with the fact that Burger was also in a relationship with a male farm worker.

The wife was barren – making her a bad match in Himba society – and Burger had no interest in heterosexual sex. It was the perfect solution.

Today, Burger is the master of a farm, four villages, three wives, 30 adopted children and an Austrian boyfriend. Upon arriving at his homestead, I join him on the dried cowpat floor of a mud hut, along with wife number one, Makaja.

As a gaggle of naked grandchildren are bounced on various knees, he explains the history, rites and rituals of the proud Himba people, while pointing out the silver and leather adornments that cover their deep-red skin.

Himba women are known for the practice of coating themselves in a blend of butter fat and ochre, which lends their skin this red tinge. 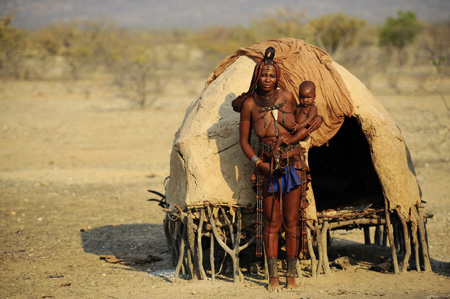 The power of our unique encounter is not lost on Burger. “People travel across the world to spend a day or two here, as it is one of the last places that this experience exists,”he explains. “So I urge the Himba to carry on and try not to assimilate.”

Indeed, the Himba probably have a vested interest in showing their simple way of life to tourists – the tribe was almost extinguished in the Eighties, when a severe drought killed 90 per cent of their cattle. Now that they are so visible, being one of Namibia’s premier tourist attractions, this small ethnic group has found a clever way of preserving its culture.

But fascinating as the Himba are by themselves, I find them even more so with Burger in the frame.

He’s a Namibian who encompasses many aspects of this country’s disparate culture – one that I’m finding surprises and astounds at every turn.

The next day, behind the wheel of a 4×4 I rented back in the Namibian capital of Windhoek, I begin the spine-juddering journey towards Spitzkoppe, which is German for ‘pointed dome’ (Namibia was a German colony until it was handed over to South Africa in 1920).

The prehistoric peak is believed to be 750 million years old and is a violent anomaly in the arid wilderness of the surrounding, pancake-flat plains. 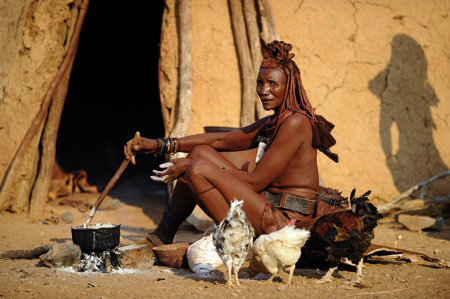 Encouraged by the torrential showers that break up the fiery afternoons of the rainy season, the gravel road slips beneath my ageing vehicle as I battle with the conditions.

The enforced slow driving, however, is nothing like the hell of Monday morning rush hour on London’s North Circular. Here, it is a pleasure.

The silhouettes of warning road signs change from warthog to elephant. Shredded tyres lie discarded on the roadside, testament to the sharp stones awaiting my rubber.

Closer to Spitzkoppe, I’m forced to trace a hairy route. The rain makes parched riverbeds turn to raging torrents in minutes, causing hours of “should I, shouldn’t I?”

procrastination over whether to ford them. Recklessness inevitably wins and, although I don’t yet realise it, my alternator starts to slowly drown. 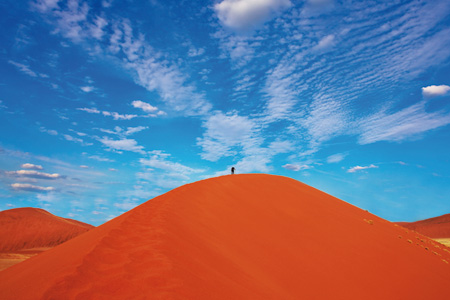 When I finally reach Spitzkoppe, I’m overwhelmed by the sight of this brown granite sword pushed through the earth’s crust, standing at 1000 metres tall. Isolated and impressive, it is a prehistoric playground in which days can be spent exploring its nooks and crannies.

James, a local guide employed by Spitzkoppe’s municipally run campsite, jumps into my car and directs me through
a maze of sandy tracks to the monolith’s base.

Hopping up  the coarse rock, James explains its geology and leads me to Bushman’s Paradise, an overhang dotted with faded ancient etchings of the indigenous hunter-gatherer San people. They are between 2000 and 4000 years old.

Keen to set up camp before dusk, I ask James which one of the 12 sites, sporadically placed throughout the conservation area, he would recommend.

“It is hard to choose among them,” he muses. “They are all good for different reasons … some for sunset, others for sunrise, but number 10 is my favourite as sometimes you can see the leopard who lives in a cave above it.”

Decision made. I cautiously set up at camp 10, peering up into the folds and crevasses searching for a glimpse of the elusive predator. 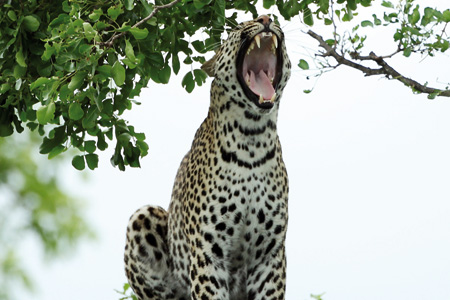 As evening approaches, I admire the desert sunset from a rock perch, swigging fiery whiskey from a hip flask as the sun dips below the horizon.

Battling through the paranoia of being dragged from my sleeping bag by an oversized pussycat, I cook my dinner on a campfire, and set about drinking away the fear.

It works; I slip into a peaceful sleep, though the nocturnal calls of the wilderness travel into my tent and alcohol-addled dreams.

Back in Windhoek, returning the rather beat up 4×4, my reckless driving near Spitzkoppe peak finally catches up with me.

“Have you taken this thing through water?” barks the car rental guy as he surveys the underside of the steaming 4×4 that I hired from him 10 days and 4000 kilometres ago. “The alternator is screwed!”

“Ummm … well … maybe a couple of puddles, but nothing substantial,” I lie. “I’ll have to tow you to the airport then,” he says. He’s not a happy man.

And so, this is how my trip ends, my not-so-trusty steed being dragged along the final leg, one more escapade on a holiday rammed with adventure from start to finish.

It comes as a welcome relief for someone else to drive, just so I can stare across Namibia’s interior and let the previous couple of weeks soak in.

More on the Otjikandero Himba Orphan Village Project at namibiajjtours.com 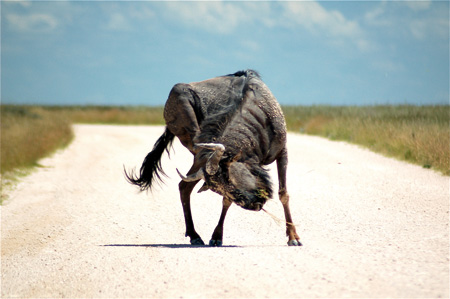 Best of the rest: Natural Namibia

The second-largest canyon in the world, behind the Grand Canyon in the US, Fish River features a massive ravine that splits the south of Namibia for over 100 miles.

Most of us would be content peering over the side from the occasional viewpoint dotted along its length, though the more adventurous can spend five or so days hiking through it.

Permits are only issued between May and September to minimise the risk of sun exposure during summer (the temperature can hit 50°C) and flash floods during the rains. There are no facilities enroute, so pack light. 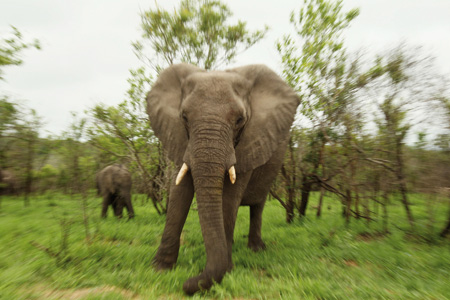 Home to one of the largest colonies of cape fur seals in the world, Cape Cross makes an interesting pit stop along the Skeleton Coast.

Be prepared, though; what sanitised nature programmes can’t show is the stench that thousands of mammals in a confined space can make. If you don’t have your own car, book through Charley’s Desert Tours.

If the San rock art in Spitzkoppe floats your boat, Twyfelfontein offers more examples of ancient engravings. Hunter-gatherers scratched more than 5000 images of their lives into their surroundings, including encounters with lions, giraffes and rhino.

It was named as Namibia’s first Unesco World Heritage Site in 2007.