A weekend in Vienna – what not to miss

Vienna, Austria, with its splendid architecture and heritage, is one of the most magnificent cities in the world. Take in the wide collection of museums, galleries and concert halls before chilling out in the atmospheric bars, taverns and cafés, and you’ve got the makings of a wonderful stay.

Check out the places, churches and parks

The heart of Vienna is crammed with majestic buildings, stately palaces, churches and parks. The best way to (quickly) soak it all up is to jump on a tram and do a lap of the Ringstrasse (ring) – the series of roads running in a circle around the centre of Vienna.

St Stephen’s Cathedral dominates the middle thanks to a massive spire and grand interior.

Schloss Schönbrunn, the palace that was Marie Antoinette’s childhood home, is a microcosm of Vienna – touching on many of the things for which the city is famed. Learn about its royal inhabitants, baroque exterior and the rococo excesses of its interior.

You can also visit the room Napoleon is said to have slept in when he inhabited the palace in 1805 and 1809, and the famed Spiegelsaal (Hall of Mirrors) where a six-year-old Mozart performed.

Outside, there are some spectacular gardens and the world’s oldest zoo (founded in 1752). 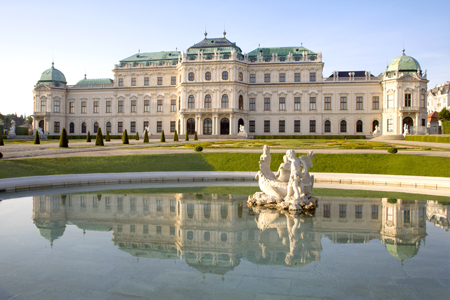 Vienna is the place to soak up a memorable evening of high-art, even if it’s not normally your cup of tea. As for the museums and galleries, unless you’ve got ages, pick a couple from the plethora and do them in-depth.

Vienna’s contribution to global cuisine is the king of hearty foods: wiener schnitzel. Meat covered in breadcrumbs then fried may not sound too appetising, but done well, it’s delicious.

Coffee houses are a local speciality, offering tasty cakes to enjoy with a cup of coffee, and a sophisticated yet relaxed atmosphere.

Head out to the Prater amusement park and climb on board the Riesenrad (Ferris wheel). This 65m tall ride is not hugely thrilling – unless you’re scared of heights or rickety old structures – but it’s a movie star (see The Living Daylights or The Third Man) and a history lesson in one.

Built in 1897 to mark the Golden Jubilee of Emperor Franz Josef I, the structure was damaged by bombs in World War II but rose triumphantly to rotate once more, thus symbolising the reconstruction of Vienna.

WHEN TO GO: Any time, but book ahead for visits in July, August or near Christmas.
GETTING THERE: EasyJet flies direct to Vienna from London for about £60 return.
VISAS: South Africans need a Schengen visa.
CURRENCY: Euro. 1 GBP = 1.21 EUR.
LANGUAGE: Austrian-German.
GETTING AROUND: The Vienna Metro is fast and frequent. For cheap travel, buy a 24-hour travelcard. Trams are a speedy way of getting across the centre of town.
GOING OUT: €5 for a beer.
ACCOMMODATION: Dorm beds cost from €17 a night or private rooms cost from €40.

Now read this:
Vienna city guide
Visit Vienna and Bratislava in one trip
Snowbombing in Austria

A night in Venice