Last month, the South Australia Tourist Commission invited photographer Gary Friedland and I to spend a week exploring Adelaide and surrounds. The city turned out to be super-interesting but it was the countryside that blew us away. Here’s a lowdown on what we saw: three Adelaide daytrips you can easily do by car or bus.

There are many different names for Adelaide. Oldies know it as the City of Churches, but Gary and I refer to it as Radelaide after a piece of graffiti we saw. But it’s latest name – the 20-Minute City – that’s the most accurate of them all. It’s a 20-minute drive from the airport to the city, a 20-minute drive from the city to the beach at Glenelg, and 20 minutes from the city to the Adelaide Hills.

The hills were settled in the 1830s by craftsmen, gardeners, painters and winemakers from Prussia – an empire that later split into Germany and Austria. The new arrivals were refugees: Lutherans fleeing persecution from then-King Frederick Wilhelm III.
Their oldest surviving town is Handorf, named after Captain Dirk Hahn of the Zebra, one of the ships that brought the Lutherans over. Handorf is rich with history and culture – art galleries, historic buildings and the Handorf Academy – and is a great place to get stuck into Germanic food.

To get there, we follow the Princess Highway in the direction of Melbourne as it shoots like a snake into the highlands. At the 27-kilometre mark, Handorf awaits.

We park at the far end of town and go for a walk down Main Street, which has the look and feel of a gingerbread town. There’s a butcher, several bakers and a candlestick maker, a shop that sells possum-skin Ugg boots and another that sells only lavender. Cheese kransky dogs with big servings of sauerkraut are dished out at the Germany Pantry, while apple strudles and poppyseed buns sell like hotcakes at Otto’s Bakery. Lowenbrau, Becks and eight other kinds of German beer as well as Adelaide Hills Cider are sold on tap at the German Arms Hotel.

Things get cheesy down the road at Udder Delights, an artesian cheese shop that does high tea, cheesemaking workshops and cheese wedding cakes – and hundreds upon hundreds of cheeses. After buying a chunk of Adelaide Hills Brie (creamy, soft, rich and gooey goodness) we get a craving for dessert and head to Handorf Hills winery on the outskirts of town, where two over-the-top South Africans do wine and chocolate-matching experience that has to be tasted to be believed. By the time we get out of there, the day’s come to an end yet there’s so much more left to see in Handorf.

“Nearly everyone I hear says the same,” says Mary Anne Kennedy, a tour guide with A Taste of South Australia. “’I wish I had more time. Why didn’t the travel agent tell me how much there was to see here?’” 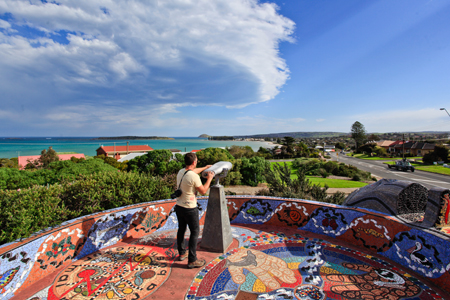 From Handorf, it’s an hour’s drive to Victor Harbour, a former whaling station on the south coast of the Fleurieu Peninsula. Southern right whales were hunted in Victor Harbour from the late 1830s for their oil, South Australia’s first export.

So may whales were killed here a stretch of water near the processing plant was named Shark Channel for all the blood split there. By the 1870s, the whales were gone.

But nature has a way of fighting back. In the 1980s, a century after they became functionally extinct, southern right whales began to reappear in Victor Harbour. You can learn more about them at the South Australian Whale Centre near the Causeway that connects Victor Harbour to Granite Island. Or, you happen to be in Victor Harbour from May to October, you can see them yourself.

Southern right whales’ affinity for coastal inshore waters make them the perfect species for land-based whale watching. Their telltale water sprouts, tail splashes and breaching can be seen from the beach at Encounter Bay.

The whale season was coming to end when we got to Victor Harbour, but a lot of other sea creatures live in these sheltered waters all year round. A really cool way to see them is on a Big Duck Tour.

Cast aside any preconceptions of an outboard motor-powered banana boat – the Big Duck is a 7.3 expedition-style rigid inflatable vessel that cuts through the swell like a knife. Flying Shark Tours would be a more appropriate name.

The Big Duck departs from a launch point halfway along the Causeway, where skipper Dan Irwine fits each passenger with spray jackets and life jackets. Once all 10 passengers are safely onboard, we shoot across the harbour at what feels like 100km/hr.

Within a minute we see a school of bottlenose dolphins gliding under the boat and then – bang! – a dolphin breaches the surface and pulls off a graceful mid-air whip. Then another dolphin does the same.

“We don’t really know why dolphins breach,” Dan explains. “Some say they do it to hunt fish, others say its done to dislodge parasites from their skin, while others reckon they do it just for fun. Either way, I’m glad they do it, because it’s quite a show.”

Out first stop is Seal Island, where we see New Zealand fur seals and Australian sea lions sunning themselves on rocks; one even comes over to say hello! We take a few photos, hang around for a bit, and then zip across Encounter Bay to Shark Alley, where Dan tells us about the history of whaling in Victor Harbour. After that we charge off again, this time to West Island, where we see a much larger colony of seals and a colony of penguins that are in no way disturbed by our presence. The seabirds however go absolutely mental, shrieking and hollering bloody murder as a few inquisitive seals come sniffing around our boat.

When we’ve had enough of that (not that we ever could), our driver heads west again, this time to see the spectacular lichen-covered cliffs of Kings Beach and Waitpinga, before returning to the Causeway. 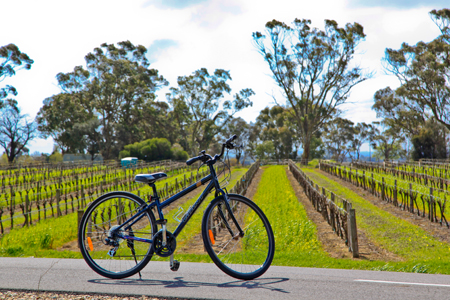 Wine wankers. That’s what most people on the right side of 40 think of people who go around talking about wine. Sure, I like to drink the stuff, but the idea of wine travel – going places to drink it – seems boring as batshit. But when the ferry to Kangaroo Island, an hour’s drive west of Victor Harbor was closed due to large seas, the Barossa winemaking region presented itself as the next most viable option to wrap up this story. Surprisingly, it turned out to be the highlight of our trip and I can now crap on about wine… more or less.

To appreciate wine you first need to understand how it’s made. Inasmuch we drive over the Penfolds Cellar Door in Nuriootpa 45 minutes drive northwest of the city. Penfolds was just another insignificant winery until the early 1960s, when then-chief winemaker Max Shubert shocked wine snobs in Europe with his Grange Hermitage Shiraz that went on to win every medal in the book.

To get a taste for Max’s magic, we partake in a Penfolds Make Your Own Blend experience. After donning white lab coats, we’re led into a state-of-the-art laboratory setting where a wine educator tells us about Bin 389. It’s one of Penfolds more affordable drops (it costs $50 a bottle whereas the cheapest Grange costs $575), it’s made of unequal parts Grenach, Shiraz and Mourvedre ‘varietals’. That’s wine talk for different grapes. See, I’m learning the lingo already.

“What you will be doing here today is what winemakers do but on a much smaller scale,” the educator says. “It’s about having a play with different percentages of varietals and seeing what you think is the best combination.”

Gary and I spend the next hour splashing around beakers and glass tubes full of wine until finally, my combo is ready. I give it a taste.

“Bitter,” I tell her, when what I mean to say “bloody awful”.

“That’s not a word we like to use in winemaking,” she says.

”Oh.” Soon after, we say farewell and leave. Our knowledge and appreciation for fine wine on its knees.

Later in the afternoon, we rent a couple of bikes from Barossa Bike Hire and cycle over the Angaston, a historic village 6km east of Nuriootpa. The bicycle path we follow cuts through endless rows of vineyards and green rolling hills. It’s a beautiful ride and Angaston itself is cute as a button, like Handorf but with a decisively English feel. Angaston is home to Shulz Butcher, the most awarded butcher in Australia, famous for its Barossa Valley bacon that’s smoked using redgum sawdust for two days. All the most expensive restaurants in the country buy their bacon from Shulz, as does the Angaston Roaring 40’s café down the road. Like Shulz and old Max from Penfolds who passed away in 1996, Roaring 40’s head honcho Damon De Roiter has won a stack of awards for his pizzas.

“What we do is we basically put the Barossa on a pizza. We use Barossa, meet, flour, cheese, vegetables, herbs – it’s all local, organic produce, as good as it gets,” Damon says, bringing out a tasty, crusty, cheesy monster of a pizza layered with chicken, bacon, olives, avocado, pesto and brie.

The pizza is good. Not the best I’ve ever had, but pretty damn good. Yet what will stay in my mind (and taste buds) was the Shiraz wine Damon served with our lunch.

Roaring 40’s café is also a cellar door, and it’s where Damon sells the few hundreds bottles of Outlaw wine he makes every year. ‘They give the palate an explosive ride, a Barossa Shiraz has noting to hide,’ is the brand’s motto.

So what did it taste like? Well, I still can’t use terms like ‘fresh cut grass’, ‘pepperberry’ or ‘tannins’ with any authority to describe it, though I can tell you it was like drinking liquid silk. It was that good.

The Big Duck (thebigduck.com.au) does one-hour tours of Victor Harbour at 11am and 2pm for $55 a head. A Taste of South Australia (tastesa.com.au) charges $127 per person for half-day tours of Handorf. Barossa Bike Hire and Cycle Tours (barossabikehire.com.au) will rent you a bike for $35 a day. Port Elliot Beach House YHA has dorms for $22 a night while private rooms are a bargain at $72. For bookings, (yha.com.au) See: southaustralia.com for more.