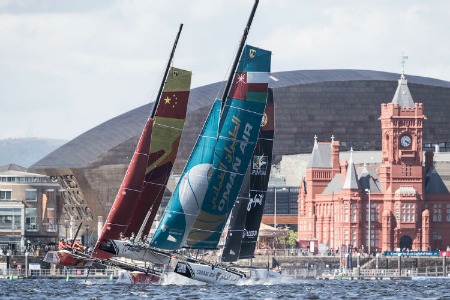 The regatta is one of the first events of the Cardiff Festival and includes seven international teams and some Australian sailors such as James Wierzbowski, Luke Payne and Ed Smyth, who also holds a Kiwi passport. Amongst the Kiwi sailors, the circuit includes match race champions Hayden Goodrick and Chris Steele and Youth America’s cup sailor Steward Dodson. Almost a fourth of the fleet sailors are either Kiwi or Australian.

The adrenaline-fuelled Elite Level Extreme Sailing Series is a unique concept, pitting some of the very best professional sailing teams in the world against each other on identical GC32 hydro-foil ‘flying’ catamarans, on challenging, tactical courses, but close to shore to provide spectacular, stadium-style entertainment for the public, a format that has been recently copied by other competitions such as the America’s Cup and the Olympic Games.

The original Stadium Racing format pioneered by the Series has been revolutionary for the sport. It has brought the boats and the action to the public like never before, putting guests at the heart of the battle with the unique ‘Guest Sailor’ spot and dramatically increasing the pace on the water that result in great footage and photography. 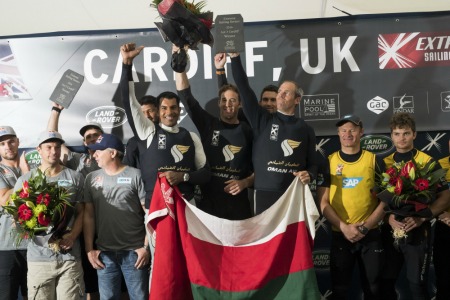 The sailors from seven teams and up to 13 nationalities are some of the best in the world: Olympic, America’s Cup, World Champions, offshore legends and record breakers. It is elite level, high performance sport. The sailors come from Australia, New Zealand, Denmark, the UK, the USA, China, France, Italy, Portugal, Spain, Switzerland, Ireland, Oman and Austria.

So far, this circuit has been to Muscat (Oman) and Qingdao (China) Cardiff, Hamburg (Germany) and now heads to Saint Petersburg (Russia), Madeira (Portugal), Lisbon (Portugal) and Australia, where the 2016 season will be crowned in December.

TNT caught up with two of the Series sailors while they raced in Cardiff: Ed Smyth and James Wierzbowski, from Oman Air, the team which is currently leading the standings this season, and this is what they had to say:

Question – Ed, you are half Kiwi and half Aussie…

Ed – Yes, I was born in Melbourne and grew up in New Zealand but I call myself a New Zealander. I am living in Sweden at the moment it’s where my wife and son are from, so I’m quite multi-cultural and international.

Question – And James, you are from Australia?

James – Yes, I was born in Melbourne also, my dad is an Aussie and my mum was born in England so I have a British passport as well. But I definitely call myself an Australian.

Ed – OK, I’ll use the cliché: it’s Formula One on the water I guess, so Formula One racing but with sail boats so it’s crash and burn, high intensity and a great spectacle for people to come and watch.

Question – Anything to add, James?

James – Yes, I guess the biggest difference is the venues we go to, we’re not sailing off over the horizon and coming back later on in the day, it’s all in tiny bays usually in the middle of a city, lots of races and short fast laps. It’s called Stadium Racing.

Question –Ed, you have been doing these for quite a few years with different teams mostly under the Omani flag. How did you actually get involved in the Extreme Sailing Series, what’s your background as a sailor and what has been the evolution in the transition particularly in the Series?

Ed –My background as a sailor was fundamentally Skiff sailing as a junior and Olympic class sailing and then I went into the America’s Cup which when I did it was in a monohull boat and then when they changed to the multihull boats I had to re-skill and I had the opportunity to join the Oman Sail group with The Wave, Muscat in 2012 and that opportunity was through Peter Greenhalgh, our mainsheet trimmer, who I knew personally and raced against when I was doing the Olympics sailing,  so that’s how I got to where I am today.

Question – James, this is your third season and you’re a bit younger than Ed, can you explain also what your background is and what brought you into professional yacht racing and why you ended up in the Extreme Sailing Series?

James –I’m 24 years old and I’ve never been to the Olympics but again, the same as Ed, I started sailing in an Olympic class, mostly in a catamaran called the Nacra17, and as well as on a Skiff called the 49er. Between those 2 boats they are both the fastest boats in the Olympics so I’ve also been into this high performance, high speed racing and it was really the Red Bull Youth America’s Cup, when I represented Australia, my kick starts into big catamarans and from there those two things go so well together that I managed to get the opportunity on the Extreme Sailing Series.

Question – And one of the peculiarities of the Series is all the different countries that the circuit visits each year. The Series goes through all these amazing locations. Question to you Ed, what would be your favourite of all of the ones that you are doing this year and why?

Ed – I think this one in Cardiff is one of my favourites, it makes you feel like you’re sailing at home I think a little bit and due to the fact of the conditions and the weather and it’s a great venue down here on Cardiff Bay but I would still probably say Sydney is closer to home and a real spectacle being on the harbour there and warm weather and you know that time of year December is always a good time to be down under.

Question – Same question to you, James?

James – Quite similar to Ed; Cardiff always brings us good breeze, but it’s a bit cold for me usually so for that reason I’ve got to say Sydney. Just being on Sydney Harbour in December is amazing. There is so much happening and you’ve got the Harbour Bridge Opera House in the background. You can’t beat Sydney Harbour.

Question – Let’s talk about Oman because ultimately it’s not only one of the destinations of the Series but is the flag that you guys on your boat fly with pride. What can you tell us about Oman as a destination and sailing venue?

Ed – Oman as a sailing venue is fantastic; it’s actually very comparable in terms of the conditions you get to Sydney or even here in Cardiff. You get good sea breezes. As a destination it’s fantastic; it’s got some amazing countryside actually and there’s lots to explore and I ’d recommend it to anyone going there for a holiday.

Question – What about you James, what do you have to add to this, what’s your favourite spot in Oman?

James- Best thing about Oman has got to be the water temperature, it’s always nice to race these boats there and this year we had the opportunity to go down to the old town in Muscat which has unbelievable scenery, the cliffs on the waterline are amazing and we had great breeze so: strong wind and warm water and warm weather it’s all we are looking for.

Question – You two are from similar backgrounds in terms of what you do as in the boat that you race for or your nationalities or half nationalities in your case Ed. Ed, what can you say about James? You race together: how can you describe what he does on water and why is he at the level of professional sailing that he is at?

Ed – I think James is at the level he is at because he is young, fit and hungry which counts for a lot and that’s why us older sailors need to have that on board. But also for his age he is very level headed, he’s good a good temperament on him and that counts for a long way when you’re trying to get into this sport as a young guy.

Question– And now is your turn James: what can you tell us about Ed?

James – I did my very first event in the Extreme Sailing Series in Russia and Ed was sailing on the same team as I on GAC Pindar at that point and it was really good to step into the class and do my first event with Ed on the boat. Obviously he’s done a lot of America’s Cup campaigns which is a big goal of mine and he’s done everything that I aspire to do so it was good to have that role model straight away in my first event of the Series. 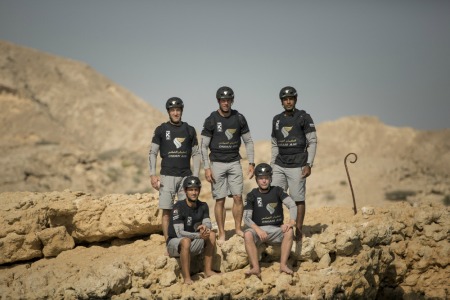 G’Day Cobber! How to be an Aussie

Spellbinding Turkey: We travel to the ancient region of Cappadocia…

Food and Drink: Work In Progress