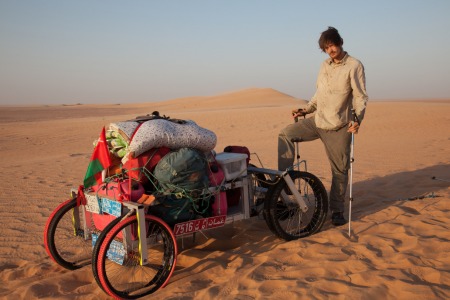 Other journeys include 14,000 miles solo on a bicycle from New York to Hong Kong, a folding bike trip around the British Isles to climb the Six Peaks, a human-powered descent of the longest river in Iran, the Karun, and a crossing of Argentine Patagonia on horseback.

So what’s next for Leon?

You’ve just returned from a 1000 mile walk through the Middle East. Can you tell us about your highest and lowest points along the route?

It’s tempting to say that the highest point was Mount Sinai, and the lowest was the Dead Sea, but that would be facetious! The best parts could roughly be divided into those that I experienced in the communities I passed through – spending an evening stargazing with the Bedouin, sipping sweet tea and eating chunks of chicken on a hillside in northern Jordan – and those moments I found alone in the wilderness – coming up over a pass late one afternoon to see the Dead Sea stretching out before me across the Jordan Valley, reflecting the setting sun back across the hills. The harder moments were when I had too much of that time alone, particularly when I was carrying a couple of days’ worth of food and water. A heavy pack, 14 hours of walking and no-one to talk to is a great recipe for making me grumpy.

Was the route planned out on advance or did you make some last minute changes?

It was more or less planned but, as with all good adventures, it changed and morphed as I walked. I followed a series of new hiking trails in the region – the Masar Ibrahim (www.masaribrahim.ps) in the West Bank, the Jordan Trail (www.thejordantrail.org) and the Sinai Trail (www.sinaitrail.org). Those gave me a great backbone for the journey and allowed me to connect my starting point in Jerusalem with a suitably epic end point atop Mount Sinai.

Would you recommend the route to out adventurous readers?

Absolutely. The trails are still very new, but there are maps and GPX data available. In many places I was one of the first people to walk them outside of those who established them, which was quite a privilege. I’m happy to report that they’re a wonderful and audacious endeavour – they are adventurous enough to allow you to enter real, rugged wilderness, yet they also give some structure and help ensure an immersive human-focused experience too.

Your latest film Karun was released in November 2015. Can you tell us what it’s about?

In early 2014 I set off, with my friend Tom Allen, to follow Iran’s longest river from source to sea. That river is the Karun. We immediately got caught up in snow blizzards at high altitude, and everything went wrong (in the best possible way) from that point onwards. For 6 weeks we followed the water from the Zagros Mountains down to the Persian Gulf, and I had one of the wildest adventures of my life. What we also saw though was another side to Iran – one very far removed from the negative picture so often portrayed in Western media. It’s one of the friendliest and most beautiful places I’ve ever been.

Your first book The Road Headed West is about your cycling adventures across North America. I’m planning on doing the same thing next year on the Amtrak train. Any tips on things to see and do along the route?

The greatest thing about North America is how diverse it is. I had no idea when I set off from New York, heading west, about just how much things would change before I reached the West Coast. So my advice is simply stop regularly! Admittedly there were arts of the mid-west that were very (very) dull on a bicycle, but from South Dakota westwards it was incredibly beautiful. The Badlands and Yellowstone National Park, leading to the Rockies, were one of my favourite sections of all.

You’ve been on a whole host of journeys. Does anyone in particular stand out on your mind?

They’ve all been special for one reason or another. One of my favourite though was crossing the Empty Quarter on the Arabian Peninsula – 1000 miles across the largest sand desert on earth. It probably sounds awful, but it’s one of my fondest memories. The desert is a great place to give space and time to think, and life became so wonderfully simply. It was also beautiful to be able to sleep wherever I pleased – just to stop for the day when I was tired, lay out my mat and fall asleep with the most incredible view of the stars filling the sky.

Can you tell us about your favourite place on earth?

I might be biased, but I think the north coast of Northern Ireland (where I grew up) is the most beautiful place on earth. I try and go back at least once a year. It’s quite a small area, but it’s a great mixture of wild ocean, rugged coastline and green rolling countryside.

Where do you think your fascination with long distance and human-powered expeditions originates from?

Perhaps from growing up on the north coast of Ireland! I’ve always enjoyed being outdoors, and when I finished university I set off to cycle across America while I figured out what I should do with the rest of my life. I realised that I got a real kick from travelling by human power – by having to put in a lot of physical and mental effort to make the journeys happen. I also simultaneously realised that I enjoyed the challenge of reporting back with what I found; telling stories from the road. Those two revelations convinced me to try and make a career out of it. I also grew up reading the classic expedition books by Shackleton, Scott, Thesiger etc, so I suppose that was an influence too on my interest in the endurance capabilities of humankind.

Any tips for our readers that are thing about getting into travel writing and filmmaking?

As boring and unoriginal as it sounds, both endeavours are reliant on a) having a story to tell and b) developing the skills to tell it. The biggest tip I can give is to simply encourage readers to go out and do something that excites them. They may not have the money/skill/time/reputation that they’d like to plan their ideal trip, but if we wait around until conditions are perfect, then it’s more likely than not that it’ll never happen. So – just go! Then practice – build skills. Create things and show them to other people. Take feedback, and expect to be rubbish to begin with, but also expect to get better. It’s a constant learning process, and far from easy, but ultimately very fulfilling!

What does your first ten hours of returning home usually consist of?

I’m not sure! I’ve very recently returned from the journey in the Middle East, and I’m going to write a book about that over the next few months. After that, I’ll be off again, but to a destination as yet unplanned.

Can I come with you?

If you can guess where, then yes!

Bob Dylan to perform at the Grammys