After two series of the Johnson show, Harris steals the show and wraps up victory over the world’s apparent finest

The rest will go down in history as the No1 Test nation in the world’s first series defeat in five years.

Harris has operated in the shadow of the short and explosive spells of Mitchell Johnson that have torn England to shreds and at times South Africa in this series, but it was Harris who took the chance to shine in the last half hour of the last session of the third and deciding Test at Newlands, Cape Town.

Set a final innings total of 511 to survive, the only option for the hosts when sent in for the last session of day four was to attempt to survive.

In the end though, South Africa was all out in their second innings for 265, with Vernon Philander stranded on a  stubborn 51 not out.

More importantly, they couldn’t survive the 27 more minutes they needed to.

Remarkably, despite being the top-ranked nation in the world, the 2-1 series defeat means South Africa have never beaten Australia in the time since they rejoined world cricket in 1992. 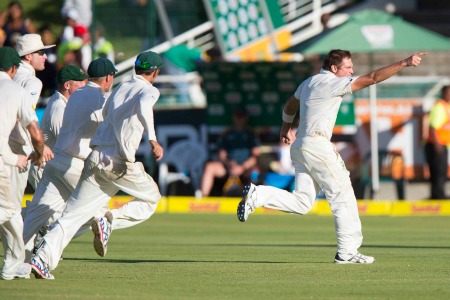 Clarke had no shortage of praise for Harris when the hooting and hollering was done.

“I didn’t know if ‘Ryno’ had anything left in the tank, but I think he and Mitchell Johnson have been our two best bowlers over the past 12 months, even longer . . . I thought if we’re going to get over the line, these two guys are the blokes to get us over the line,” he said.

“He just seems to find a way. You ask him to bowl he will bowl. He’s got no energy left his body is killing him he will find a way to take a wicket for us. As captain you can’t ask for more.”

The ghosts of Adelaide 2012, AB de Villiers and Faf du Plessis looked set to repeat their feat at one stage, lasting through to the final session of the Test.

But when Harris removed de Villiers caught behind and Steven Smith shocked du Plessis with a successful LBW review it was a tough ask.

JP Duminy was up for the fight lasting 105 balls for his 43 before tickling Johnson to Nathan Lyon at shortish fine leg.

This left the three fast bowlers to survive an hour and a half, it was a big ask but only just.

Philander, the bowler, again showed the batsmen how it’s done and got himself the 50 he was denied by his teammates in the first innings.

Cue controversy. A Johnson bouncer caught Philander’s glove and Alex Doolan finished the job at short leg, so the umpire thought. The batsman challenged the call though and the video umpire decided his glove wasn’t touching his bat at the time. He survived. 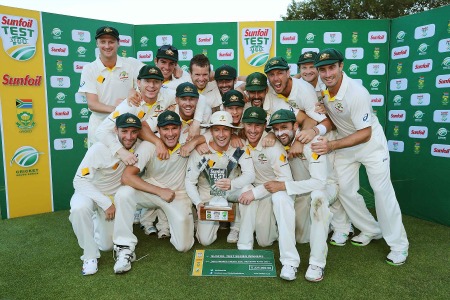 Clarke and Dale Steyn had words at the drinks break which followed, and had to be kept apart by the umpires.

Tensions were high. An hour to go.

Lyon struggled to trouble the tailenders, so Shane Watson was called upon.

Johnson too was ripping in but in the knowledge of all that he was good for only three or four overs a spell.

Desperate, the Aussies reviewed an LBW shout for Philander that would have missed another set of stumps. Reviews gone.

With five overs to go though, enter Harris. He would bowl three of the last five overs of the Test, but he only needed three balls.

The first, a yorker, somehow clipped the off peg and Steyn was removed.

Then out came Morne Morkel, the man who’d terrorised the Aussies, particularly captain Clarke with the ball.

A gesture from coach Darren Lehmann told his bowler to pitch it up and go for LBW or the stumps. As if he needed to be told.

Limping as he walked back to his mark, and with a knee operation imminent after this Test, his third ball ended the series by clattering into Morkel’s stumps.

While not going overboard, Clarke was asked to compare the 2-1 win over South Africa with the 5-0 Ashes whitewash over England.

He said “an honest assumption would be that it’s as good”.

“The number-one team in the world have fought their absolute backside off to not give us the game, and we’ve had to fight even harder to win the game. We will learn from that,” he said.

While it was the bowlers who wrapped it up, man of the match went to David Warner for his 135 and 145 runs. 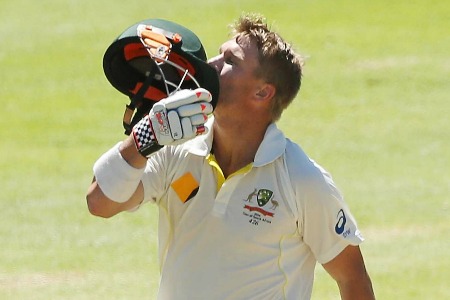