To understand the utter vastness of the Australian continent, come to the very middle. The flight from Sydney to Alice is roughly as long as a flight from London to Bucharest. On the European trip you’d cover about eight countries in the time it takes you to cross half of this one. Out here, there is space to stretch.The landscape is ancient, stark and beautiful, while the wildlife is plentiful, fascinating and – because this is the Australian outback – sometimes deadly! You’ve heard of Uluru, but did you know there are stunning rock formations and ancient mountains much closer to Alice?

Towards the end of the flight, drive or train trip, the flat-as-a-pancake horizon changes. The MacDonnell Ranges (pictured left) are one of the oldest mountain ranges in the world, rising from the sand to dominate the landscape. The 223km world class Larapinta Trail winds through them.

There’s a real sense of isolation and quiet out bush, and camping under the silence of a million stars is the perfect way to round out the day. Watch the sunset on the panoramic rock formation at Rainbow Valley, take in Ormiston Pound from a helicopter, sit under ancient trees at Palm Valley or by big red cliffs at Trephina Gorge. 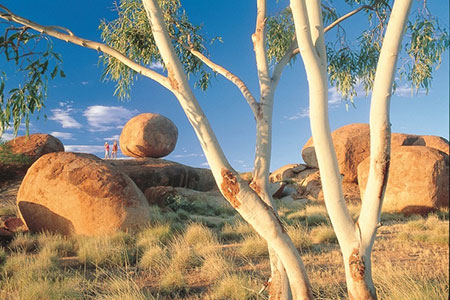 If you need to cool down, jump in Ellery Creek Big Hole, a dark waterhole so deep it’s always cold. However, beware. On average there are 17 days over 40°C each year in Alice, so bushwalking is not recommended in summer. Even in winter you should carry plenty of water and wear sun protection. Tell someone your plans and always check conditions with local authorities before you go.

You will see plenty of birds and lizards around town but if you get just a bit out of town you could see kangaroos, wallabies, eagles, falcons and, of course, snakes too. The Red Centre has more than its fair share of creepy crawlies, both dangerous and benign. One to keep an eye out for is the western brown snake – one of the most world’s most venomous slippery guys. 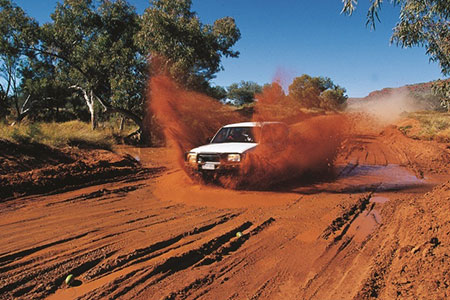 For an up close, personal and safe look at them, and other creepy crawlies, go to one of the daily talks at the Reptile Centre. For guaranteed sightings of big red kangaroos and other native cuties, head to the Desert Park – a kind of open plain zoo in the shadow of the red ranges.

The daily bird show is a highlight. Don’t be alarmed if you see a camel or two on your trip through the Centre as well. They were brought here during colonisation because they were so well suited to the environment. They now outnumber humans and are being culled. Unfortunately there is no culling programme for the flies. Nearly 20 per cent of Alice’s population are indigenous.

If you want to learn more about the Arrernte and other local groups’ long history check out the Museum of Central Australia and the Albert Namatjira Gallery at the Araluen Cultural Precinct, the Mbantua Museum and Gallery in Todd Mall, and look into doing a cultural tour. Catch a glimpse of an Aboriginal community and learn about the missionary history at Hermannsburg, an hour and a half’s drive away. 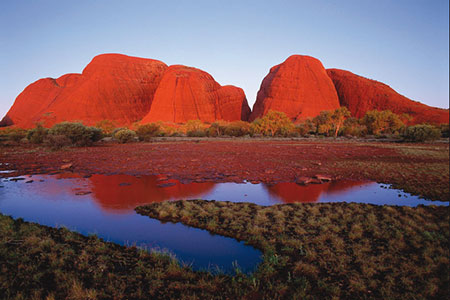 Colonial history is best seen at the Telegraph Station Historical Reserve just north of town. It was the original site of the town, chosen for its usefulness during the construction of the telegraph line from Adelaide to Darwin in 1872. It became a school for Aboriginal children and is now an excellent museum in a lovely setting. It’s a short walk or ride from town, along the river.

The Aboriginal art scene has its roots in the Western Desert communities north-west of Alice. The gorgeous Papunya Tula gallery descends from this movement and is entirely owned and directed by Aboriginal people. For something a little more budget, try your luck with the ladies on the grass opposite the gallery – they are registered to sell their own artwork to you at a fraction of the cost of the top galleries.

Whether you’re interested in the indigenous, pastoral, transport or other history of the region, see the visitor information centre in the middle of town for directions to other museums.