When Neil Diamond sang the line, “Like the clickety-clack of a train on a track… it’s a beautiful noise,” I wondered if he’d ever travelled on the Indian Pacific. Indeed, it’s a romantic song line and a romantic train line, but the rumbles, clanks and other ominous things that went bump last night delayed my snoozing.

That’s until my own not-so-beautiful noise (you know, that blunt throat snore that we all deny we do) woke me up at cock-shout, to a dusky pink swirl of sunrise. Its pastels flashed along the silver trims of the window, where I got to live that Poirot moment: waking up in a sleeper-cabin, thankfully with no corpses stashed behind the upper bunk. But let me derail for a moment (I know, I know) back to the start of this Indian Pacific outback Christmas trip. 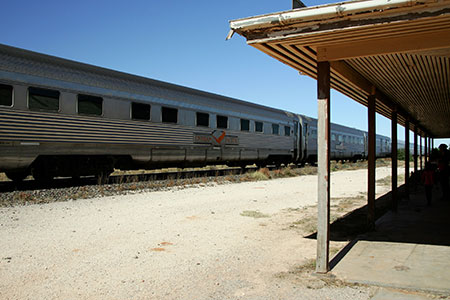 So we left Sydney with the cheers from the crowded platform fading. After winding through the haze of the Blue Mountains (or was it the haze of the bar’s Boags?), the 22-year-old Aboriginal singing diva kicked off another heaving concert at Bathurst station. I wondered if I’d develop throat polyps that night!

Wheels again in motion, we continued crossing the 4,352km of kaleidoscopic terrain. I could have got used to my sleeps-on-wheels travelling bed making its way through, one minute, suburban NSW, the next, a panorama of desert oaks. Mingling in the Outback Explorer Lounge, it was clear that fellow passengers were already in vino mode, as the conversation had turned to the convenient rhythm of rail travel… in bed.

We were still chortling when the seductive vegetable and lemon myrtle pastries were served. Waiters are handsome on trains. While feasting on the scrumptious food, fellow trainee (apologies), Andy, said: “In its early days, The Ghan (the Adelaide-to-Darwin train) got stranded by flood. Apparently, the menu became any kangaroo that came within a bounce of the rifle.” 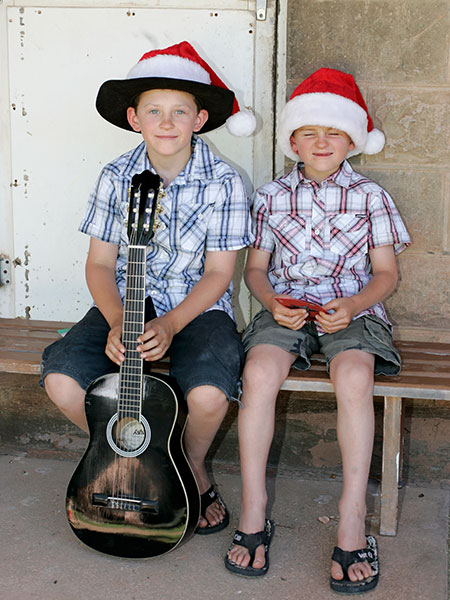 After polite, nervous laughter, we all glanced at the beef on our plates and didn’t ask where it was sourced. A wildlife show of five emus, a buffalo and a gang of goats (alive ones) passed by, before I crashed for the night, watching the shadows of inner NSW dance beneath a clear sky scrambled with stars. Delays overnight meant having to skip the concert at the silver city of Broken Hill.

But Jessica hopped off the train for hugs and photos with tearful fans. After peeling her from the feverish crowd, we assembled in the lounge to meet Captain Matthew Cosier of the Royal Flying Doctor Service, who was on-board to raise awareness about their vital work.

The RFDS began in 1928 with the aim of reaching rural communities with limited access to medical facilities. We found out that Reverend John Flynn, who pioneered this aerial medical service, would buy you a six-pack (his face is on the $20 note). Matthew gripped us with fascinating tales.

“When there is no official runway, communities plant plough discs in the ground,” he said, “lined with diesel-dowsed toilet rolls. Ignited, they act as flares to navigate us in.” At the Adelaide station concert, one emotional and grateful dad introduced Jessica Mauboy’s gig. On the day that a donor liver became available for his sick son, all scheduled flights had been booked. 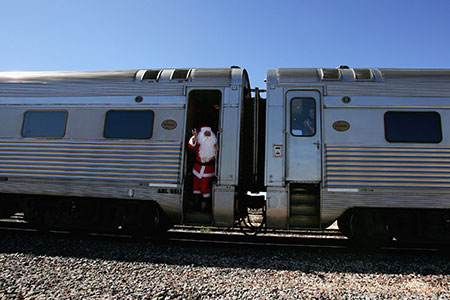 Reverend Flynn’s heroes picked them up and saved the boy’s life in the nick of time. So the flying doctors’ miracles come in many guises. Choo-chooing through South Australia, the landscape turned to yellow fields and rusty tin huts. Grey nomads towed their worlds behind them, and a van stuffed to the gills with backpackers, towels flapping and tinsel whipping from the window, followed. Happy days.

At Watson (little more than a sign in the dust of the Nullarbor Plain), we tumbled off the train to a mob of several hundred Aboriginal kids, parents and elders from isolated outback communities, eager to meet their idol, and of course, the man in red. A class from Oak Valley Aboriginal School made their annual pilgrimage from around 250km away.

Shy at first, their eyes lit with expectation as Jessica kicked off, unplugged, cross-legged on the ground. Throngs spilled out of their tents and utes and tentatively gathered around. Then a young girl, overwhelmed by the spectacle, came forward, bursting into tears. The parched desert air absorbed the wetness from my own cheeks.

For much of the next seven hours crossing the Nullarbor Plain, just ruby bush and saltbush painted the passing canvas as we hit the world’s longest dead-straight section of railway, measuring 487km (I had a ruler). Its hypnotic, Groundhog Day-like effect had me wondering if trees were hopping or kangaroos were growing from the mallee scrub. 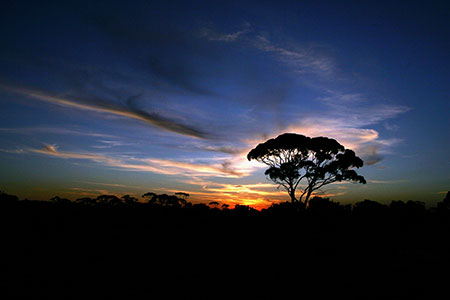 Arriving at Cook, the ghost city at the centre of the Nullarbor, we rolled into a skeleton of a town where four souls permanently reside. I would have gone for a quick swim, only the pool was a little busy growing weeds.

Two corrugated iron gaol cells stood nearby, and I didn’t want to adjust the train’s headcount later. So when the gift shop’s signboard politely warned: “Any arsehole that steals from this camp will be gut-shot and left for the eagles to feed on,” I tried to pay twice for my stubby holder (just to be safe), but was reassured by the lovely shopkeeper that it really wasn’t necessary.

Leaving Cook, neighbour to nowhere, Jessica Mauboy visited our lounge and shared her childhood story growing up in the remote Northern Territory. Inspired by country icons such as Alan Jackson and Patsy Cline, she won her first prize at the age of 11, before winning an ARIA award. “Seeing hope, trust and happiness on these kids’ faces,” she said, “it gets me deep inside!”

Halting at remote Rawlinna, a lime-mining outpost, we were showered upon by a strapping bunch of jackaroos (was I in heaven?). They’d stepped out of their 2.5 million-acre sheep station (that’s half the size of Wales by the way), yet I couldn’t hear an Ennio Morricone soundtrack. Although they weren’t quite sure what to make of our young, funky diva, we soon spotted that inside the steel-caps of these hardy Stetson-bedecked men,
toes were tapping.

Jessica bravely headed over for a post-performance mingle, and all manner of animated banter erupted. Within minutes, she’d been stetsoned… not that I was jealous of course. 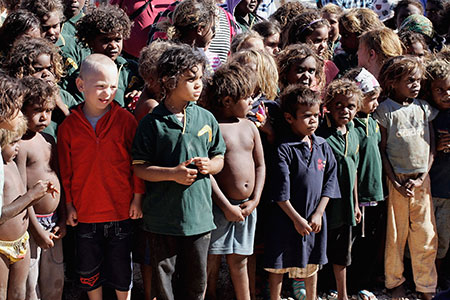 At Western Australia’s Kalgoorlie Station, Jessica and a group of painted local Aboriginal children performed beneath the balmy night sky, before a bunch of us headed off for a whistle-stop tour of the Golden Mile.

We then diverted off to see where all this grandeur stemmed from: the Super Pit (no, not Brad). Its Uluru-sized cavity is named appropriately: at over 400 metres deep it’s the richest gold reserve in the world.

It later became clear where some of that wealth ends up. Heading back to the train, the coach curb-crawled alongside several working brothels, intrigued eyes hanging out on stalks.

Incidentally, the law bans brothels from operating on the same street as the police station, yet here they all stood, erect, on one. The loophole? The council changed the brothel end of the street’s name. Classic.

Down at Matilda Café in the Red Service section of the train (the backpacker’s haunt), I befriended Irish travellers Kieran and Berni. “The experiences you come across on a train,” cackled Berni, “you’d never get on a plane. Early this morning, we all awoke to a bloke doing yoga at the front of the carriage. Some joined in, but it was hilarious, as none of us had a clue about chanting. And this guy was in full ‘Ommmmm’ mode – at 4am!”

My unforgettable Christmas journey terminated in Perth. To a thronging crowd, the finale was Jessica’s rendition of Mariah Carey’s, “All I want for Christmas is you”. And this really was a most beautiful noise!