Amber Heard’s arrival in The Rum Diary can be added to the list – her character, Chenault, emerges from the luminescent waters of San Juan, in Puerto Rico, a vision of unobtainable beauty – a mermaid at midnight – that leaves Johnny Depp’s character, boozy journalist Paul Kemp, slack-jawed and besotted. As glamorous as it might appear on-screen, though, Heard insists it was not so pleasant to film.

“It was a very cold, very deep bay. The water is murky on a good day – I couldn’t even see my elbow. They told me they had a diver down there to ward off any creatures. Like one diver? What is he going to do if a shark comes?” Heard recalls. “Later, we were on the boat, standing on the edge, looking out over the bay – there were lights hitting the water and we could see the creatures swimming past the boat. When I could see them, I was mortified that I was swimming in there, pretty much naked. At the end of the day, it was probably worth it, but it was not fun.”

On the flipside, Heard was in her element in the exquisitely filmed scenes where she and Depp drive along Puerto Rico’s immaculate coast. Looking every bit a matinee idol and flirting outrageously, she eggs him on to drive their borrowed classic car, a cherry-red convertible, ever faster. It was, Heard says, a good day at the office.

“I’m in this ‘58 Corvette with Johnny Depp, driving up the coast of Puerto Rico on this beautiful summer’s day, and I thought, ‘no matter how this turns out, this is great. I like this scene’. They did not let me anywhere near the steering wheel of that car. It’s probably a good thing. I would have done significant damage.”

Inseparable from the story told in The Rum Diary is the story of its author, legendary journalist and hell-raiser Hunter S Thompson, who wrote the novel when he was just 23 but failed to find a publisher. Thompson went on to forge a career as the unhinged, inebriated, shotgun-wielding pioneer of gonzo journalism, a man whose most famous work was Fear and Loathing in Las Vegas, which was also adapted to film with his close friend Depp assuming the lead role. However, The Rum Diary, Thompson’s tale of a jaded journalist trying to reconnect with the world, via the bars and backstreets of San Juan, sat moldering in his basement until being published in the late 90s. Depp soon resolved to bring it to the big screen. And such was his commitment to the project, perhaps heightened following Thompson’s suicide in 2005, that Bruce Robinson, who made his name by directing cult classic Withnail And I, felt he had little choice but to sign on, adapting the screenplay and then calling the shots on set. 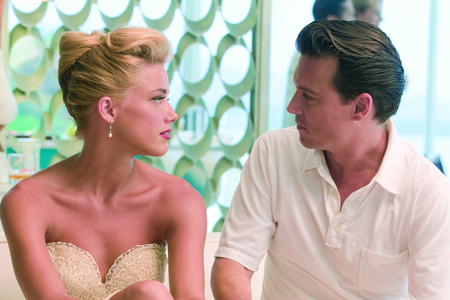 “It was basically Johnny – I don’t think I’d have done it under any other circumstances,” Robinson explains. “When you’ve got a guy of his talent and his stature nagging you down the line – his confidence in me was very reassuring – it’s his funeral. I finally said, ‘Oh bollocks, I’ll have a go’.”

And, as the man tasked with taking Thompson’s splenetic prose and adapting it into a film, Robinson is adamant that Heard’s role, skinny-dipping and joyrides aside, transcends mere decoration. Ostensibly, her character is Depp’s leading lady – one third of a love-triangle that pans out like The Great Gatsby in reverse – but there is a subversive edge to it. Chenault is, without getting lost in abstractions, a cypher for a kind of air-brushed, aspirational perfection.

“She’s a shorthand – the thing that obsessed Hunter all his life was this notion of the American Dream. All his work obsesses on that concept,” Robinson explains. “She’s the dream girl – that’s why she got cast – she’s like every boy’s fantasy, that lady. But the dream can be quite cruel and those who run the dream are ruthless people. That’s what I was trying to say, and so was Hunter S Thompson.”

Heard is a fan of the original book, and of Thompson’s work in general, so the allusion is not lost on her; nor is the requirement for a rarefied kind of physical beauty – hers, as it happens – to dramatise it. “She, on the surface, epitomises not only the American Dream but the people who own it,” Heard says. “I liked that she looks likes an archetype of a leading lady – this 1950s housewife in the making and an iconic symbol of a woman at that time – a commodity that wealthy men strive to obtain. 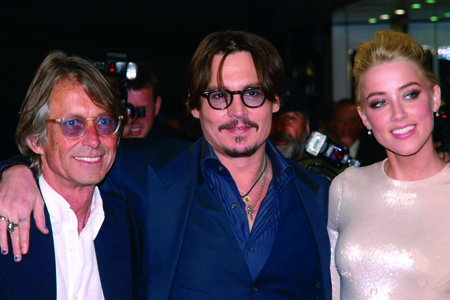 “She represents all that, superficially, on the surface, yet is not that underneath. She’s flawed and vulnerable and fiercely independent and rebellious. She’s the kind of girl who will sneak out of a party to go skinny-dipping by herself in the ocean. I kind of like that about her. She’s a rebel. I like that she’s not what she looks like.”

It is hard to conceive a neater segue into a discussion of Heard’s career. Undoubtedly, her roles to date, in a variety of action movies and horror flicks, have traded on her appearance – her wholesome, Texan good looks shot through with a streak of bad-girl lasciviousness.

“I am aware that the way I look puts me in a certain category,” she concedes, with a level of understatement that does nothing to detract from her frustration with an apparent ‘blonde ceiling’. According to Heard, being sexy gets your foot in the door, and then it gets you typecast.

“We categorise women in one of two ways and if you’re seen as beautiful or sexy then your only options in terms of character descriptions are beautiful and sexy. That affords you a certain amount of opportunity but that opportunity leads to a spark and never a flame,” she says.

“The other category – there’s a lot in there – you can be seen as witty, intelligent, independent, you can be seen as a bitch, as vulnerable, as smart or as funny. People might take you seriously, but you cannot be beautiful or sexy. If people see you that way, then you are out of that category. It’s incredibly limiting.”

Heard, like Chenault, is determined to break the mold, to prove she’s more than the sum of her appearance – as undeniably appealing as it may be. ”I want to create characters for as long as I can and tell stories for as long as I can,” she says. “But unfortunately, I’m not given those opportunities because I’m often boxed into the first category, but I’ll continue to try to blend the two as best I can. I’ll try.”