Ameristralia, fuck yeah! Petition started to unite America and Australia into one country

The ‘We the People’ section on the White Houses’ officials website has received a number of humorous petitions in recent months ranging from the construction of a government funded Death Star to the release of the recipe of the President’s very own beer, but none have been quite so strange as this one.

Some bright spark has apparently called for America and Australia to be joined together, to form a global super power the likes of which hasn’t been seen since the 1980s.

D.A, the petitioner from Beverly Hills in California has already managed to get nearly 5,000 signatures for the petition but remains about 95,000 short of actually getting the government to address his issue.

Needless to say the response on the Internet however has been both prompt, and hilarious.

Users of the website Reddit have taken the ball and run with it, so to speak, quickly cobbling together Ameristralian flags, symbols, even a new national anthem.

Many others have voiced their support for the proposal, some quite vehemently too.

“We will rain down freedom and poisonous creatures on our enemies,” one Ameristralia supporter excitedly declared.

Another said: “The bastard children of the British Empire united at last to a world dominating superpower.”

That’s a personal favourite of mine, actually.

Some of the memes are pretty outstanding as well, most of which feature a kind of koala/eagle hybrid.

There’s also an excellent one featuring the Queen below. 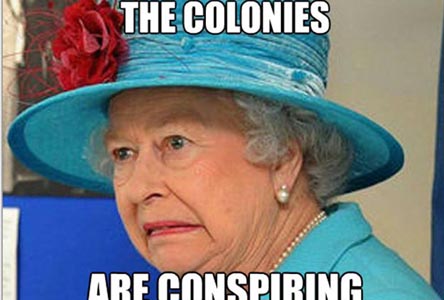 The prospect of an Ameristralia has quickly alarmed both Canadian and Kiwi Reddit users, prompting some to call for Canada and New Zealand to also unite, forming their very own (if slightly second rate) Pacific merger.

“Canada, here. Come on New Zealand! With our powers combined we can be but a nuisance to our numerically superior neighbours!” a Canadian reader posted.

New Canadeland would certainly have one thing over Ameristralia, it’d certainly be more progressive.

The prospect of a merged Ameristralia raises further uncomfortable questions; for example the next time Mel Gibson is really drunk and anti-Semitic, we here in Australia wouldn’t be able to just turn around and say that he’s American.

It would also suddenly become much easier to buy an assault rifle and give it as a gift to a five year old boy (or girl, we Ameristralian’s are many things, but we’re not sexist!) for his birthday.

Will I also have to start measuring distance in miles, fuel in gallons and replace all my S’s with Z’s? Quelle horreur!

And what about the humble ‘U’? Will I have to forever drop it from the end of all my words? Sydney Harbor just looks wrong.

All things being considered, I’d probably rather merge with any other country on Earth rather than America… But that’s just me.

Birth of a new day