The stage is a blur of bright colours, big make-up, stilettos and wigs as I arrive at Amsterdam’s Drag Queen Olympics. A huge crowd has already gathered at the Homomonument – a memorial commemorating all gay men and lesbians who have ever been persecuted – for this Gay Pride event, and the excitement is palpable. The music is loud and the crowd gets bigger still as the clock hands move steadily towards 7pm. Suddenly a roar goes up.

Miss Gimme Moore appears on stage and starts warming up the crowd, followed by an inspiring performance of Barcelona by Miss Didi Licious – her dress gradually inflating until the song reaches a crescendo and she falls over.  Meanwhile, at the back of the crowd, the Olympic torch is lit and Jennifer Hopelezz is carried over the heads of the crowd to the stage. The games are officially open. 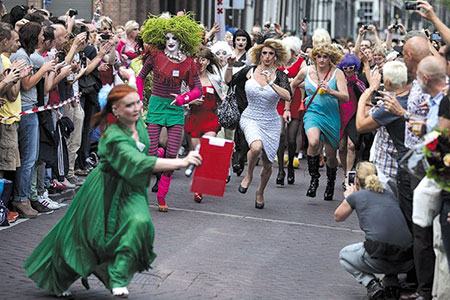 They’re off! The Stiletto Sprint

Amsterdam’s annual Drag Queen Olympics has been hosted and organised every year since 2004, by Jennifer Hopelezz – a hardworking mother with 55 children and counting, so her story goes. “Juggling a busy home life and my work commitments ain’t easy, but I love what I do,” she tells me.

Jennifer Hopelezz is the alter-ego of Richard Keldoulis, an Australian-born expat living in Amsterdam. She adds: “I always think it’s really funny to combine drag with sports or drag with politics.”

I’m here to watch 2012’s shenanigans, and the first event is the stiletto sprint, a ‘high speed’ race over about 100 metres. It sounds so simple, until the obligatory high heels, even for drag kings, are factored in – and some of the entrants are extremely competitive. 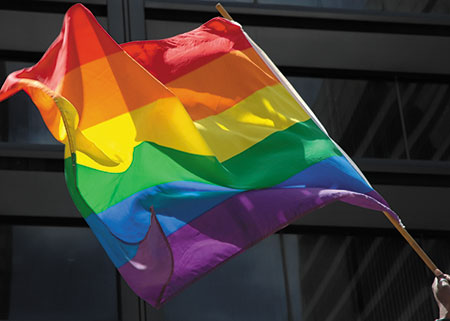 Eva Vragen looks like she has been practising hard by the way she takes off. It’s tense, and they really go for it. There is a first aider ready to assist if people fall over, but luckily none of the injuries are serious. There is a podium for the placegetters, first to third, who are awarded rosettes as reward for their achievements.

Contestant Miss Didi Licious says: “My favourite contest has to be the handbag throwing because you get to do a long catwalk on the stage, strutting your thing and throwing your handbag high up in the air and watching it descend into the crowd and listening to everyone scream.” 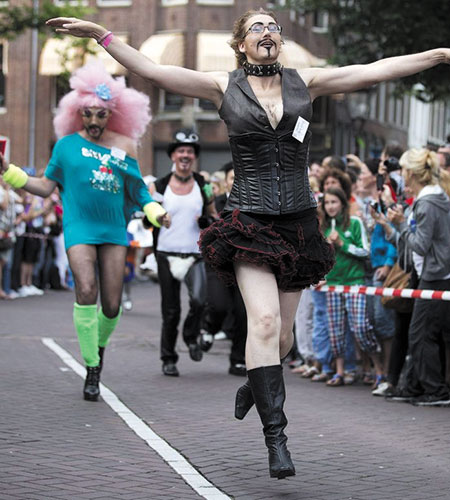 This is the next event, and one by one contestants hurl a handbag into the crowd as far as it will go. The methods by which the handbag is thrown varies from a hammer throw-style, spinning around in circles and letting it go, or just hurling it underarm. Some of the contestants even accidentally throw it backwards and one of the contestants manages to lob hers on the roof of the burger bar, at the back of the hordes, to the amusement of everyone on stage. 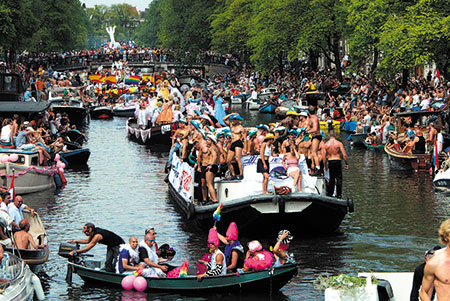 Bystander Ian Pierce says: “This is brilliant, first time I’ve been, but I’m definitely coming back next year. It’s so funny.”For the tug of war, two haphazard teams take their places on the stage with a rope. The whistle goes off, and the two teams start to pull to deafening cheers – the winning team comes dangerously close to falling off of the stage.

The best part about this event is that absolutely anyone can join in – it’s open to drag queens and kings alike and there is a dedicated beautician who will help to transform you into a dazzling drag beauty, should you wish to join in the fun. Fancy being part of 2013’s celebrations? Well it’s completely free to enter (if you need some Dutch courage, the contestants get free booze, which is awesome), just don’t forget your wigs and stilettos – even if you’re a drag king, you will need to wear heels. 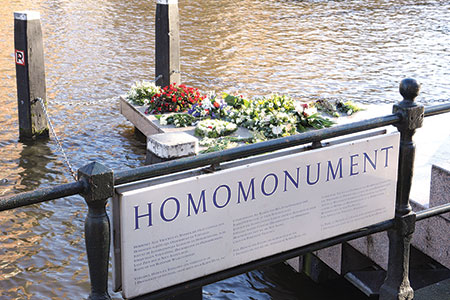 As for those who’d rather just spectate, there’s plenty more to see and do in the city during the same week, as the Drag Queen Olympics are part of the wider Amsterdam Gay Pride celebrations. These take place all over the city and include a boat parade, street parties and a Pride march.

One regular Pride participant I spoke to, David Markes, summed up the inclusive atmopshere: “I love the way the entire city seems to be behind the day.” Who could resist a party like that?

Drag Queen Olympics take place on August 2, starting at 7pm. To enter as a queen or king, arrive at 5pm  amsterdamgaypride.nl;  dragqueenolympics.nl

Getting there Fly from London Luton to Amsterdam from £65.98 return with easyJet. 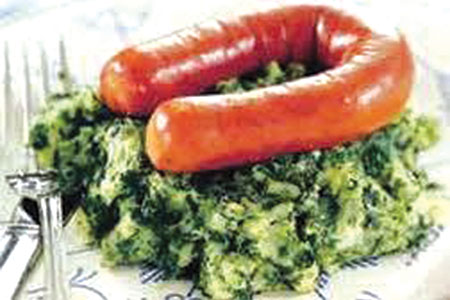 Budget: Kop Van Jut has a great atmosphere, with photos and memorabilia adorning the walls. The traditional Dutch grub is served in generous portions and the restaurant is always full, so call ahead to make a reservation. Mains from £12.(Leidsekruisstraat 24; tel. 002 0320 7722)

Midrange: The Dutch might not have a stellar reputation for service, but Rijsel is the exception to the rule. On top of great staff, the food here is excellent. You also have the option to go off-menu for more unusual fare, such as calves brains or dove. Mmm. Mains from £16.

Luxury: Elkaar does Dutch fine dining in a laid-back atmosphere – almost to the point of feeling as though you’re entering someone’s home. Take a seat outside in the hot summer months. Mains from £20.(Alexanderplatz 6 1018; tel. 002 0330 7559) 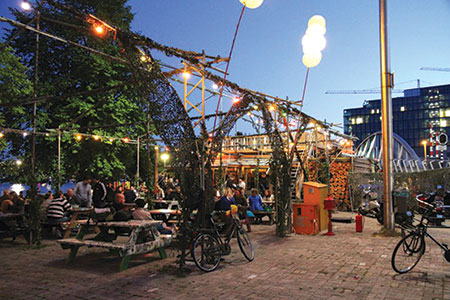 Budget: With a great atmosphere, and regular live music, Hannekes Boom (above) is one of the best bars in Amsterdam. When it’s sunny, sit on the terrace which looks out towards the Science Center NEMO. Pints from £2.

Midrange: Spacious Cafe de Jaren is great for drinks or dinner. There is a separate dining area for customers who wish to eat, so bar-goers – a hipster, mixed-age set – have the downstairs floor to themselves.  Wine from £3 a glass.

Luxury: With one of the best views over Amsterdam, SkyLounge is situated on the top floor of the Doubletree Hilton Hotel. During the daytime you get spectacular views, and the city looks pretty lit up at night, too. Cocktails from £10. 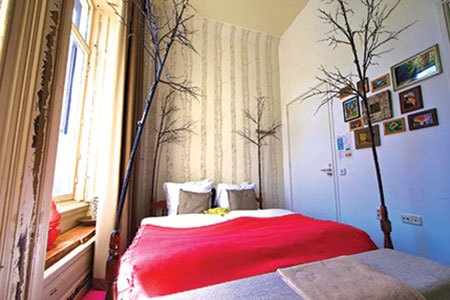 Budget: Formerly housing Amsterdam’s most famous brothel, chic boutique hostel Cocomama (above) is the place to be in Amsterdam. With chandeliers, high ceilings and a garden to chill out in, it’s the perfect base from which to explore the city. Doubles from £45pn.

Midrange: A short walk away from the bustling nightlife at the Rembrandtplein, The Hampshire Hotel has spacious bedrooms and free wifi. It’s quiet too, so is good for getting some well-needed shut-eye after a party. Doubles from £112pn.

Luxury: The Hilton Amsterdam is famous for hosting John Lennon and Yoko-Ono in 1969, when they staged their bed-in for peace. Go here for the added bonus of a health club, complete with sauna and whirlpool. Doubles from £250pn.

Passenger kicked off flight for sexist comments to female pilot