An unexpected journey: A trip to JRR Tolkien’s Middle Earth

Not so long ago, the Lord Of The Rings trilogy was an international reference point for New Zealand. Then, those loveable losers Bret and Jermaine from Flight Of The Conchords did their part for tourism to the Land Of The Long White Cloud. Soon, though, with the December 14 release of The Hobbit: An Unexpected Journey, Kiwiland becomes Middle Earth again. Bilbo, Gandalf et al will adventure around this beautiful nation and you, too, can follow in their footsteps. To make things easy, we’ve compiled the top spots featured in Peter Jackson’s upcoming three-part epic. We don’t have any dragons for you, but like the Hobbits, you’ll come across a wealth of treasure. Remember to share, though, Precious.

Fancy a drop of Sobering Thought Ale in the very spot where the Hobbits themselves hung out? Head to Matamata, at the foot of the Kaimai ranges, and visit Hobbiton, the actual set used in The Hobbit. As it’s situated on a farm, you’ll have the chance to feed lambs after you finished a tour of the set.

If you’re after something a little more exciting, the town has a gun club, where you can shoot clay pigeons with the locals; and the local golf club, members of which always welcome some new faces on the greens.

Ramp it up a notch with spot of gliding. Matamata is a world-renowned gliding spot, thanks to the up-drafts from the Kaimai Ranges create ideal conditions for gliding. There’s also a chance to strap on a parachute and leap out of a perfectly good plane, and when your feet are back on solid ground rest up in the mineral waters of the nearby Opal Hot Springs.

The Mangaotaki Valley, Denize Bluffs and nearby forests appear in The Hobbit as the Trollshaws setting and you’ll have plenty of fun around this rural New Zealand town.

Te Kuiti promotes itself as the sheep-shearing capital of the world. If you’re in the area around Easter, you can catch the annual NZ Shearing Champs and the Running Of The Sheep, New Zealand’s answer to Pamplona.

If you’re after something a bit less sheepish, unleash your inner subterranean explorer, 20km away at the popular Waitomo Caves. Here, you can abseil 100m into the earth, before tubing in the underground river or marvelling at the spectacular glow worms hanging from the cave ceilings above. This is an experience you’ll never get anywhere else.

The geothermal city of Rotorua is only a 90-minute drive for Waitomo. If you’ve got the time, it’s well worth a visit. Explore a Maori village; get involved in adventure activities, such as luging and zorbing, and then finish up with a soak in the city’s ubiquitous hot pools. 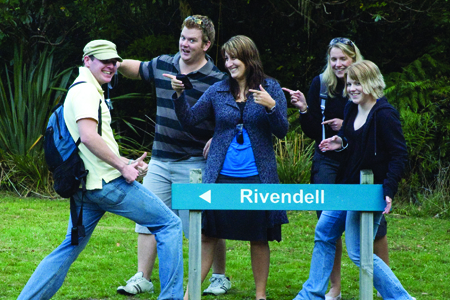 There’s three active volcanoes in the park, Tongariro, Ngauruhoe (aka Mt Doom) and Ruapehu. Ruapehu offers two ski-fields, Whakapapa and Turoa, open from late June to early November. Both cater to all levels of skill. All equipment can be hired on the mountain.

If you’re after more activity, hike the Tongariro Alpine Crossing, considered one of the world’s greatest day hikes. It’s challenging – taking you across rugged volcanic landscapes – but with incredible panoramic views of the beautiful surrounding countryside, well worth the effort.

Mountain bikers will love the area. Make sure you check out Fishers Track, 42 Traverse, Old Coach Road and the tempting Bridge to Nowhere.

White water rafting (exciting grade three rapids) can be enjoyed on the Tongariro River, but if you’re after something a bit more sedate, try fishing for some rainbow trout that are in abundance in the park’s rivers and streams.

This is it, Middle Earth fans – the biggie. Wellington was the main filming and production location for Lord Of The Rings and there was even discussion of creating a ’Wellywood’ sign on the City’s hillside (thankfully, sanity prevailed).

While you can’t visit the famous Weta Studios, the next big thing is Weta Cave in Miramar, Wellington. Here you’ll get an eye-opening insight into the imagination and creativity involved in creating films such as The Hobbit. You’ll be able to come face to face with some of the characters, props and displays and discover the artists who created them and brought them to life.

There’s a host of LOTR/ The Hobbit tours around town; these go in depth to the point of taking you to the actor’s favourite restaurants and drinking and shopping haunts.

Seaton, on Wellington’s South Coast is home to Peter Jackson – you can sometimes see him hanging out at the beach.
About town, Wellington has a thriving arts and culture scene. Head to Cuba Street for a slice of Bohemia, boutique shopping and some of the best coffee in town.

Wellington is home to New Zealand’s one-of-a-kind house of parliament, The Beehive. The country’s national museum, Te Papa, is also well worth a look.

Active travellers can make like the locals and in-line skate around Wellington’s beautiful waterfront, surf at Lyall Bay or take a trip up the coast to Adrenalin Forest and test themselves on the Tarzan swings, flying foxes and high ropes.

Pelorus Bridge near Nelson was used for the Forest River scenes in The Hobbit. Here you can explore a huge native forest, swim or kayak in the river, or picnic under the trees.

Nelson is recognised as one of New Zealand’s sunniest spots. The long hours of solar blessing have attracted a hive of creative people, with more than 350 working artists and craftspeople calling the city home. You’ll be able to mix and mingle with them at Nelson’s famous Saturday Flea Market – this is an opportunity to take home a unique piece of art to always remember the country by.

In keeping with the art theme, there’s the World of Wearable Art Museum, just 10 minutes from the city centre – or you can watch glassblowers get creative at Hoglund Art Glass, set within seven acres of tranquil gardens.

Get centred in downtown Nelson by standing at the central point of New Zealand. The locals will point you in the right direction.
Chances are you’ll be hungry for action, and you’ll be able to satiate those cravings in Nelson with activities including skydiving, rock climbing, 4WD biking and horse trekking. More intrepid travellers can charter and sail to the amazing Abel Tasman National Park for a spot of hiking.

Travel to the nearby Farewell Spit, and visit the internationally important bird sanctuary and wetland. There are also huge sand dunes – take a cardboard box and surf down them. 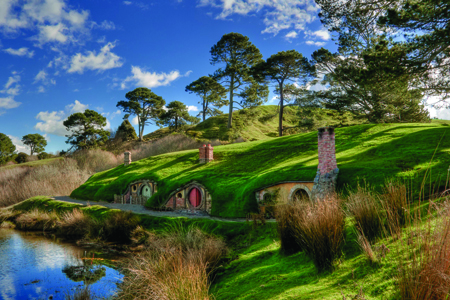 The Takaka Hills make an appearance in The Hobbit as the Westfarthing Countryside and Weatherhills.  The area’s sun-drenched Golden Bay also is also featured.

Beautiful Takaka’s a magnet for alternative lifestylers and, as such, there’s plenty of character around the town. Check out the local museum, movie theatre and a great choice of shops and cafés, plus plenty of local art.
If you’re feeling active, there’s the renowned Heaphy Track, a four- to-six-day tramp through the Kahurangi National Park, finishing up north of Karamea on the West Coast.

Get an idea of what water should really taste like as you lap up the purest water in the Southern Hemisphere (if not the entire planet), at Waikoropupu (Pupu) Springs. You’ll enjoy the peace and beauty as you wander through the bush on raised wooden tracks crossing the waters that flow from the spring.

Explore the Te Anaroa Caves in nearby Rockville, and check out the glow worms, stalactites and stalagmites. You can also head up Anatolia River, where you feed the eels at Bencarri Farm Park, before casting your line out and then and having your hot smoked at Anatoki Salmon.

Lake Pukaki near Twizel, was used as the Shores Of Laketown and The fields of Gondor in Return of the King were also shot in the area.

Take a one- or two-hour tour with Discovery Tours and get all the behind-the-scenes stories of the films. If you’re really keen, you can don a helmet and wield a replica LOTR sword, as you participate in a mock battle with other Hobbitphiles.

When you’re done, the peaks and trails of Mount Cook National Park are just up the road, or you can fish for salmon and trout in the local rivers, canals and lakes. If you’re after a more rare kind of exercise, head to the town’s frisbee golf course (frisbees are provided for those who haven’t packed their own). 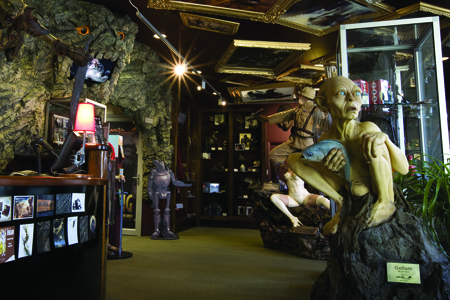 Queenstown’s spectacular mountain range, The Remarkables, was used as the Misty Mountains in Peter Jackson’s upcoming film, and spots all around the region made up the Wildlands. Nearby Wanaka appears as the Lonelands and the aptly named Paradise features as the Outskirts of Bree.

Queenstown is internationally known as the adventure capital of the world and as such, adrenaline junkies may find their pockets far lighter on the way out.

There’s never any shortage of people wanting to have a good time and Queenstown doesn’t disappoint. There are a huge number of bars and restaurants to cater to anyone wanting to prolong their day and swap tales of their hair-raising adventures.
When you do decide to chill out and take break, head to one of the many wineries in the Gibbston Valley to sample the region’s exquisite pinot noir. Then, reflect on being in one of the world’s most beautiful spots as you overlook the stunning Lake Wakatipu.

Dunedin was used a base for filming, and nearby Rock & Pillar Range and Middlemarch were used for The Hobbit’s Dale Hills.
While in Dunedin, hit the beaches of St Clair and St Kilda for surf; head up Baldwin Street, the world’s steepest street; and plan a trip out of town to the haunting rocky tors and tussock of Middlemarch, the starting point for the Otago Central Rail Trail.
Be sure to head along Dunedin’s Otago Peninsula to explore Larnach Castle and get close to nature at the penguin, albatross and seal colonies.

Dunedin’s a university town, so you’re sure to find a party somewhere. Head to legendary drinking hole, the Captain Cook Tavern and then walk up to the town centre, known as The Octagon, where there are bars aplenty at which to get amongst the locals.
For a change of pace, head 12kms to the seaside town of Port Chalmers, to check out galleries, eateries and second-hand bookshops