An earthquake measuring 6.5 on the Richter Scale hit Japan at 7:24am local time today, leading to a tsunami warning for the northeast of the country. Meanwhile, yet more shocking footage of the deadly earthquake and tsunami that hit Japan on March 11 has been posted on Youtube.

Monday’s earthquake was located 50 miles east of the Oshika peninsula in Miyagi prefecture.

The latest tremor brought new fears for a population still in shock.

CNN reported: “These are people who are still standing in the rubble of their homes. People are still looking for their mothers, their fathers and their children.

“You’re talking about people who have been incredibly traumatized.”

Today’s quake was thought to be the latest in a series of aftershocks, said Japan’s weather agency.

A 20 inch tsunami warning issued for the Pacific coastal region was later lifted without the horror of March 11 being revisited.

More amateur footage of the tsunami has emerged in a clip filmed in Kesennuma, in northeastern Japan.

The clip begins as a wall of water breaches the coastline sweeps away a parking lot of cars (above). A tsunami alarm sounds and a man’s voice is heard giving alerts.

In a matter of minutes, cars, ships and buildings are swept away by the powerful wave of water.

It was today announced that the death toll from Japan’s earthquake and tsunami has reached 10,804.

At least 2,776 people have been injured and 16,244 more remain missing, officials said.

Across the country, a massive clean-up and restoration project is underway.

At the Fukushima nuclear power plant radiation contamination continues to be a worry for the surrounding region.

Panic ensued on Saturday after Tokyo Electric Power Co (TEPCO), the operators of the Fukushima plant, erroneously reported that radiation levels in water in one of the reactors was 10 million times higher than normal.

The company have since admitted that this was a mistake and that radiation levels are actually 100,000 times higher.

At the nuclear plant, teams of workers are battling around the clock to stem radiation leaks inside four of its six reactors.

Pictures from the March 11 tsunami footage. 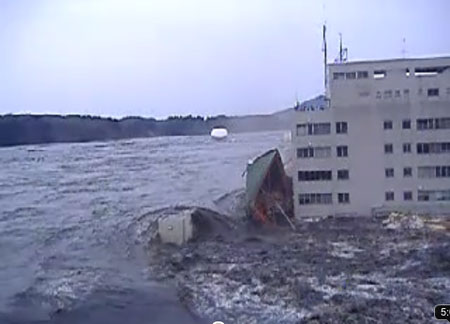 A ship crashes into the side of the hotel as the torrent of water washes away all in its path. 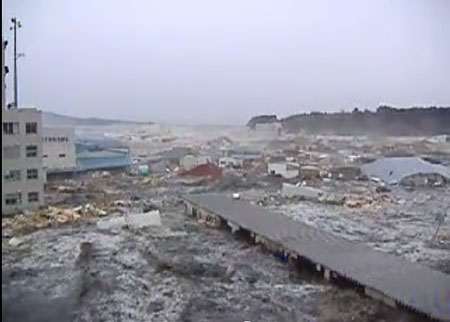 The tsunami turns buildings to rubble as the cameraman films. 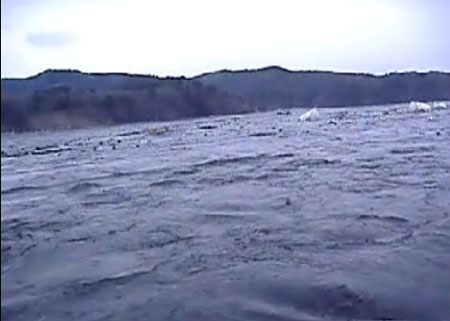 The tsunami leaves nothing in its wake.

Spice Girls ‘to tour Australia in 2014’ … including Posh!

Gifts only a Mother could love