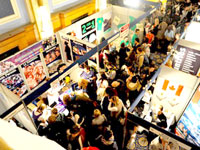 Any thoughts of the recession slowing down travellers were wiped aside last weekend at the TNT Travel Show.

More than 8000 people flocked to the show which was hosted by TNT Publishing at the New Connaught Rooms in central London. This represented a 20 per cent increase in traffic on last year’s show.

Some travel operators took well over £70,000 on the day, showing that Aussies, Kiwis and South Africans are bucking the recession.

This injection of much needed spending was welcome relief for independent travel brands.

On the Go’s Sales Manager Danniell Saunders said: “Tapping into the Australasian and South African independent travellers’ marketplace is incredibly important, especially in this current economic climate. They are consumers still eager to spend. We had more people interested in our trips and more bookings than ever before.”

According to Gillian Pearsall from Intrepid Travel “the show was a great success for us – we gave away almost 2000 brochures and, as usual, many people came prepared to book on the day, which was great. The TNT readers didn’t seem to be affected at all by the economic climate.”

“Sixty-one per cent of our readers list travel as the number one reason for coming to the UK, and spend an average of £2,000 a year on travel, with a third travelling every 2 months.

“This audience is building and supporting the UK economy through their added spending which is providing a welcome boost to travel operators and holiday companies.”

Health and Beauty in the Big City – Tips and Tricks