The Bulletin of the Atomic Scientists shifted its Doomsday Clock from six minutes to five minutes before midnight, warning that humanity is on the brink of disaster.

The clock is a universally recognized gauge of the world’s vulnerability to nuclear weapons, climate change and emerging technologies. It last moved in 2010 when the hands were set back to six minutes before midnight. Frighteningly, the clock has once again moved forwards. 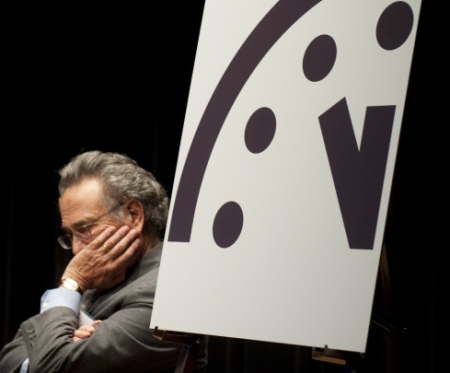 Robert Socolow, a professor at Princetown University, contemplates the apocalypse alongside the Doomsday Clock

Explaining the decision to symbolically place humankind five minutes from annihilation, the Bulletin of the Atomic Scientists pointed to “inadequate progress on nuclear weapons reduction and proliferation, and continuing inaction on climate change.”

The most significant contributing factors to the decision were the disaster at the Fukushima nuclear plant in Japan and the possibility of nuclear weapons in Iran. 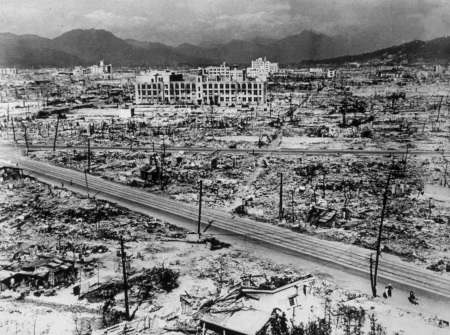 Hiroshima, Japan, lies devastated after an atom bomb was dropped by the U.S in 1945, during the second world war

Jayantha Dhanapala, former United Nations under-secretary-general for Disarmament Affairs, said that, “failure to act on the Comprehensive Test Ban Treaty by leaders in the United States, China, Iran, India, Pakistan, Egypt, Israel, and North Korea on a treaty to cut off production of nuclear weapons material continues to leave the world at risk. The world still has over 19,000 nuclear weapons, enough power to destroy the world’s inhabitants several times over.”

The only light on the horizon, according to the Bulletin of Atomic Scientists, is the growing pro-democracy movements across the globe.

“The Science and Security Board is heartened by the Arab Spring, the Occupy movements, political protests in Russia, and by the actions of ordinary citizens in Japan,” said executive director Kennette Benedict. 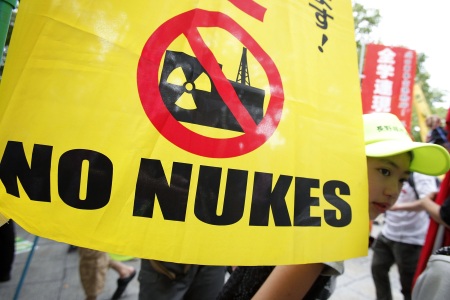 People take part in an anti-nuclear power protest on the 66th anniversary of the Hiroshima atomic bombing on August 6, 2011

The Doomsday Clock was closest to midnight in 1953, when the hands were set at two minutes before 12 after the U.S. developed the hydrogen bomb.

The furthest away it has been is 17 minutes, in 1991, with the signing of the Strategic Arms Reduction Treaty between Russia and the U.S.

Things to do in Brisbane

How BP oil spill has disappeared from Gulf

Total eclipse of the sky: darkness falls on Queensland