Ashes 2013: England force Aussies to make something happen as they park the bus on day 3

Parking the bus is a fair tactic when you’re 3-0 up in a series but after talking up their desire to make it 4-0, all it took was a good first two days’ batting from Australia to turn that around.

Still, England don’t seem to care how many runs they are, just that they’ve lost only four wickets at stumps on day three.

This means Australia need to roll them asap in the morning, set a competitive total and hope – ambitiously if the weather man is to be believed – the rain stays away. 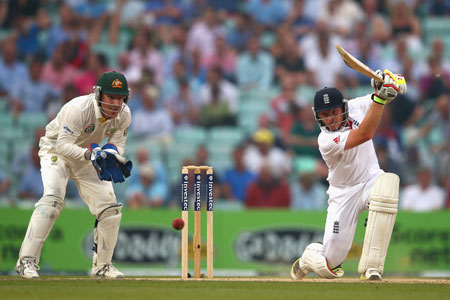 With a flat deck and the ball doing little to nothing for the Aussie bowlers, all six of them, with Shane Watson notably absent as he was relieved of his other duty as an all-rounder after his 176.

The most excitement of the session came with a spat between Kevin Pietersen and Michael Clarke, which continued on from lunch and into tea with the umpires deciding to step in like school teachers. 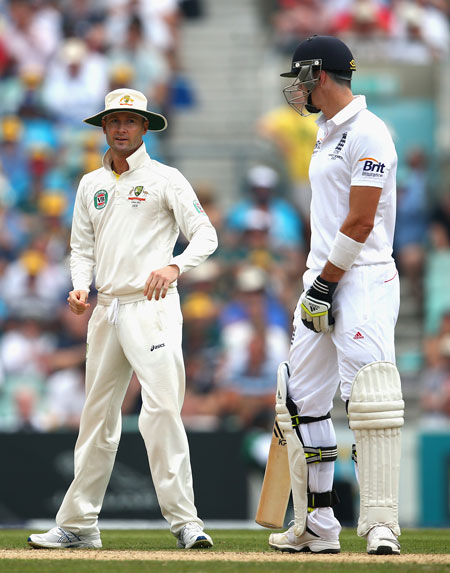 Of course they’ll say it’s nothing.

Pietersen’s innings was totally out of character, his second slowest Test 50 ever in 134 balls, brought up with a ropey bottom edge from a false pull shot.

He was gone on that score after standing his ground for a possible bump ball that floated gently to Watson in the cordon.

The video umpire needed one look to see in bounced and then hit the bat, and KP was gone – if only all reviews were so simple. 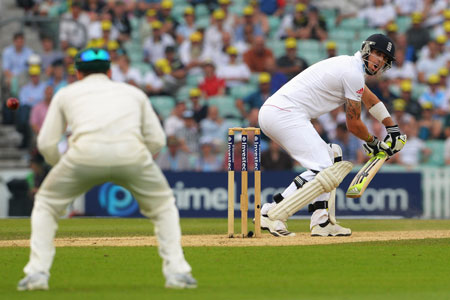 Pietersen had earlier survived an LBW shout the Australian’s may have made just to inject some exciting into proceedings, but it was shown to hit him outside the line.

Australia now have to rely on the umpires for the remainder of the innings.

Woakes didn’t get the memo, hitting his first ball faced in Tests through covers for four, but he was soon to slip into the groove as he and Bell faced seven out of eight maidens at one stage. 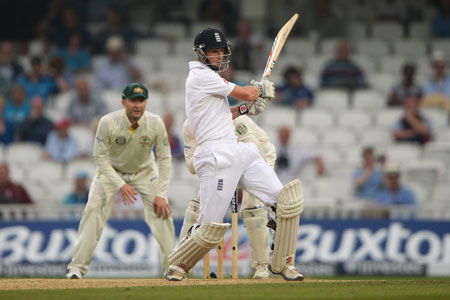 On the positive side for the Aussies, their economy rates have been well served, with James Faulkner the most expensive going for a perfectly acceptable 2.42 an over as he chases his first Test wicket.

Nathan Lyon, who copped stick from Bell and KP earlier in the series, has bolwed eight maidens and conceded just 1.6 an over and has Joe Root’s scalp also.

Ryan Harris, who had Alastair Cook caught behind, has the most maidens with nine, while Mitchell Starc has been wayward but still only gone for 2.3 an over and taken the other two wickets.

Love on the back street of Valencia

London diary: William S Burroughs exhibition All Out of Time And Into Space at October Gallery