Ashes 2013: England take the piss after controversial draw by getting drunk and allegedly urinating on the Oval pitch

Twitter got a work out after the umpires stopped England short of an impressive final day run chase.

Wicketkeeper Matt Prior tweeted an image of Ian Bell, Jonny Bairstow and others, while the Mirror reports Kevin Pietersen, Stuart Broad and Jimmy Anderson apparently relieved themselves while being cheered on by teammates. 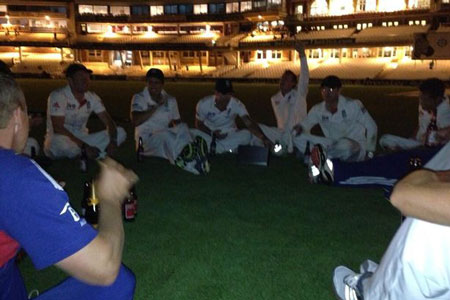 “Nobody wants to put the mockers on any England celebration but that will be viewed by many people and by us as an ­irresponsible thing to have done,” Surrey cricket ceo Richard Gould said.

“Knockabout stuff is one thing. But it is a very silly thing to do on a pitch at the Oval where there is so much heritage and history.

“I’ve spoken to the ECB let them know what we are aware of. We will let them investigate further and see what they come back to us with.”

The on-field party kicked off after fans had left the ground but in full view of the press box.

Respected Herald Sun cricket writer Malcolm Conn said: “A number of players including Stuart Broad, Kevin Pietersen and Jimmy Anderson took it in turns urinating on the pitch to the cheers of their teammates.

“This could be clearly seen from the outside overflow areas of the press box.”

England and Australian fans slammed the behaviour, with the most extreme calling them yobs, comparing them to football players and calling for their sacking.

Looks like England are already starting to prepare wickets for the arrival of India next summer. Watering the Oval last night after play!!!!

Not surprisingly, Ian Botham, who’s said England can win 5-0 in Oz, defended them:

“I see some people have a problem with players ­celebrating a huge triumph for the country, get over it. Did they cause any damage?

“They were just celebrating and letting of a bit of steam, for goodness sake, they’ve earned it. And in any case the pitch was very dry.”

In other ‘hilarious’ hijinks, Broad tweeted a pic of Prior and Cook hitchhiking outside the ground, still in their whites. 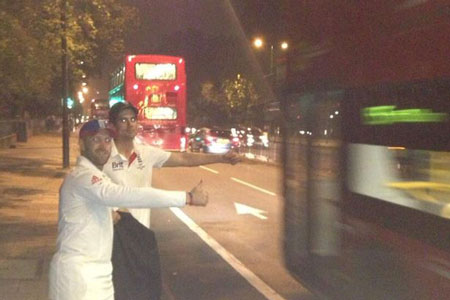 While Anderson posted an image of Graeme Swann wearing a rather fetching swan hat. 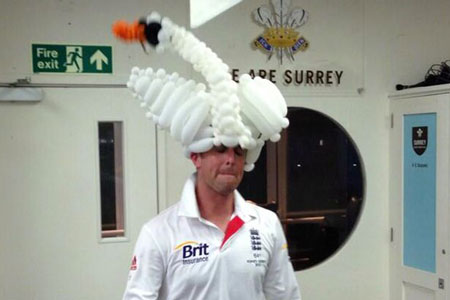 Kevin Pietersen was feeling a little worse for wear the next day.