But it will make little difference to the result of this Test match, which will be decided by a declaration or monumental collapse from England, their bowlers taking 10 wickets or the Australians finding something within that convinces them to bat through two days or chase a mammoth total.

As the tea interval approached England appeared to start accelerating, or they were getting more loose balls, keen to put as many runs on the board that they could through Ian Bell and the innings’ anchor Joe Root.

Early in the second session England’s nightwatchman Tim Bresnan finally fell on 38, guiding a James Pattinson bouncer into the safe hands of Chris Rogers in front of the square leg umpire.

The ball before he’d done his best to get run out to Rogers, whose throw hit a pair of sunglasses just next to the base of the stumps.

The long-awaited wicket pulled his partnership with Joe Root just short of the 100 milestone, on 99, but his job had been more than done.

Root remained in no hurry, occupying the crease and working his way toward his first century for the series. He finished the session unbeaten on 97 from a whopping 237 balls.

But it will be the third umpire’s intervention that will again be a major talking point after Steven Smith claimed a low catch off the edge of Bell. 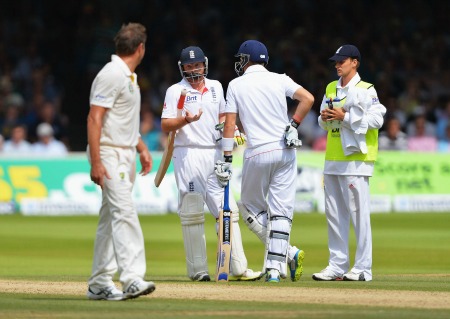 TV and radio commentators agreed it was out, but the man upstairs gave the first innings centurian a reprieve and Harris missed out on a rightful wicket.

England legend David Gower on Sky Sports said “there is no way that is not out” while his co-commentator Shane Warne was 100 per cent with him, saying, “They got it wrong”.

Bell was on 3 at the time and added a few boundaries straight afterward to rub salt into the Aussies’ already deep wound after their five bowlers battled the first two sessions with little joy.

England’s class and composure has shown today and it’ll be interesting to see if the Australians can recover.

Conservative captain Cook could shock everyone and send the Australians in tonight, but more likely he’ll keep going into tomorrow to set a massive total and still give his bowlers plenty of time to bowl the Australians out – after all, they didn’t last 54 overs in the first innings.