The Aussie paceman knocked over Ian Bell with a rip-snorter that kept low on the England centurion finding, in turn, an inside edge and middle and leg stumps, send the latter cartwheeling out of the ground.

Harris unearthed the off-stump of Matt Prior courtesy of a deflection off the England keeper’s elbow.

The wicket sealed the Aussie’s five-for and put him on a hat-trick, though Stuart Broad was able to spoil the party with a solid fend to a stock ball outside off-stump. 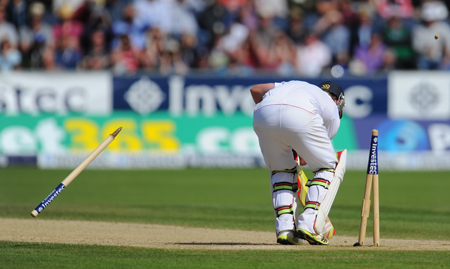 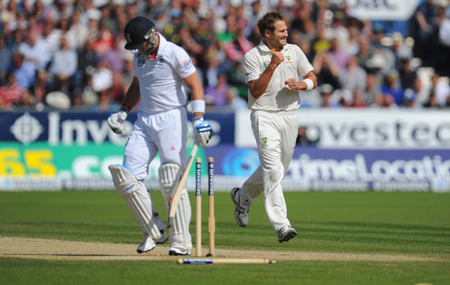 Broad’s 13-run cameo came to an end after he gloved one to Steve Smith at gully off a short ball from Harris. 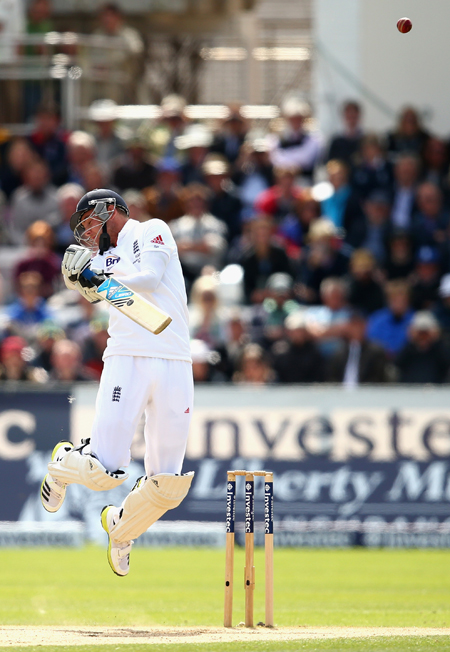 Tim Bresnan rode his luck to notch as swashbuckling 45 before catching a leading edge to Harris which he caught comfortably, giving him career best figures of 7-117.

Graeme Swann played with superb freedom to notch a much-needed 30 not-out, though he was dropped in uncoordinated glory by Steve Smith at long-on.

Jimmy Anderson was last to fall to Nathan Lyon, edging on that pitched on middle and leg and turned past off-stump.

As the players went into lunch the rain which had been a trickling for sometime started to come down properly and the covers went on.