Australia will need to write this match off mentally is they are to salavage anything from the series.

In the final session of the day the Aussie’s Ashes hero Ashton Agar was first to fall. The spinner looked to have edged one from Tim Bresnan but was given not out by umpire Marais Erasmus. England reviewed the decision and despite the hotspot showing nothing, the third umpire felt the evidence provided by the stump mic was sufficient to overturn the decision.

Snicko would later suggest there was a noise but it was hard to say definitively that it came from the bat, the ball having just passed the edge when the noise was detected.

Next to go was Brad Haddin, the wicket keeper misjudged the line of one from Graeme Swann and he was caught in front offering no shot to a ball that straightened on him. It looked absolutely plumb but Hawk Eye showed it was missing leg by a millimetre.

It brought to the crease one of Australia’s stand-out performers with the willow, James Pattinson to partner Peter Siddle.

Jimmy Anderson, brought back into the attack, did for Siddle with a ripsnorting inswinger which knocked back the Victorian’s off stump.

Pattinson, showing the touch which has been in evidence in the previous tests, looked assured at the crease, notching a well-constructed 35. 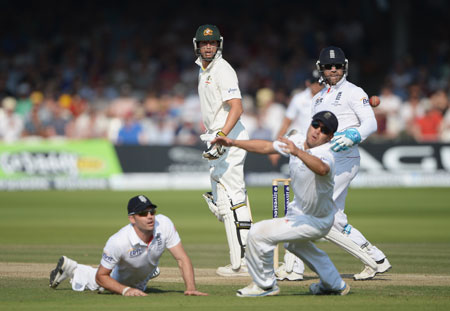 Ryan Harris, not known for his talent with the willow, didn’t look like a number 11 punching Anderson through point.

Searching for his 200th wicket Stuart Broad thought he trapped Harris in front but Dharmasena was unmoved and Hawk Eye suggested it was just sliding down leg.

England took the extra half hour on offer in a bid to save us all tomorrow’s bus fare.

But Australia’s 10th wicket pairing, as it has looked throughout the series, looked more like its fourth wicket as Pattinson and Harris played beautifully, rotating the strike and leaving where necessary.

Cook, showing his sentimental side for the second time in the match, slung the new ball to Broad in a bid to let his seamer get his 200 wickets. 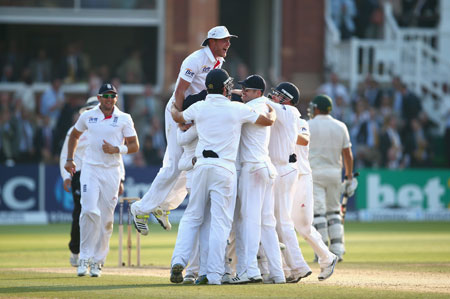 With time and overs ebbing away Swann was brought into the attack and struck in the last over of the day, defeating Pattinson trapping him lbw on his back leg.

It was a crushing defeat for Australia’s whose bowlers looked penetrative at time, but once again were let down by their top order.

Australia will be looking to take a big win during their tour game this week.

How to not die while travelling: As mortality rates for Aussies abroad soar, we look at how to travel safe

cruising on the harbour