Ashes 2013: The Bluffer’s Guide to The Ashes

If you ever find yourself in a position where you need to pretend to know something about professional cricket, indeed about any form of cricket, you will first need to be aware that the English, not being by nature a religious people, invented the game to give them some idea of Eternity. Having absorbed that self evident truth you must next demonstrate a familiarity with the most famous and keenly fought cricketing competition of them all.

Is it the Barmy Army versus the Marylebone Cricket Club (MCC)?

No, that’s another ongoing battle with no end in sight. It is in fact the ‘Ashes’, a ‘Test’ series that takes place every two years between England and Australia, alternately in each country. Most followers of English and Australian cricket say that it should be played every year, because it is the only one they really care about.

Why is it called the Ashes?

That’s easy. In August 1882, in a match that lasted only two days (lightning fast by Test cricket standards), Australia beat England for the first time in England. One spectator dropped dead and another bit chunks out of his umbrella handle (Augusts were soaking wet, too, 100 years ago). The next day, The Sporting Times published its famous mock obituary:

In affectionate Remembrance of English Cricket which died at the Oval on 29th August, 1882. Deeply lamented by a large circle of sorrowing friends and acquaintances. RIP. NB The body will be cremated and the ashes taken to Australia. 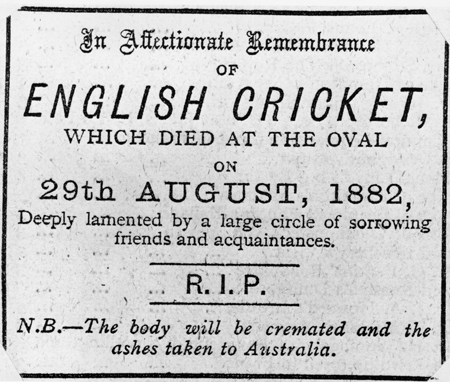 Where are the Ashes now?

The following winter England beat Australia in Australia, and some Melbourne ladies burnt a ‘bail’ (the wooden bit that sits on top of the stumps), sealed the ashes in an urn and inscribed it with a rather sweet little poem that included the couplet: ‘The welkin will ring loud/The great crowd will feel proud.’ Australians have always been better at cricket than poetry. The ladies presented the urn to the English captain, the Honourable Ivo Bligh, and one of them subsequently married him. When the Hon Ivo died, he bequeathed the Ashes to the MCC. Since 1927 they have remained at Lord’s (the self-appointed London HQ of international cricket), even though England did not win them once between 1934 and1953. There is a replica urn however which the MCC generously allows the Australians to take back downunder whenever they win an Ashes series.

Which team has got the best Ashes match record?

The Australians are ahead by some distance. Between 1882 and the final test of the 2010 -11 series, Australia has won 123 matches, England has won 100, and 87 have been drawn. Things are slightly more even when you look at the overall series results (as opposed to individual test matches). There have been 66 series; Australia has won 31, lost 30, and drawn 5; England has won 30, lost 31, and drawn 5. England are the current Ashes holders, having won the last two series. 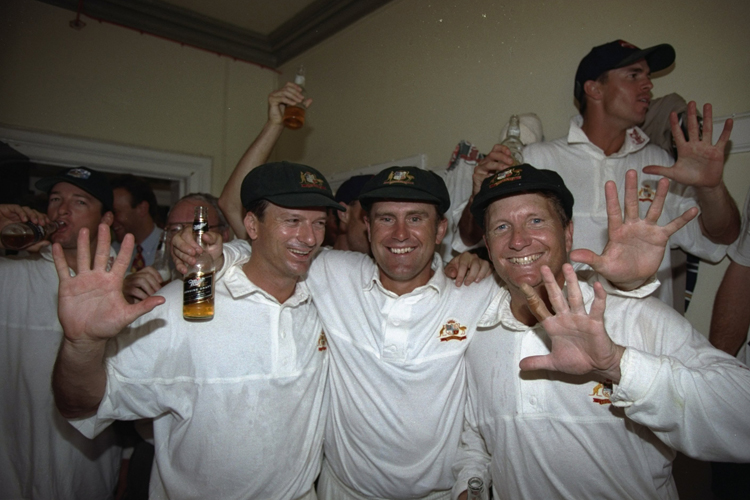 Who’s the favourite this time round?

In recent years England has been in the ascendancy, and is expected to win the forthcoming series with ease. Naturally, such expectations spell trouble. You might say knowledgably that in cricket, as in most areas of life, complacency is the worst form of preparation.

The last time England was so strongly fancied was in 1989 when they lost the Ashes 4-0. Don’t Say: ‘Australian cricket is in terminal decline, along with its swimming, track and field sports, rugby, and just about every other sport you can think of – apart from Australian Rules Football (and that’s because no one else plays it).’ Do Say: ‘Never underestimate an Aussie cricket team with its back against the wall.’ 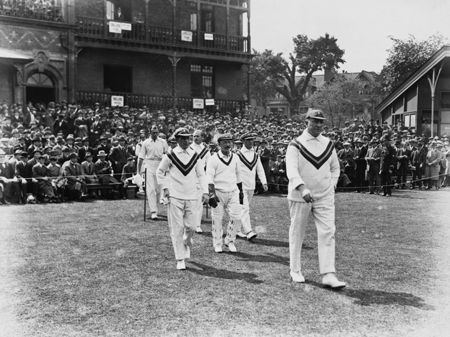 1/ Mike Brearley captained England in 18 Ashes matches between 1977 and 1981, the most by an Englishman. He is now a psychoanalyst.

2/ Allan Border holds the record for being the longest serving Australian captain in Ashes history – 29 times. He used to be a clerk in the library of a mining company.

3/ Aussie spin bowler Shane Warne bowled star England batsman Mike Gatting with the first ball of his Ashes debut in England. Nobody has come close to his record of 195 Ashes wickets. He is now Liz Hurley’s partner.

4/ The Australians invented the noble art of sledging – barracking English batsmen to put them off their game. It didn’t always work to their advantage. In 2001, Mark Waugh, brother of former Australian captain Steve Waugh, said to England batsman James Ormond: “Mate, what are you doing out here? There’s no way you’re good enough to play for England.” Ormond replied: “Maybe not, but at least I’m the best player in my family.”

Adapted from The Bluffer’s Guide to Cricket by James Trollope, available in all good bookshops and at Bluffers.com

Jumping in the Greek Islands!