And, even for a period after the Olympics, Hooker looked invincible, winning at the 2009 World Championships and Commonwealth before being struck down by a dreaded case of the yips.

His horror stretch started with a knee injury and reached its nadir when fear set in and he simply couldn’t jump.

Hooker, 30, hopes the toughest two years of his sporting life have a rewarding conclusion in London. But even he accepts that reward might not be an Olympic medal, let alone another gold.

The mental demons are clearing and the confidence is returning, but the defending champion seems resigned to just enjoying the experience of another Olympics.

“The last two years has been the toughest two years of my life in terms of my sport,” Hooker says. “That’s why I’m looking forward to London, that’s the outcome of all the effort and challenges I’ve had.

“I’m looking forward to enjoying the whole experience of going there because it’s going to be a big reward for what has really been a hard slog.”

That slog started with a knee injury in 2010 which kept him out of competition for six months and hit a low when he ran through his three attempts at 5.50 metres at the 2011 World Championships.

Australia’s athletics team captain hadn’t cleared a height in major competition for over a year and when he finally did, it was a lowly 5.00m off a short run up in Adelaide in January this year. 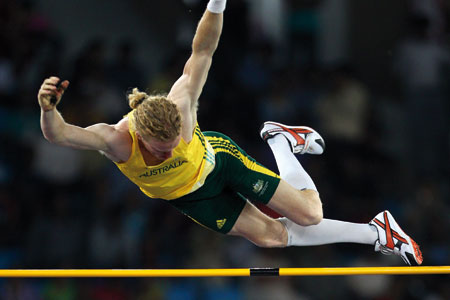 So, the man whose 2009 leap of 6.06m is the second highest in history pulled out of the Australian domestic season.

After taking success for granted for so long, Hooker’s confidence was so shot he retreated to a specially prepared indoor training facility in an old rail shed in Perth to start again.

Hooker insists he trained harder in the two months at that facility than at any other time in his career. He was buoyant when the work paid off; he cleared the Olympic qualifying height of 5.72m at a special event there in May.

“I haven’t stepped on the runway and felt like I owned it like I did tonight for two years,” he said at the time.

With renewed confidence and a secure berth to London he immediately headed for Europe, where the progress has stalled dramatically.

Although Hooker says he’s training well, he hasn’t cleared anything higher than 5.42m in international competition this season, while his rivals are jumping beyond 5.90m.

A month out from the Olympics, he says the thought of winning a medal is not a reality. 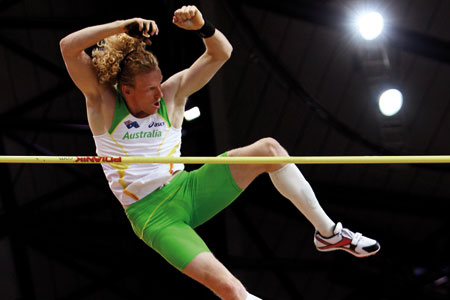 Indeed, Hooker’s showing at the London Diamond League meeting two weekends ago tells a tale. For years ago, he cleared 5.97m and, of course, went on to win a gold medal in Beijing.

This year, he failed to clear a height, running through on two of his three attempts.

“It’s been hard, it’s been really hard,” he says. “Every day I turn up to training is a challenge.”

But, as tough as he admits it’s been both physically and mentally, he’s come a long way from feeling “lost on the runway” and is close to the mindset he had when he won Olympic, world and Commonwealth titles between 2008 and 2010.

“I feel like when I’m standing at the end of the runway I’ve got a lot more idea of what’s ahead of me,” he says. “I almost feel like I’m back thinking about similar things.

“And that’s the beginning. Getting that process right in my mind and getting the key messages I want in my head established and consistent.

It’s probably more what happens after that, I’m building consistency but there can be slight variations from one jump to another. 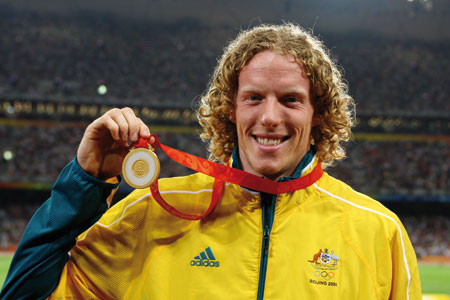 “Things are almost there, but at a slightly lower level. I’ve got to work on the consistency to get that level higher and higher.

“It’s all about ticking off one session at a time. If I think too much about the Games themselves, that could be a bit overwhelming in terms of the amount that’s got to get done between now and then.”

At least Hooker has fought to ensure he hasn’t gone down that path and to qualify for the Olympics is an achievement itself after the depths to which he’d plumbed.

But now he needs to find 50 extra centimetres if he’s to be any chance of contending for a medal. He’s not fazed watching Frenchman Renaud Lavillenie clear 5.97m and German Bjorn Otto jump 5.92m at the European championships a few weeks ago. In fact, he’s gracious.

“One of the great pole vault comps of all-time today in Helsinki. Congrats to Renaud and Bjorn! Amazing to watch!!!,” he tweeted while watching his rivals gearing up for London.

“Hooker’s focusing solely on himself as he builds toward using bigger poles, working on being more relaxed in his run up and easing his grip.

“The competition is the litmus test. Training’s going fine, what I want is a couple of better results in competition,” he says. “The answer is going to come as I move along the next month and as I go through these competitions.”

The ultimate answer will come on August 8 when Hooker lines up for the qualifying round at the Olympic Stadium, no longer invincible, but, in the tradition of all great Australians faced with adversity, not giving up either.

“I’m not giving up on it,” he says. “I’m going to go out and fight the whole time. I am going to continue to put in the effort. It’s just a matter of keep ticking it over, staying optimistic and anything can happen.” 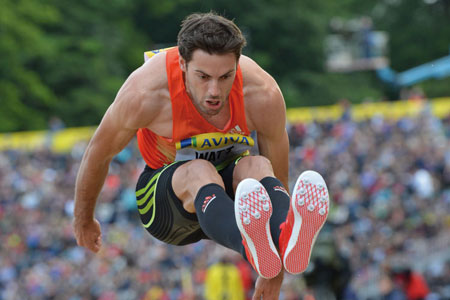 On the bright side: Not such a long shot

If Steve Hooker can best be regarded as a dark horse in the pole vault, Australians can take consolation from the sparkling form of long jumper Mitchell Watt (above), who wasn’t even on the scene four years ago.

Watt was a freakishly talented schoolboy athlete, but lost interest in track and field during his teens, instead turning his hand to Australian rules and rugby union.

Eventually, the 24-year-old was coaxed back to track and field, and travelled to the 2009 World Championships, where, at his first major international competition, he came home with a bronze medal.

Two years later, at the World Championships in Berlin, he claimed the silver medal and now heads to London as the man to beat in the long jump.

At the Diamond League meeting two weekends ago, Watt produced a season’s best of 8.28m to claim victory and remain undefeated in 2012.

London 2012: Olympic dream of double amputee Oscar Pistorius is over