Working it: meet the people on the ground making the Games happen

The spotlight of the Games is firmly on the athletes – and rightly so.

But while you’re watching Usain Bolt race for glory, spare a thought for the 10,000 people who will be descending on London as of Thursday, working to deliver the Olympics and Paralympics – no doubt in the rain.

For those involved in serving, sweeping, volunteering, ticketing, catering, it is the opportunity to be part of an event of a lifetime.

Aside from the G4S security staff blunder which resulted in 3500 Army personnel being drafted in, everything seems to have gone to plan (we’ll find out if not this week).

Here, TNT locates the workers on the ground – the people making the Games happen – to find out how they made the grade.

But he was called back for a second audition, then offered a place in Danny Boyle’s top-secret production.

Baros, from Santa Fe New Mexico, says: “Without giving too much away, for the past three months I have attended dozens of rehearsals – over 100 hours of my free time to perfect the scene I have been chosen to do.

“I think this will definitely look good on my CV – it’s something I will brag about for the rest of my life. And, I’ve already been asked to be part of the Paralympic opening ceremony as well, as an athletics marshall.” 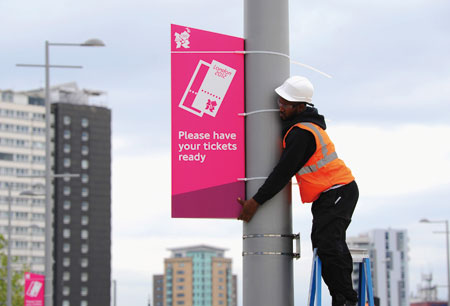 After leaving uni two years ago with little idea about what he wanted to do, Hudson, 24, joined a BT graduate scheme in its online consumer department. He was then accepted on a secondment at London 2012.

“I’m working at Horse Guards Parade and The Mall where the beach volleyball and road events take place,” Hudson, who lives in Chalk Farm, says.

“We’re putting in all the comms that will carry all the TV, radio and internet coverage. My role involves providing management support for the team and venue managers, and it can be very time pressured. In the run up to the Games there is very little margin for deadlines to slip as the events have to start on July 28.

“With so many important customers and suppliers on venue that can be tricky.

“From a career perspective, having worked at the Games will be a great addition to my CV, but it’s the experience and the skills I have learnt which I’ll really take away from my Olympic involvement.” 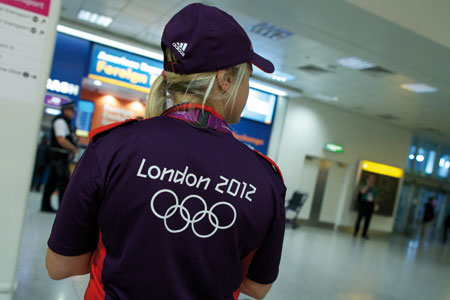 Brett, 32, from Clapham, looks after all the shops and services in the Olympic Village – making sure the athletes have everything at their disposal. She’s also behind booking the entertainment.

“I started out in the live events side of the music industry. My degree is in biological sciences, but I was on the committee that helped to organise parties and balls at university.

“The main pressure of my job is the very fixed deadline. We want to host a great event – and I’m confident we’ll deliver.

“I can’t wait for the opening and closing ceremonies – they’re going to be amazing.”

Pope is a former professional sportsman who trained as a broadcaster and will be commentating for the Olympic Broadcasting Services for 122 countries worldwide.

“It’s going to be high pressure, but I’m looking forward to all of it –  it will be like Christmas Day for three weeks!

“I hope to be a part of inspiring people around the world. People often do not remember what you say, but, rather, how you make them feel. My desire is to make the excitement, interest and global connectivity relevant to everyone!”

falconer: Jason Keddie’s job involved flying birds of prey around the London 2012 Aquatics Centre when it was under construction – to stop pigeons from nesting. “We train and work together every day,” he says of the birds.

Plant designer: Yes, someone is in charge of choosing the plants and designing the 2012 gardens – and that person is Sarah Price.

“This is going to deliver parks and gardens that people will be really impressed with,” she says. Check out her work when the London 2012 Gardens and Great British Garden open to the public.

Best of the Web

Riding the Overland in Africa