The World Heritage-listed Great Barrier Reef (GBR) is the world’s biggest single living structure – it can be seen from outer space (we asked that Armstrong chap).

Most divers and snorkellers will hit the Reef from Cairns, Port Douglas and/or the Whitsundays, though Cape Tribulation is another option.

The Outer Reef is generally visited by “liveaboard” boats rather than day trips, though you can visit the shallow Inner Reef, or do shore dives, on day trips.

The GBR is worth more than one visit, because every part is different.

Australia’s most famous wreck dive, the SS Yongala, lies near Townsville. Thanks to the currents it’s populated by oversized reef species, including sharks, turtles and groupers as large as small cars.

More spectacular underwater spots can be found in the Bundaberg area. The town home to the largest turtle hatchery in the southern hemisphere.

Fancy sharing the proverbial bathwater with 30 sharks? A cage? Pah! They’re for wimps. Okay, they’re grey nurse sharks, who want to eat you as much as we want to eat concrete.

If you have never seen a grey nurse shark, strap on a tank at Fish Rock Cave, South West Rocks (mid-way between Sydney and Brisbane) where you can also meet and greet with humpack whales in winter.

The harmless sharks can also be dived with atCoffs Harbour and down at Maroubra, Sydney.

Dolphin sightings are common at Byron Bay, as well as whale sightings (May-Oct).
Jervis Bay is another good option, plus Montague Island, off Narooma, offers the chance of diving with fur seals (Sep-Nov).

Victoria isn’t as famous for its diving, but it’s no shrinking violet. Port Phillip Bay is home to over 60 shipwrecks, where soft corals and seahorses thrive. The Great Ocean Road meanwhile boasts some good dive sites, such as Port Campbell, home of the popular Loch Ard wreck. The Warrnambool is great for shore diving.

The Gippsland coastline is an equally good spot with underwater reefs and rock platforms extending 17km.

Wreck dives also abound, with ex-HMAS Hobart (Fleurieu Peninsula,) being the most popular. But SA’s star players are the great white sharks, with two cage dive operators in Port Lincoln. 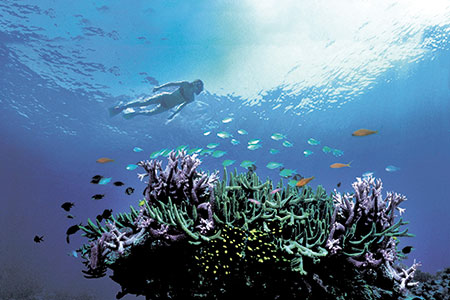 During the months of April to July, divers and snorkellers get the opportunity to swim with whale sharks, the world’s largest fish, plus graceful manta rays (May to Nov); and throngs of humpback whales (June to September).

Spanning a distance of 260km along the coastline, and most easily accessible from Exmouth, Ningaloo is considered the longest fringing reef in the world. Esperance and Albany, in the south, have memorable spots, too.

Often over-looked, Tassie has some of the world’s best temperate diving; from the giant kelp forests and rugged coastlines.

Diving’s poor relation? Tell that to a Territorian. There are many offshore islands within easy reach of Darwin, plus Gove Peninsula is well worth snorkelling up for.

Typically, a PADI Open Water Diver course takes anywhere from three to five days and costs upwards of $347. If you haven’t yet tried the gloriously strange experience, how will you know if it’s going to be money well spent? Simple. Some operators will offer an ‘introductory dive’ where they’ll carefully guide you through the ropes. You don’t need to be a strong swimmer (as long as you can manage 200 meters), to strap on a tank. However, asthma suffers will usually need a doctor’s certificate to dive.

Underwater ironing
Pioneered by wacky Germans, this sport involves taking an ironing board and iron to the bottom of the ocean, then taking photos to prove you did it.

Underwater hockey
Also called ‘Octopush’, two teams compete to manoeuvre the puck across the bottom of a swimming pool and into goals with a stick.