Floods in Australia’s Rockhampton could worsen as torrential rain brings the threat of flash-flooding, but despite this some residents have refused to move from their homes, angering Rockhampton’s mayor.

Queensland, in the north-east of Australia has been bit by floods described as “biblical” in their proportions and 40 or more towns have been isolated over an area the size of Texas. Rockhampton, in the middle of the region, has been particularly badly hit and is completely surrounded by brown flood-water.

Waters had started to recede but new downpours are increasing the likelihood of flash-flooding.

4,000 people have been evacuated from their homes since Christmas but some have vowed to stay on despite warnings that they are at risk. ‘Cowboy’ Burnett and Brian ‘Moose’ Malone (above) seemed unfazed today as they drank beer at the Pioneer Hotel in Rockhampton.

Those still trapped by the water are demanding food drops from the emergency services.

The mayor of Rockhampton, Brad Carter, has slammed the “irresponsible” decision of some residents not to leave their flooded homes and told them not to expect any more supplies from the emergency services.

“We have taken a decision, and we make it very clear, that we cannot put emergency services resources at risk bringing in those supplies,” Carter said.

“They have to now respect and understand that because they make that choice they will not be getting resupply of essential services, goods and grocery items provided by emergency services personnel.” 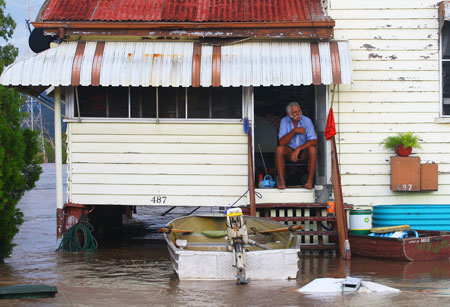 Queensland Police superintendent David Peff backed by Carter’s claim that dropping food to trapped residents is too dangerous for the emergency services. Poisonous snakes in the water make wading though it an extreme hazard.

Some Rockhmapton residents will stay on defiantly. Among those is 90-year-old Ellen Boswood who has lived in her home since she was three and stayed on through the floods of 1954.

“I’m not worried, I’ve been there, done that,” Bosworth told the Courier Mail.”I stayed then, I had everything I wanted.”

Ten people and thousands of animals have been swept to their death by the floods while billions of dollars damage has been done to crops, roads and bridges. It has been Australia’s wettest year on record.

The beauty of Corsica, France

Gay marriages in churches to be allowed