The Australian floods continue to wreak fear and devastation as thousands of Brisbane residents flee their homes for higher ground.

The Brisbane River is expected to peak at 18 feet on Thursday as the floods continue to threaten lives and livelihoods. Already swollen, it is carrying trees, boats and steel pontoons ripped from their moorings.

The death toll from the devastating floods swamping southeast Queensland has risen to 12, with another 51 people missing.

Brisbane, the capital of Queensland and Australia’s third most populous city has braced for widespread flooding across more than 50 suburbs

Premier Anna Bligh has described the floods as “the worst natural disaster in our history”.

It is estimated that 19,700 homes and 3,500 businesses will be hit by the rapidly rising torrents.

In some places water rose more than three feet in a matter of hours, catching many homeowners off-guard.

Residents of low-lying neighbourhoods were trying to protect their homes with sandbags and tarpaulins and remove their precious possessions before the peak.

In the suburb of Milton, close to the banks of the river, Meredith Evans was moving all of her worldly possessions as high up as possible.

“We just don’t know how bad it is going to get, but we are preparing for the worst,” she said.

Mrs Evans, her husband and two children, will spend the coming days staying with friends on higher ground and hoping that their home survives the flood.

“The water rose at one step an hour on the back steps, all of the garden is under, so we don’t know what we will find when we get back.” 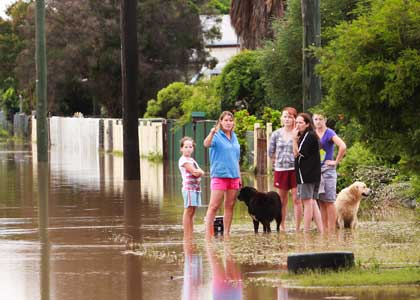 Priime Minister Julia Gillard has been to visit residents who are sleeping in an evacuation centre set up in the city’s RNA Showground away from the river.

“There’s an eerie sense to it all,” Gillard told reporters.

“The sun is shining but we know the floodwaters are wreaking damage.”

Elsewhere in the area, scores of volunteers were forming human chains to move furniture from homes onto the back of waiting trucks, as the muddy water climbed inch by inch.

In the low-lying neighbourhood of Rosalie, the water had already inundated the main street, reaching almost to the awnings of shops and engulfing several homes. The only way to navigate the handful of streets already under water was by boat. By mid-afternoon, the waters were lapping at

the tops of roadsigns and were estimated to be up to 6ft deep.

Bligh urged resident to help each other out.

“We need to make every effort to stay calm and stick together. If you live on high ground, now is the time to reach out and offer help to neighbours … and offer a bed for the night.”

There are fears that fuel would run low as petrol stations have become clogged with drivers filling up in a panic.

Heavy raining was still falling as shoppers also flocked to supermarkets to stock up on supplies. 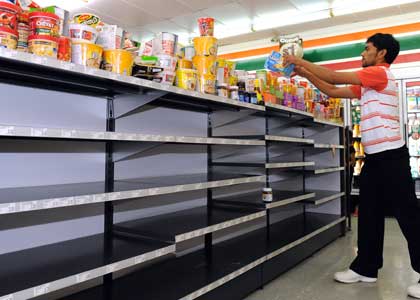 The floods are not expected to halt until Saturday at the latest despite blue skies and sweltering temperatures.

In the centre of Brisbane, police were preparing to blow up several large ferries and pleasure craft that had come loose from their moorings in an attempt to prevent them becoming “floating torpedoes” in the river’s raging current.

Across the central business district, streets emptied as the public transport system was suspended and power was cut to several blocks.

Bligh warned residents that the next 48 hours would be crucial.

“We’ve seen some dark days already, but the darkest days are still ahead,” she said.

“This is a very serious event, it will create enormous disruption and dislocation.”

All thats missing is Vegemite