Meantime Brewing Company have launched the UK’s first ever ‘hidden audio tour’ of London’s brewing history from the 18th century to today.

Craft beer fans across the capital are being invited by Meantime to follow the rich history of the city’s drinking heritage via a series of recordings which have been geo-tagged to significant locations from London’s brewing past.

Using cutting edge location-based social media technology, the recordings are discoverable only in the location pertaining to the specific stop on the tour. Each of the recordings are narrated by leading names in British brewing, featuring beer experts, journalists and celebrity craft beer fanatics.

Following the path of the Thames from central London to Greenwich, each location further unearths the almost forgotten legacy of London brewing painting a picture of the brewing and drinking culture in the city from the 18th century right through to the present day.  Starting on Thrale Street near London Bridge, the spiritual home of London brewing, the tour takes in several spots around Southwark and Bermondsey before heading toward Greenwich and stopping off at the state-of-the-art Meantime Brewery – where the UK craft beer revolution was born. 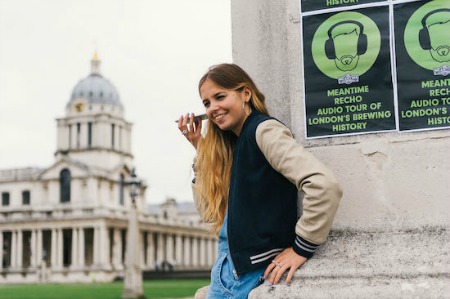 Alongside audio from Meantime’s team other voices include the likes of author and comedian Danny Wallace, celebrity chef and broadcaster Matt Tebbutt, Jonny Pile from Shortlist Magazine and former Masterchef winner Tim Anderson.

Rod Jones, Beer Sommelier Of The Year and Tour Guide at Meantime says: “18th century London was the epicentre of the brewing world, a metropolis that produced beers that quite literally shaped the world’s drinking culture. Today London’s brewing scene is brimming with life once again, and with the advent of Recho, this unique location based technology allows us to tell that story by tying pockets of knowledge to a sense of place in an exciting and innovative way.

“By encouraging fans of craft beer to harness the power of their smartphone, we hope to enable them discover what makes this brewing city great – and why it firmly deserves its place in the books of brewing history.”

To take the Meantime Recho Brewing tour of London, simply download the Recho app from the app store and go to Thrale Street to begin!

UK firms set to hire at fastest rate in 16 years