Australian man injured at Running of the Bulls, Pamplona

An Australian and a Spaniard have
been injured on the second day of the San Fermin Running of the Bulls festival in the
Spanish city of Pamplona, organisers said.

The
Australian is aged 18 and comes from Melbourne while the 20-year-old
Spaniard is from the northern city of Saragossa, a spokesman said. Both
were taken to hospital.

The festival spokesman would not give
details on the injuries suffered but said neither was believed to have
been touched by the bulls’ horns.

“It
went surprisingly smoothly which was good for the novices. It was all
over in two-and-a-half minutes – there were no bulls that went astray.”

While she didn’t see the Australian get injured, Kent said the opening ceremony provided its fair share of casualties.

“A
girl hurt herself jumping of the Muscle Bar Fountain. Another guy broke
his leg. I think more people hurt themselves doing that than in the
actual run.”

She said a “really electric atmosphere” was in place in Pamplona and that Antipodeans, as usual, were out in force.

“There’s barely any locals.
They’re all Kiwis, Aussies and English. That means there’s no experienced
runners. People have only what their mates have told them and what
they’ve seen on YouTube as a guide.” 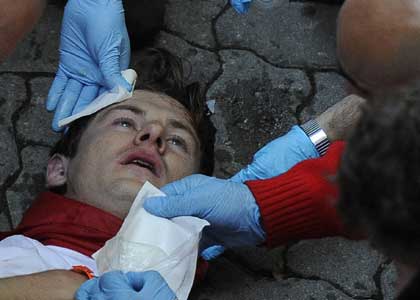 The bull runs have claimed 15 lives since 1911 and each year dozens of runners are injured.

Last
year, a bull gored a 27-year-old Spaniard to death, piercing his neck,
heart and lungs with its horns in front of the hordes of tourists

The 8 a.m. run is the highlight of the nine-day street drinking festival. It comes after a full day and night of hard partying at the San Fermin
fiesta that unofficially ushers in Spain’s summer party season and lasts
through August.

Dozens
of runners, dressed in the festival’s traditional white shirts and
pants with red sashes, sing a chant to a statue of San Fermin at the
start of the route seconds before a firecracker rocket blast signals
the release of the bulls from the pen.

Thrillseekers then race to keep ahead of six fighting bulls and six
bell-tinkling steers tasked with trying to keep the beasts together
along the 850m course. 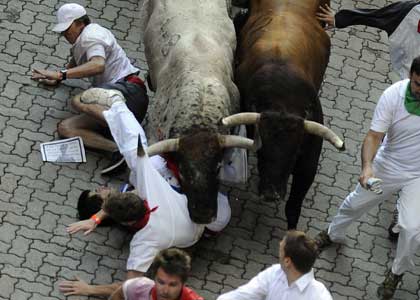 Man rescued trying to get to Bermuda in a floating bubble