He was drinking and catching up with friends in Kuta, an area of Bali popular with Aussies and holidaymakers.

Suddenly there was a blinding, sizzling orange flash of light, and an ear drum-bursting bang that was so loud, it was heard miles away.

A woman was thrown in the blast and landed on top of Nash, her body shielding him from the severity of the explosion and protecting him from certain death.

As he stumbled out of the blast zone, Nash looked down to see his skin “hanging off” and a hole in his leg.

His body was covered in burns and his stomach and legs were mangled by shrapnel.

He said he sat on a chair “just watching the mayhem” before two Australian men helped him into an ambulance.

He recounts the story as though it happened yesterday. But October 12 marked 10 years since the Bali bombings devastated Kuta.

Three separate explosives went off – including a large car bomb and a third smaller device detonated outside the US consulate in Denpasar – killing 202 people: 88 Australians, 26 Brits and three New Zealanders.

“I saw people on fire and people trying to put out fires with bottles of water,” said Nash, who suffered burns to 53 per cent of his body in Indonesia’s worst terrorist attacks.

He was flown to Darwin and placed in an induced coma, before being transported to Brisbane where he remained in a coma for three weeks – he stayed in hospital for three months. 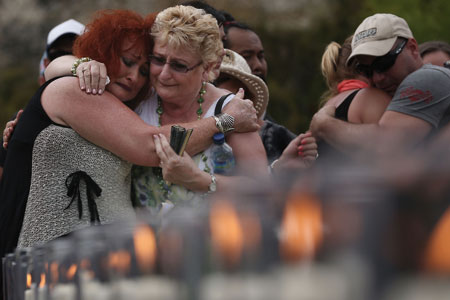 “I was on the edge of passing away, but managed to pull through,” he added.

A decade after the terrorist attack, Nash, who is the vice-chairman of the Bali Peace Park Association, returned to Bali to pay tribute to those who did not survive and to visit people he has not seen since the first anniversary.

Mourners gathered under Australian flags as they listened solemnly to a mournful roll call of the dead, some crying or leaning on loved ones’ shoulders as they observed a minute’s silence.

Speaking at the event, Australian Prime Minister Julia Gillard recognised the terrible legacy of the attacks, saying “wounds and scars abound, healed and unhealed, but nothing can replace the empty seat at your table”.

But she also praised the resilience of her country, saying Indonesia and Australia, sometimes edgy neighbours, “drew closer” than ever before.

Indonesia, which has the world’s biggest Muslim population, won praise for its law-enforcement actions after the bombings, and was also lauded for its response after subsequent attacks in 2005, in which 20 people were killed.

Families of the Australian victims, many of whom were young holidaymakers and members of touring sports teams, made the journey, seeking closure to a painful decade.

“I lost my two daughters in the Bali bombing,” said Danny Hanley, father of victims Renae and Simone, who died from her injuries several weeks later in a Perth hospital to become the 88th Australian killed in the attacks. 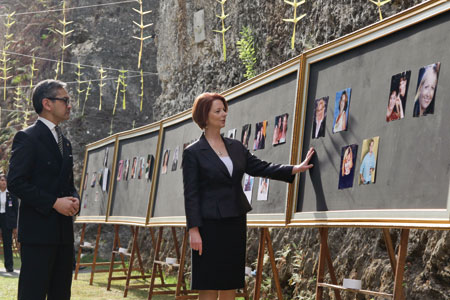 “As we go forward into this new decade year, let us go out with the patient power of knowledge that our God will go with us,” he added.

For forensic pathologist Dr Putu Alit, who works at Denpasar’s Sanglah hospital, the trauma of that night is still vivid in his mind.

He and his colleagues worked around the clock for weeks after the blasts, with some bodies so badly disfigured that identification took up to three months.

“Not all we can identify,” he revealed. “About six victims and 38 body parts (unidentified after three months) because they are in bad condition.”

The explosions were so massive, some victims were said to have virtually vaporised, leaving no remains.

Even 10 years later, two are still unnamed. “Many had severe burns and victims came in many body parts,” he added. 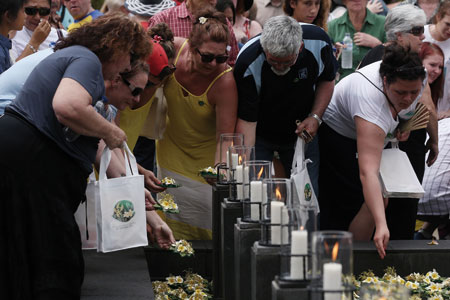 Speaking the day before the 10-year memorial, Australia’s Opposition Leader Tony Abbot called the atrocities “an attack on civilisation”.

As the bombers targeted areas frequented by Aussies, he also said they were “an attack on Australia”.

The strike by the al-Qaeda-linked group Jemaah Islamiyah, which also left scores of people with horrific burn wounds, came one year after the 9/11 attacks in the US.

Since the attacks, those responsible for the atrocity – the planners, recruiters, bomb makers, bombers, chemicals experts, financiers, drivers and protectors, have either been executed, killed by police in raids or jailed.

Three were tried, convicted and executed, shot by firing squad.

Four were killed in shoot-outs with police after years on the run. Some are still behind bars. Two died in the bomb blasts themselves.

Abbott said it was to Australia’s credit that it didn’t lash out in fury at another country or religion, and instead worked with Indonesia to bring the perpetrators to justice.

“We will always be grateful to Indonesia and its people for doing so,” he said.“Our country was at its best in the aftermath of Bali.”

As thousands of people gathered around the world to honour the victims,

Abbott added that the memorials, where those affected could stand shoulder-to-shoulder, were vital and necessary, “to say to our country’s enemies you can hurt us but you can’t break us”. 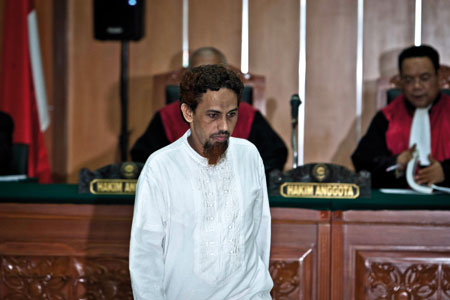 Bringing those responsible for the Bali bombings to justice has been a long road.

The last major piece of the puzzle wasn’t complete until last year, when bomb-maker Umar Patek was captured in Pakistan.

He is serving 20 years in jail after nine years on the run.

Nicknamed the “demolition man”, Patek, 46, was found guilty of premeditated murder for his part in helping build the car bomb that devastated the clubs.

It brought a 10-year investigation to an end.

Patek was captured in Abbottabad, where Osama bin Laden was killed by US Navy Seals four months later.

Patek argued he had played a small part in the attacks, which, he said, were in revenge for Western policies that had harmed Muslims.

He apologised to the families of the 202 victims, and, upon hearing the verdict, shook the hands of judges and prosecutors, before hugging his lawyer and walking out of court.