President Barack Obama’s original long-form birth certificate has been released to bring to an end the “birther debate” in which members of the opposition argued that he was born overseas.

Obama will discuss his decision to release the certificate tomorrow morning.

“The president believed the distraction over his birth certificate wasn’t good for the country,” White House Communications Director Dan Pfeiffer said. “It may have been good politics and good (television), but it was bad for the American people and distracting from the many challenges we face as a country.”

“At a time of great consequence for this country — when we should be debating how we win the future, reduce our deficit, deal with high gas prices, and bring stability to the Middle East, Washington, D.C., was once again distracted by a fake issue,” Pfeiffer added. “The president’s hope is that with this step, we can move on to debating the bigger issues that matter to the American people and the future of the country.” 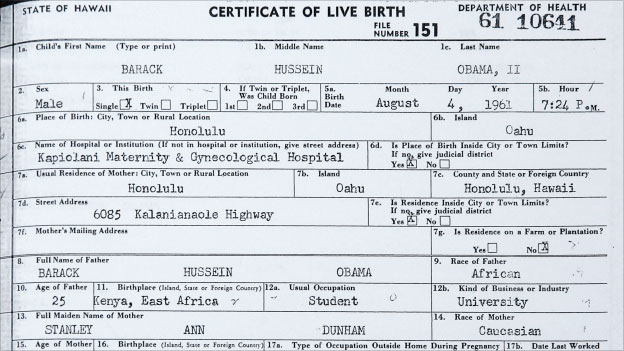 Barak Obama has been forced to release his long-form birth certificate.

Although Obama released a legally binding “certificate of live birth” in 2008, his opponents still argued that he was born overseas.

A CNN/Opinion Research Corporation poll showed that almost 75 per cent of Americans believe Obama was definitely or probably born in the United States.

But more than four out of 10 Republicans think Barak Obama probably or definitely was not born in America.

Many of Obama’s opponents think Obama was born in his father’s home country of Kenya.