Trans-Siberian railway: Journey of a lifetime

Climb on board the Trans-Siberian for an epic rail journey that’s on every do-before-you-die list.

The Trans-Siberian railway has come to mean much more than the train journey across Russia it originally described. As well as the route between Moscow and Vladivostok, it’s now a catch-all for any train journey in this area – in fact, most travellers doing the ‘Trans-Sib’ will usually be heading from Moscow through Siberia, then across Mongolia to Beijing (or vice versa) – officially, the Trans-Mongolian.

But names and places aside, this epic rail journey has also come to symbolise the ultimate in do-before-you-die travel. It’s an adventure crossing time zones and cultures, continents and (depending on your route) countries. If you’re still looking for reasons to go, here are 10 you might not have thought of.

It takes seven days to travel straight from Moscow to Vladivostok, and six to Beijing, so even if you’re stopping on the way, each leg is far longer than your average commute. The journey between Yekaterinburg and Irkutsk is 52 hours, for example. Don’t fight the time, think duvet-day and embrace it. When else will you have hours stretching before you with little to do but eat, sleep, chat and read? If you ever wanted to get through Tolstoy’s War And Peace, this is the time. What’s more, the accepted dress code is tracksuit and slippers. Sit back and relax! 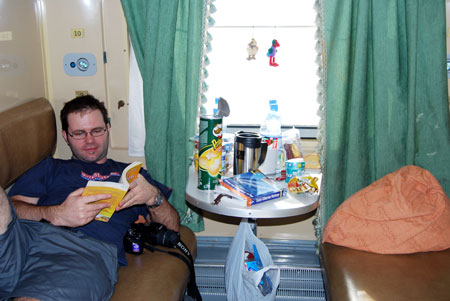 Don’t forget your slippers on the Trans-Siberian railway.

2. My way or the railway

Each carriage is ruled by a train attendant known as a provodnitsa, if they’re female, or provodnik, if they’re male – though this is rare until China. They don’t suffer fools (make your cabin a mess as I did within five minutes and you’ll learn the hard way), but you’ll soon come to appreciate their Draconian rule. Most provodnitsas will work hard to keep their carriage neat and tidy – vacuuming the corridor, cleaning the toilet and sorting out the bedding. On occasion, you may even find them running an off-licence and pirate-DVD store from their cabins.

Business-class flights, eat your heart out: on the Trans-Siberian you get a bed even in second class. So it might be a bunk in a four-berth compartment and the chances of you getting champagne on departure are slim (though I’d like to see you ask the provodnitsa), but nothing beats being lulled to sleep by the gentle rock of a train. During the day, passengers in second class tend to sit on the bottom bunk regardless of whose bed it is, so you might need to get up at a respectable hour if you’re not up top. Other options include two-berth compartments in first class and open-plan bunks called ‘platskartny’.

The food might be hit and miss, but the restaurant car is the social hub of the train, perfect for a few beers, card games and the odd bit of drama. While minding my business one evening a waitress emerges in a skimpy dressing gown to flirt outrageously with a man from first class. Another night our game of cards is interrupted by an entire Russian volleyball team bound in, clad in their team strip and hunched so their heads don’t hit the ceiling.

Most passengers tend to bring their own supplies and take it in turns to eat in their cabin, rotating round the table in a slow-paced game of musical chairs. At the end of each carriage is a samovar – a vat of boiling water – where you can make yourself hot drinks, instant noodles or packet soups.

The Trans-Siberian is such a different experience from winter to summer, you could easily justify doing it twice. Warmer weather makes for a breezy, balmy journey and there will be more travellers doing the trip as a result. In winter the train becomes a cosy cocoon and the samovar your best friend. You’re more likely to share your carriage with locals, rather than other tourists, at this time of year so pack a Russian phrasebook.

Given the lengthy journeys, it’s good to get some fresh air and stretch your legs when the train comes into a station. It’s also a good time to top up dwindling food supplies – local vendors meet the train armed with homemade dumplings and giant pans of borsch. The train won’t stand in the station a second longer than scheduled, though, so don’t stray too far, and always take your money belt.

8. Strangers on a train

Unlike the Tube, chatting to fellow passengers on the Trans-Siberian is part of the experience. I shall always be grateful to Lena – her fur coat might have taken up half our cabin, but she schooled me in train etiquette in no time. And there’s nothing like staring out a window together to make secrets bubble to the surface. Mikhail, eyes fixed on the passing forest, confesses that he could never love again after the woman he gave his heart to married another. 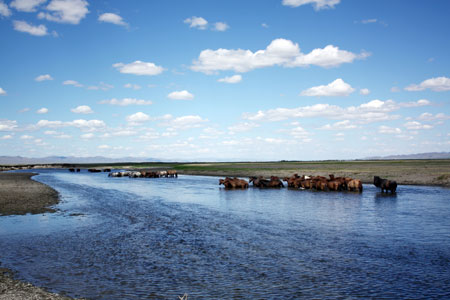 See the Mongolian wilderness from the Trans-Siberian express.

Much of the journey between Moscow and Irkutsk is an endless blur of coniferous forest known as taiga. But leaving this city (or approaching it if you’re heading east to west) you get treated to views of Lake Baikal, icy white or shimmering blue, depending on the season. Through Mongolia to Beijing, steppe then (Gobi) desert stretches far into the distance, the sand eventually giving way to paddy fields and small villages until – the icing on the cake – a glimpse of the Great Wall of China.

The Trans-Siberian crosses five time zones (seven if you’re going to Vladivostok) but the trains in Russia run on Moscow Time. Combine this confusion with the fact that journeys can be several days in length and it’s best to forget about time entirely and adjust your watch on arrival. 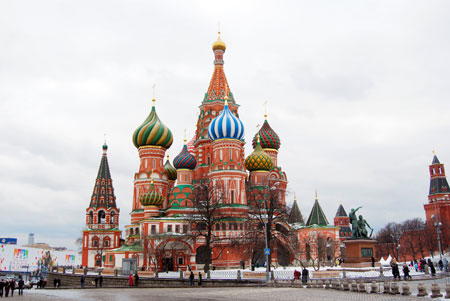 Must-do stops along the way

Moscow, Russia
Start or finish your Trans-Siberian journey with a trip to the Red Square for St Basil’s Cathedral, Lenin’s mausoleum and the nearby Kremlin. By night, see ballet at the Bolshoi Theatre, or splash some
cash in the city’s top nightclubs.

Yekaterinburg, Russia
Go hiking, ice fishing or dog sledding in the nearby Ural Mountains, stopping for a photo at the border between Europe and Asia. Yekaterinburg is also famous for its bloody history, home to the Romonov royal family assassination, one of Stalin’s Gulags (concentration camps) and a graveyard dominated by towering monuments to fallen mafiosa, testament to the city’s once-rampant mob culture.

Irkutsk, Russia
Jump off for the ‘Pearl of Siberia’ Lake Baikal. The small town of Listvyanka is a good base, on the shores of the world’s deepest lake. You’ll have a very different experience of Baikal depending on when you visit – taking a dip in crystal clear waters in summer, or snowmobiling on two-metre thick ice in winter.

Ulan Ude, Russia
The capital of Buryatia is a good stop for exploring the main religion of this autonomous republic: Tibetan Buddhism. Monasteries and temples dot the stark landscape, including the centre of Buddhism in Russia, Ivolginsky Datsan, a complex of temples and prayer wheels with colourful flags hanging from the trees, and a pen for the sacred roe deer.

Ulaanbaatar, Mongolia
With Soviet buildings towering over felt tents (gers) and fashionable teens jostling elderly men in traditional dress, the capital of Mongolia is an intriguing city. But its main attraction is its proximity to the Terelj National Park. Make like Ghenghis Khan and go riding over the vast Mongolian steppe, before bedding down in a traditional ger.

Beijing, China
In the wake of the 2008 Olympics, Beijing might be more sleek and modern, but the city’s charms lie with
its ancient history. Head over Tiananmen Square to the Forbidden City before cycling through the rapidly disappearing hutong (narrow alleyways). Don’t leave without taking a trip out of town to walk on a certain big wall.

When to go: You can go all year round so choose your departure date according to what you want to do en route, such as swimming or dog sledding.

The route: The Trans-Siberian railway runs from Moscow to Vladivostok. The Trans-Mongolian runs through Mongolia between Beijing and Lake Baikal. There’s also a service via Harbin that bypasses Mongolia (the Trans-Manchurian), and another that branches off the main line towards the north-east Russian coast (the Baikal-Amur or BAM Railway).

Money: Take a debit/credit card and a mix of Euros and US dollars. Withdraw or exchange what you need along the way. You can’t buy Russian Rubles or Mongolian Tugriks in the UK.