Barge on in: glide through the English countryside on a floating backpacker hostel

But it’s not long before our hosts on Britain’s only floating backpacker hostel tackle the entanglement and we’re on our way, revelling in the tranquillity as we gaze across rolling green fields and glide under old, stone bridges.

I’m one of seven guests aboard the Wandering Duck Canal Boat Experience, run by well-travelled couple Mark and Ruth Bratt.

The pair operated a backpackers’ hostel in Kaikoura, New Zealand, for 18 months and on returning home decided canal-cruising accommodation would be a fun alternative.

Named Rakiraki (Maori for duck), the narrowboat is about 7ft wide by 70ft long. Our home for the next two nights boasts a lounge, kitchen, two bathrooms and two four-bed shared-bunk cabins for guests. Space is tight, but that’s all part of the adventure.

Joining me and my Aussie friend are three Liverpudlians and two Irish lasses. As we settle in with drinks from the ‘Honesty Bar’, which even includes a hand-pump with real ale, we hear how the Wandering Duck idea was hatched.

“We wanted to find a way to give people an experience which would be uniquely British,” Mark says. Britain was first to develop a nationwide canal network, which played a vital role in the Industrial Revolution. 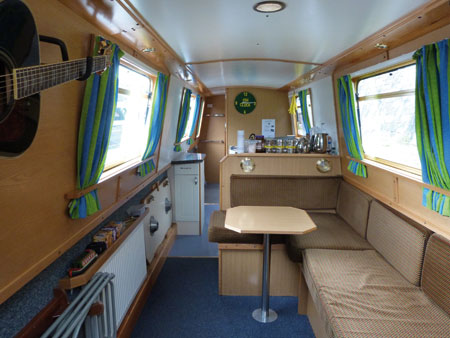 While railways ended their commercial use, it also meant canals weren’t modernised here like in other parts of Europe.

“I love the way they developed this system in the 1800s and just stuck with it. I definitely think it’s part of the draw,” Marks adds.

Next morning, I rise early and soak up the morning sun on the bow of the boat, accompanied only by the gentle chug of the engine. With a speed limit of 4mph, there’s no chance of feeling rushed. It’s a welcome change of pace from London.

The distance between our departure point at Hyde, near Manchester, and end point at Bugsworth Basin in the Peak District is roughly 10 miles, but as we’re on the Locks and Tunnels tour, we’ll pass through 16 locks and the Rakiraki will rise about 210ft.

“There are more than 2000 miles of canals in Britain and being manmade they are elevated so you get those beautiful vistas,” Mark says. Ruth warns us about the 14ft-deep locks – if you fall in you could be dragged under by the suction of the emptying water, crushed by the 25-tonne boat or struggle to stay afloat in the aerated water as it fills.

But we aren’t deterred and take turns winding the paddles open and shut and throwing our weight behind the hefty gates. It’s a full-body workout. For a more laidback experience, Wandering Duck offers a Relax and Enjoy tour on the lock-free route from the Peak District to Macclesfield and vice versa.

“A guest on that tour described it as ‘legitimate idleness’,” Ruth laughs.

After lunch there’s only a few swing and lift bridges to operate, so some of us have a go steering the boat. At 6pm, we moor and decide to tramp the hour-and-a-half New Mills circuit, which includes the stunning Millennium Walkway, a path suspended over the River Goyt between a towering wall and an abandoned centuries-old mill.

Returning to a hearty dinner, it’s been a long day in the best of ways. “It’s so peaceful I feel like I’ve been on holiday for a year,” guest Tim says. “The hardest decision I’ve had to make is red or white wine.” 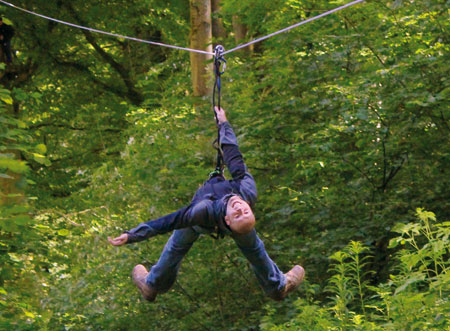 The next morning we cruise for two hours before heading to the historic spa town of Buxton, well worth exploring for its Georgian architecture and warm springs.

But we’re bound for the zipwires of nearby tree-top adventure park, Go Ape!

We enjoy a fantastic afternoon flying through the foliage, but I must say I’m sad to bid farewell to the canal boat lifestyle. I could definitely get used to it.

A two-night canal boat trip costs £95 midweek and £115 on weekends, including all meals, hot drinks and snacks.
wanderingduck.co.uk

Trains from London to Manchester Piccadilly cost from £24 return.   virgintrains.co.uk

Connecting trains from Manchester to Hyde Central or Romiley, Whaley Bridge to Buxton and Buxton to Stockport cost about £3.50 each way.  northernrail.org 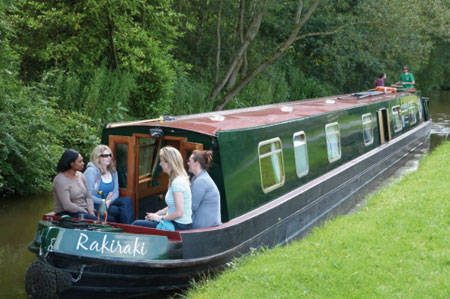 Thompsons Café has been serving fish and chips in Buxton for over a generation. Try the prawn with Marie Rose sauce cod bap or the wholetail scampi. Meals from about £2.50.
thompsonscafe.co.uk

If you want to experience a quintessential English tea room, you can’t go past No. 6 The Square Tea Room in Buxton, where you can relax in the Georgian elegance of a leafy square opposite the Opera House. Mains from £4.95.  no6tearooms.co.uk

The King’s Head, located on the Market Place at the top of Buxton, has an extensive range of real ales from £3 a pint.
kingsheadpubbuxton.co.uk

A coaching inn not far from the Peak Forest Canal, the Duke of York is the perfect spot for a drink if you’re meeting the Wandering Duck in Romiley. Pints from £3.  dukeofyorkromiley.co.uk

If you’re exploring Manchester before boarding the Wandering Duck, crash at a Hatters Hostel. Beds from £11pn.  hattersgroup.com

The Westminster Hotel in Buxton is a comfy spot to recover from your exertions at Go Ape! Rooms from £35pppn.
westminsterhotel.co.uk