Be ‘Dammed in Amsterdam: Swap toking for boating for a genuinely laid-back experience

“Something to eat, then something to fuck!” roars an enthusiastic British tourist, to howls of approval from his cluster of buddies. Anywhere else, I’d think that kind of public oversharing to be, well … crass at best.

But I’m earwigging on this gang of good-timers on Amsterdam’s Warmoesstraat, an anything-goes haven where most of the street clearly has identical plans for the evening.

To my right are clubs Fuxxx and Dirty Dicks, stalwarts of Amsterdam’s infamous leather scene.

(Oh and a rack of cheerfully snuggly ski hats that read: ‘AMSTERDAM’). 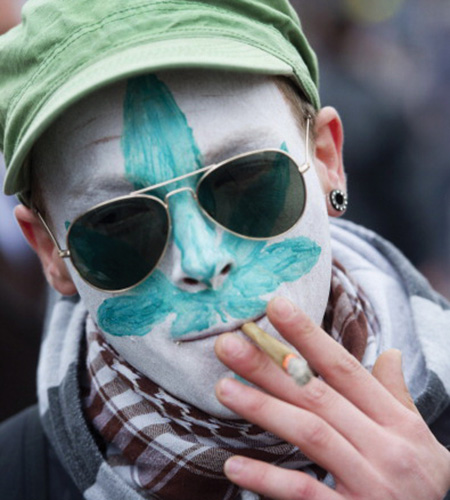 Just a block away is the Red Light District, where girls wearing only lingerie are posing in brothel windows, their expressions as blank as mannequins.

And to my left are a bunch of coffee shops with signs in the window saying: “You can drink and smoke here!”

From the pungent wafts of weed I can smell drifting out in the street, I certainly believe them.

If there’s anywhere else like central Amsterdam, I’m yet to hear about it.

The atmosphere is charged with the breathless excitement of tourists nervously buying drugs and sex (and expecting a bolt from the sky to strike them down), but offset by nonchalant Amsterdammers who sit around puffing, chatting and scrounging Rizla papers from each other.

From January 1 this year, only residents of the Netherlands were supposed to be allowed to buy cannabis, but unsurprisingly, Eberhard van der Laan, Amsterdam’s mayor, has refused to enforce the ban in his city.

After all, a third of the seven million tourists that visit each year spend at least part of their holiday getting gleefully blitzed in the coffee shops. 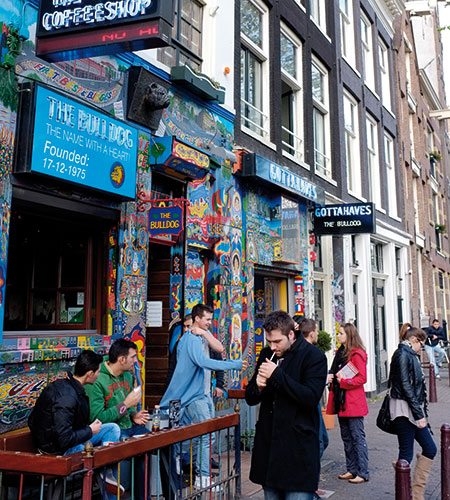 I’m not here for the pot, however, but for Amsterdam’s equally famous but far more wholesome feature: its beautiful, winding, tree-lined, bicycle-friendly, iconic canals, which celebrate their 400th anniversary this year.

Over 100km of waterways were dug in the 17th century, and they loop around the city centre in concentric circles, all seven feeding out into the wide and placid Oranjesluizen lake.

And on a serene bank of this lake, there’s a warm and cosy houseboat waiting for me.

So I beat a hasty retreat from the ‘Dam’s dens of iniquity, hop on my bike and cycle back to it. The houseboat I’m staying on is as elegantly sophisticated as the city centre is debauched.

It’s the kind of place I dream about owning, but it really belongs to Ton Van Beers, a tall, tortoiseshell glasses-wearing Dutchman, who lives on his other boat, next door. 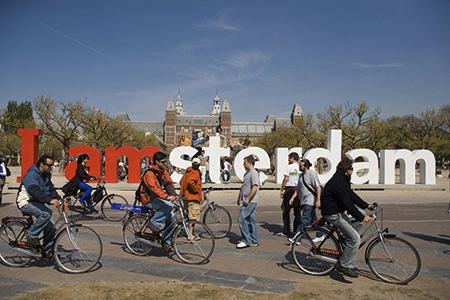 He’s a man who gives the impression of having completely nailed the art of living the good life.

Three decades ago he bought a hull for about £1500, and over the next few years, transformed it into a family home.

“The best thing about living on a boat is that it lets you have the illusion of being free – Amsterdam people are a little … anarchistic,” he says, smiling.

”In the Eighties there was such a shortage of accommodation that people took to the water. But it only actually became legal to live on a houseboat about 10 years ago. By then we already had a whole community living here.”

He says everyone just learned how to manage by trial and error. 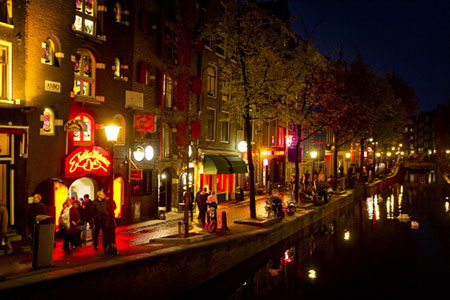 “It was a great way of connecting with people – once a week everyone from the boats around here would have dinner together, discuss any issues we were having with the boats and help each other out.”

Even now, it seems as though the boat-owners are a very tight-knit group. Beers says everyone keeps an eye out for each other, and he never locks his doors.

”This community is full of people that are very unconventional,” he adds.

As I clamber over the deck later, breathing in the cold, fresh air, and watching the ducks potter about in the water below, I think illusion or not, I’d choose this kind of Amsterdam anarchy any day. 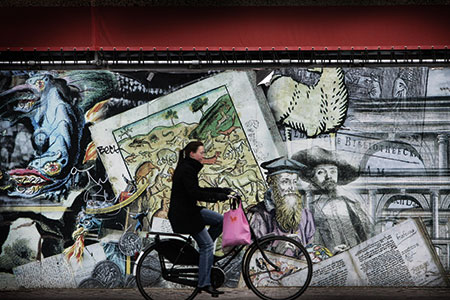 Budget: They keep things simple at Zomerijs. It’s waffles and ice cream or waffles and whipped cream, but they’re done to perfection.

Midrange: If your vice is cheese, the cafe-cum-shop at Cheese Factory is going to be a dangerous place for you, as free samples are given out with abandon.

The adjoining cafe serves cheesy dishes such as fondue, as well as soups, salads and pastas. Mains cost about £6.

Luxury: Old-fashioned Dutch grub is given a gourmet makeover at the swanky Restaurant Greetje.

A sample dish is a grilled sandwich of traditional Frysian sugar bread with home-style duck liver pâté and apple syrup. Mains start from around £20. 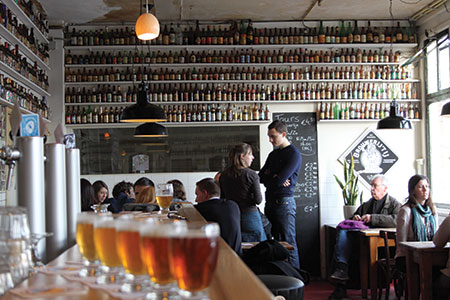 Budget: There can’t be many more iconically Dutch places to drink than Brouwerij ‘t IJ, an independent microbrewery housed next to one of Amsterdam’s few surviving windmills.

A taster selection (five small glasses) of their brews costs £6.50.

Midrange: OK, so technically you’re more likely to come to Hill Street Blues to smoke rather than drink, but they serve alcohol here, too.

There’s a grungy atmosphere and the staff are welcoming and chatty.

Luxury: The very upmarket Bubbles and Wines bar does what it says on the tin – it’s a smart and sophisticated place known for serving great tapas with high-quality plonk. 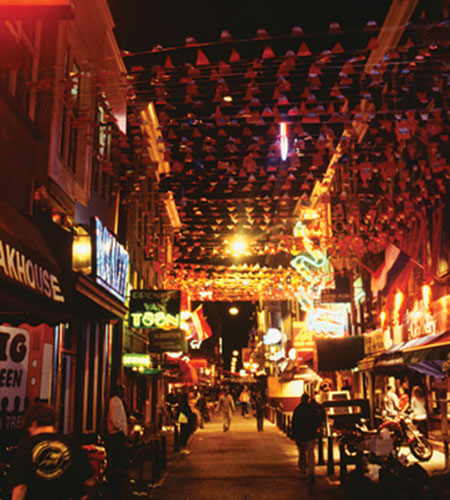 Budget: Enormously popular, The Bulldog Hotel is on the quieter side of the Red Light District, meaning you’re minutes from all the bar and club action.

Midrange: Rooms are small but clean in Hotel Internationaal, which can be found on Warmoesstraat, one of Amsterdam’s most buzzing streets.

There’s a cosy bar downstairs, perfect for a foamy pint on your way out. Doubles cost from £41pn.

Luxury: The NH Grand Hotel Krasnapolsky is housed in a beautiful historic building in central Dam Square that dates back to 1866.

Rooms are airy and filled with light, and many of them look out over the canal. Doubles start from £111pn.

Fly from London Heathrow to Amsterdam from £120 return with Royal Dutch Airlines.  klm.com

Float on, in Egypt: After Cairo, we go back to basics with a chilled-out felucca ride along the Nile…