Beach holiday: Samoa is explosive and idyllic all at once

Stepping foot in a strange, unwesternised land for the first time, having travelled through the night with no sleep, there’s certain things you learn to brace yourself for on arrival, with the excitement of discovering a new place tinged with the anxiety of getting through those first few hours. Concentration is the order of the day as you negotiate your way past grumpy customs officials and money-hungry touts pushing everything from taxis to tours.

Arriving in Samoa, however, things are not as we expect. We’re immediately met by a sign declaring, “welcome to paradise”. Fair enough, I think. After all, every airport in the world loves a bit of friendly national marketing. However, that’s just the start as, and maybe it’s the lack of sleep talking here, by the time we’ve made it into the glaring morning sun outside Faleolo International Airport, after swaying to the live quartet singing away next to the luggage carousel, and got past the beaming customs man who kept calling women with babies to the front of the queue, I’m starting to think that Samoa may well be some kind of paradise.

It’s fair to say that, keen rugby fans aside, most people know almost nothing about the 10 islands that comprise Samoa. For years now, Fiji, with its desert island beaches and cheap prices, has been the go-to destination for travellers looking for an idyllic, budget-friendly South Pacific getaway. But times they are a-changing, and the Samoans are going all out to attract backpackers to their fair shores.

Historically more aligned with the US, the powers-that-be have decided it’s time to make a seismic shift and buddy up with their culturally and geographically closer neighbours, Australia and New Zealand. It started a few years back when drivers woke up one day to suddenly discover they had to drive on the left, rather than right, hand side of the road. The next major step happened on New Year’s Eve, sadly after our visit, when Samoa redrew the international date line, placing themselves on the Aussie, rather than American, side.

The impact of this for people wanting a short break is huge, as Samoa is no longer a massively disorientating 21 hours behind Sydney, but now a much simpler three hours ahead. 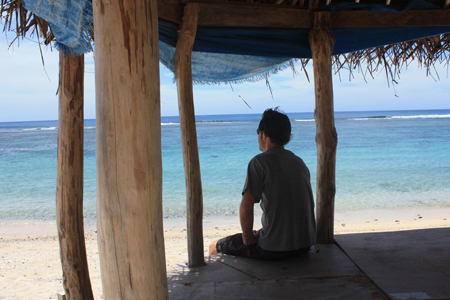 And so, travelling pre-date line change (meaning we have no idea what day it is), we start our Samoan adventure on the main island of Upolu, which is home to the capital Apia, more an amalgamation of sprawling villages than a bustling metropolis, before jumping on the ferry to its bigger, but quieter neighbour Savai’i. With our trusty guide Anthony at the wheel, we set out across the rainforest-clad isle as beaches sparkle on one side and volcanic peaks rise in the distance on the other.

Regularly passing through villages every few minutes, where locals lounge in the shade of the traditional totally open buildings, or fales, we seemingly meet every car we pass with a friendly hoot.

“It’s a small place,” Anthony explainswith a shrug. “Family is everywhere,” he adds, citing an old Samoan saying that people have more roots than a tree, meaning that everyone knows everyone. It’s great because you always feel welcome, but less so if you’ve got your eye on a girl, he quips with a cheeky twinkle in his eye.

Over the next few days we spend our time exploring the island, which is the fourth largest in Polynesia, after New Zealand and Hawaii. On one trip we stop off at the Alofaaga Blowholes where, on a good day, the water powers through the lava tubes, bursting more than 10 metres into the air. And like everything in Samoa, they come with a good story, with the blowholes symbolising an old Tongan princess who died in Samoa, when the country was a Tongan colony. Now, whenever the blowholes blow, it is said to be a sign of her king sending his love. 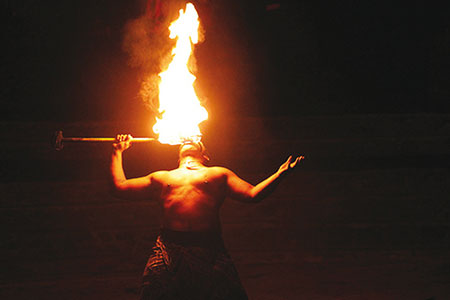 Next we set about exploring Savai’i’s volcanic sights, which are as plentiful as they are bizarre. From scrambling over the post-apocalyptic scenes of the Saleaula Lava Field, complete with a roofless church half-filled with the wave-like black rock, we head to the Tafua Crater, where we scale the second highest of the island’s 450 volcanic cones, catching our breath at the top as we gaze with awe into the 55m-deep crater while keeping our eyes peeled for the metre-wide Tongan and Samoan fruit bats that spend their days soaring through the hot air currents.

It’s then from one extreme to another as we switch our lofty views over the land for the underground tunnels of the Paia Dwarfs Cave. Found on the northern part of the island, in the village of Paia, this 1km lava tube cave is still said to be home to dwarves, with their footprints supposedly still visible. The legend goes that they’d lived there for all time in secrecy, until one day a local villager chanced across them. He was sworn to secrecy in return for fresh food every day, until the time came when, confused by all the free food, the villager’s wife demanded to know where it was coming from and he spilled the beans. The food parcels stopped immediately, the moral of the story apparently being that some secrets should be kept from your wife!

Samoa being Samoa, however, these underground caverns quickly take on a highly adventurous nature – there’s no safety ropes or helmets here. Scrambling down through the jagged rocks, slipping in our flip flops while desperately trying to keep up with our guide, who is armed with the only torch in the group, we’re soon deep underground.

The tunnels stretch onwards, linked by separate caverns that you have to swim through, and the sense of danger is never far away. The dwarves might not have been far off either, but sadly we had to make do with mere footprints.

Yet while our days are filled with climbing volcanoes, clambering through flooded tunnels or simply soaking up the rays on one of the many beaches, each night it is back to our fales. Indeed, as Anthony, a man born and bred on Savai’i explains, in comparison to the more developed (but still extremely laidback) Upolu, the chilled-out Savai’i is the “better island”, as it’s a place “you can escape the world, where it’s just the small world of your fale”. The standard cheap accommodation found across Samoa, fales are little beachside huts, with palm blinds for windows, meaning the natural air con from the elements tends to keep the mosquitoes out. A night in one, including breakfast and dinner, often costs just S$65. However, if we thought Savai’i was chilled out, we were in for a treat as the next day we jumped aboard a little motorboat for the 20 minute ride over to the tiny isle of Manono for the day. 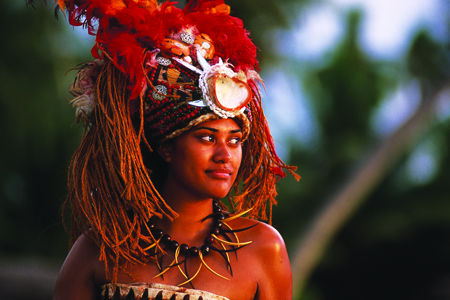 Home to just four villages and 1,000 people, we did a lap of the island in just a couple of hours on foot, stopping now and then for locals to give us a quick demonstration on climbing up coconut trees or basket weaving. It was then into the sublimely refreshing water to snorkel on the forest-like reef that lies just off the shore, before jumping back on board our boat, still dripping, to head back to our fale as the sun melted into the ocean.

Before stepping back on our plane to reality, however, we just had to time for a whistle-stop tour of Upolu as well, taking in the museum dedicated to the Scottish writer Robert Louis Stevenson, who spent his final days in Samoa and became a national hero in the process thanks to his support of the tribal leaders against the then German colonial overlords.

And, after topping up the tans on a number of the heavenly beaches that dot the southern coast, we couldn’t resist a stop at the To Sua Ocean Trench, spectacular photos of which adorn Samoa’s marketing posters the world over. Basically a big hole dropping dramatically through the centre of colourful gardens, the trench is filled with enough sparkling turquoise sea water, accessed by a wooden ladder, to make it just about the most idyllic swimming spot imaginable.

Our Samoan time up, our transformation from arriving, wary and weary travellers could not have been more complete. Safe, secure and cheap, while overflowing with beautiful islands, strong culture and a friendly people, it’s hard to imagine a more welcoming or laidback land than Samoa. It’s a place where even the police knock off at 5pm, where the buses stay put for the night if they’re not filled up and, best of all, where insuring visitors leave happy is an integral part of the culture.