My friends and I call it ‘The Big G’ (The Big Guilt), but you probably know it as ‘Beer Fear’ or ‘Party Heart’. It’s the old familiar friend that gets in touch when you wake up after a hectic night out.

What causes the fear?

Feeling anxious after drinking is normal – and natural. You’ve given your body a massive shot of poison and it’s struggling to get rid of it.

“One of the major reasons for post-drinking anxiety is your plummeting blood sugar levels,” says Jacqui Cleaver of New You Boot Camp. “Alcohol and mixers really make your blood sugars peak. After this peak comes the crash, and this is what leads to the lack of energy, terrible anxiety and the shakes the next day.”

Dr Sohere Roked is a GP who has treated plenty of people for alcohol-related anxiety. “It’s a common reaction, especially as one gets older, as the body is less able to cope with alcohol,” she explains. “When you first drink alcohol, it promotes relaxation and de-stressing. However, the body then has to fight off the sedative effects and is put into a state of hyperactivity to counteract it, which can cause the guilt and terror symptoms.”

Life and work coach Charles Linden has treated more than 160,000 people for anxiety and has noticed that numbers of young people suffering with alcohol-related anxiety disorders are increasing. “A large proportion of the anxious people we treat use alcohol medicinally, even when the alcohol may have been the catalyst for their high anxiety,” he explains. “There is definitely a marked increase in the implication of alcohol in the development of anxiety disorders in young people.”

Unsurprisingly, this kind of anxiety canhave long-lasting consequences. “For themajority of people, this is a short termproblem,” Dr Roked continues. “However, ifyou already suffer with anxiety or paranoia,it can make it worse, and lead to mentalhealth problems.” Yikes.

Ways to limit the damage:

Sounds bad, doesn’t it? However, even if you’re reading this thinking, ‘Goodness, how troubling,’ let’s be honest, you’re probably not going to give up the booze. GP and MD of 3 Monkeys Health + Wellness Dr Martin Godfrey recommends the following if you’re on a mission to obliterate your liver. “The obvious answer is not to drink to the point of losing self-control,” he advises. “Avoiding shots is a good idea, you should also avoid alcohol if you’re on medication, and make sure that you have a good meal before drinking, as this will slow the alcohol’s absorption. Drink water throughout the night, and don’t worry too much the next day – remember, most of your friends probably have the fear, too!”

Now, let’s just pretend that, despite having this stellar advice, you’ve gone out on an empty stomach, you’ve avoided water all night, and you’ve just woken up feeling like death. What next? Let’s start with water. Even if the thought of putting something in your mouth makes you heave, give it a go; try herbal teas if you need a bit of flavour. It’s advisable to try to drink a few pints of water before you go to bed, and although we’ve heard mixed reviews about the Dioralyte trick, it’s always worth a go. Dioralyte is meant to help the body hydrate after diarrhoea, so it should, in effect, keep you from dehydrating overnight. If you can stand the sweetness, Jacqui recommends a teaspoon of cinnamon before you go out, and one when you come home. Cinnamon stabilises blood sugar levels and counteracts sugar, helping to prevent the sugar high and deplete the next-day crash.

“People tend to grab foods such as crisps, chocolate and bread as their body craves a higher blood sugar level,” she warns. “This is exactly what they shouldn’t have. A big juicy steak or eggs and bacon would be the best solution – protein is what really helps.” 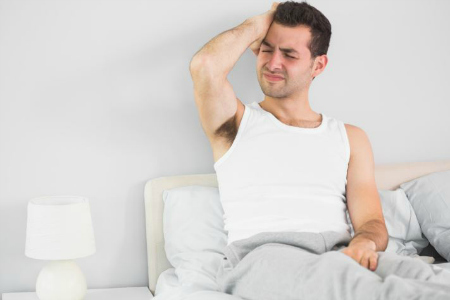 Dr Roked recommends Vitamin C and advises anyone wrestling with their conscience to go back to bed (obviously this might not work during the week – in which case, tough). “Sleeping is a good option, especially if the anxiety is severe,” she says. “It’s also a good idea to make some food in advance to have the morning after, as you don’t want to be preparing food with a terrible hangover.”

Charles stresses that eating properly is the key to recovery. “Diet is vital to good health, and during high anxiety, the body becomes depleted much faster. Maintain a healthy blood-sugar level by cutting down on carbohydrates and sugary foods, and stocking up on protein-rich food,” he advises. “Light exercise, such as a slow walk, will increase systemic blood-flow, stretch out tight muscles and help regulate breathing.”

So, there you have it – TNT’s guide to getting rid of that Sunday morning fear. Weekends will never be the same again. Who’s up for a cheeky pint?

Storms and high winds to batter UK this week