“Or just Cornish.” I’m on a breezy beach, peering out to sea in the half-light provided by an afternoon’s September-grey sky.

Hundreds of incredibly cold looking people are plunging into the churning surf, each of them sans wetsuit, brandishing a plywood board, and with a colourful bathing cap pulled on. I couldn’t help but ask, why?

The official answer is that this is the World Bellyboard Championships. A local tradition since 2002, it’s dedicated to the late Arthur Traveller, a Londoner who regularly visited Chapel Porth beach here in St Agnes, Cornwall, to ride the waves on his belly using a piece of ply.

His style of “surfing” might sound a bit odd, but “bellyboarding” on wood was all the rage in this part of England in the Fifties and Sixties.

Maybe that’s why the world championships gets such a good turnout; in among the younger folks are plenty of old-timers having rollicking good fun reliving their youth.

But there’s some truth to Lisa’s “Cornish” answer, too.

It seems appropriate that this county rests in the part of England that resembles a toe poking into the sea – the Cornish are proud of their surfing heritage, which dates from the early 1900s. 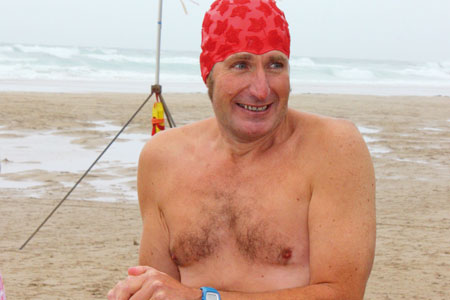 Aside from this, though, is an even deeper sense of distinct identity. During the 2011 UK census, there was a campaign to have a Cornish tick-box in the “nationality” section, and it has long been argued that it should be considered an ethnicity.

It’s true that the Cornish have more in common with Celtic culture than English; there are Cornish kilts, tartans and even a separate language.

The flag of Cornwall – a white cross on black, named Saint Piran’s Flag after a 6th-century Cornish abbott – is everywhere, too, displayed in front windows and fluttering on cars.

There’s definitely a unique up-for-anything attitude among the locals (you wouldn’t catch a glum-faced Londoner running into the cold, stormy waves with a smile on their face).

Lisa’s mate, Alice White, is now prepping to dive in. Dressed in a spotty swimsuit, at 51, she’s about to enter a “Juniors” heat – the “Seniors” are reserved for those over 60.

Why does she think it’s a good idea? “If you can catch a few good ones and avoid hypothermia, it’s great fun,” she replies.

Winning is a bonus, but no one takes that too seriously – after all, “enjoyment” is a category on which competitors are scored.

Inspired by this carefree lust for fun, I decide to brave the chilly water myself and sign up for coasteering in Newquay the next day. On the way, my cabbie seems unimpressed. 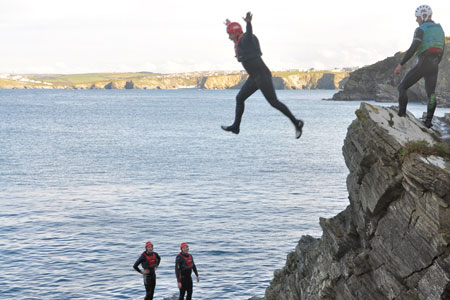 “Ooh, I’m not sure about that,” he disapproves with broad West Country inflection. “It’s dangerous, I hear. Lots of people been injured lately.”

As if to prove it, when I meet instructor Ben at Fistral Beach, we pass a number of notices along the cliffside instructing people not to jump from the rocks to the sea.

Seeing as coasteering involves essentially just that, I wonder whether this could be bad for business?

Ben looks a bit put out. Seems some locals have taken to tombstoning around here – not a good idea, because if you don’t know the coastline intimately, throwing yourself from a great height into water without knowledge of its depth or where rocks are can be lethal. Coasteering, by contrast, is led by an experienced guide.

Ben’s easygoing manner – he’s a Bondi Rescue-type frosted-tip surf dude who says things like “let’s just cruise over here” without a hint of embarrassment – boosts my confidence when it comes to making a variety of faith-testing leaps.

And there is something exhilarating about levelling your stare at the horizon and abandoning yourself to the sea.

But going by my chattering teeth and saltwater-sore throat as I pull off my wetsuit at the end of the lesson, I reckon I’ll leave the full-time batshit craziness to the Cornish.

For more on the championships:
bellyboarding.co.uk

Laura went coasteering with Surfing is Therapy. From £45pp for 2-3hrs
surfingistherapy.com 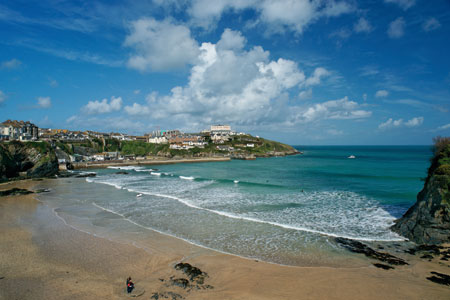 The nightlife in sleepy St Agnes is far from buzzing. But anyone who does fancy a night “on the town” should seek out The Taphouse.

The bar is always rammed and drinkers spill out onto the street. Pints from about £3.

Chy Bar in Newquay is reliable if you want to party.Open until 3am. Cocktails from £4.50.  thekoola.com/the-chy-bar

Stay at The Aramay in St Agnes for a stylish take on B&B. Rooms are thoughtfully decorated and the breakfast is bloody good. Rooms from £105pn.

Train tickets from London Paddington to Bodmin Parkway cost from £31 each way with First Great Western, if booked in advance.
St Agnes is a 30-minute drive from here.  firstgreatwestern.co.uk