The music is industrial and relentless, but the crowd are loving it. Hands in the air, they’re lost in this nocturnal world of shadows and big beats. This is Berghain.

It’s hard to believe that outside, shoppers are mooching around the Ostbahnhof flea market in the Sunday afternoon Berlin sunshine.

It might be the day of rest, but Saturday night’s party is still going on for the Berghain faithful, whose ethos is go hard, go long, or go home.

This city’s techno scene is world-famous, and Berghain is the leader of a pack of hardcore dance clubs serving up epic sessions that start after midnight and often continue until well past 6am the next day.

Tresor, Golden Gate, Watergate and – for those with the stamina to party on through the following afternoon – Club der Visionaere are just a few of the venues in Berlin that, when it comes to serious clubbing, take no prisoners.

About 12 hours earlier, at 1am, I’m queuing outside the imposing grey monolith, anxiously watching as countless others are turned away.

Berghain is as renowned for its sex ‘n’ drugs-related debauchery as its techno scene, and there can’t be a club on Earth with a tougher door policy.

“No photos!” is the command when they suss I’m not local. This rule is absolute: part of the mystique and a way of protecting privacy in an ‘anything goes’ sanctuary.

Relieved to have passed the unspoken entry criteria, I nod obediently, pay my £10 and the giant bouncer thumps a big stamp on my forearm. I’m in. 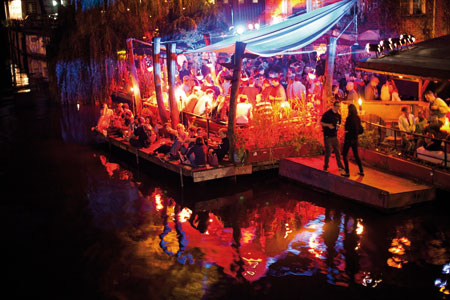 I climb the stairs to the main dancefloor and see two men in the shadows below immediately disappear into a pitch-black ‘playroom’. Things happen fast in here.

The main dancefloor is packed and I feel my whole body vibrating with the insistent, abrasive electronic sound of industrial techno. It’s very, very loud.

The crowd is predominantly gay and already many are shirtless; but all ages and orientations are represented in true rainbow Berlin style.

Corridors lead to dark, smoke-filled rooms with couches where, after daybreak, the coloured light filtering through stained glass will be the only reminder that an outside world still exists.

Heading upstairs past heavy iron girders and old machinery (the building used to be a power station in 1950s Communist-controlled Berlin), I arrive at the top floor – the ‘Panorama bar’ – where everyone is high on house beats and various pharmaceuticals.

Most are here to dance, but in unlit cubby holes, couples are getting intimate. One 26-year-old Berliner, Antonia, is taking a rest under a giant picture of a man showing off his anus.

A regular, she still can’t figure out the unwritten rules for getting into this iconic otherworld.

“I’ve seen 15 people in front of me get turned back at a time. The best thing is to come in ones or twos, but no one can say what the policy is,” she says, shrugging her shoulders.

A shirtless guy with a pierced lip and a ripped torso leans over to tell us that confidence and “not dressing up” is key. Hence his barely getting dressed at all. 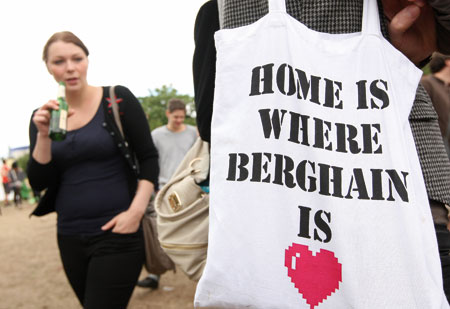 You need to eat when you’re going all weekend, and as Antonia says: “For a proper Berghain weekend, we party for a while, then we go outside for a couple of hours to grab some food and then we come back – and start again!”

Hours later, around 4pm, I bump into her on the dancefloor and she asks, “What day is it now?” But even she knows her limits. “You can’t do Berghain every week. And you need two days to recover. I’m not back at work until Wednesday.”

Winking, she asks if I’ve seen the darkrooms. “What happens?” I ask, feigning ignorance. “Whatever you want,” she says with German directness. “With whoever you want!”

Under red lights, she can’t see me blush. Suddenly the automatic blinds flash open for a split second and we’re frozen in the late afternoon daylight. “When do people go home then?” I ask.

Antonia just laughs, throws her hands up and dances her way back into the fray. In Berlin anything goes; and it goes for as long as you want it to.

Budget: Sneak out from Berghain to refuel at the nearby Ostbahnhof flea market where £2 will buy you Berlin must-try currywurst, washed down with a £1.60 pint of fresh orange juice. (East of the Berlin-Ostbahnhof station, Koppenstraße 3)

Midrange: In the Turkish quarter of Kreuzberg, Falafel & Falafel specialises in, you guessed it, falafel. Filling plates from £3.25. (102 Skalitzer Straße)

Luxury: Outside tables and fairy lights give highly recommended Cuno a relaxed vibe. A tenner will buy you a Vietnamese or sushi feast on the Kreuzberg-Friedrichshain border. berlin-cuno.de 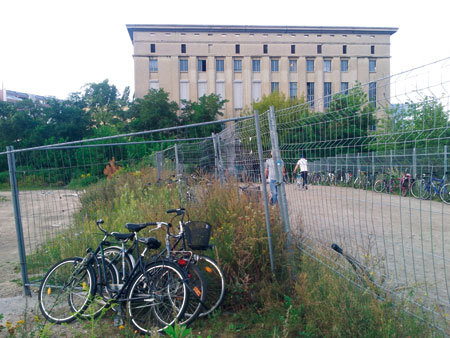 Budget: Go native at Revaler Straße, which on a weekend is packed with twentysomethings hanging out on the street, drinking big £1.20 bottles of beer bought from nearby kiosks. The perfect warm-up to a night on the town.

Midrange: Revaler Straße is also home to good value bar CK-99, which has cocktails starting at £3.60 for early birds. Happy hour is 6-9pm.

Luxury: For a complete change of scene, head to ritzy cult cocktail bar Green Door in Schoeneberg for stylish £6.50 cocktails with the media set.

Budget: The quirky East German-themed Ostel is right next to Berghain. Crawl back to a dorm bed from  £12pn.

Midrange: The Ibis Ostbahnhof is handily located for transport and is just five minutes’ walk from Berghain, with single/ double rooms from £57pn.

Luxury: Berliners are always keen to make an extra buck from short-term rental of their apartments. A swish Friedrichshain flat can be all yours for £65pn or less on Airbnb.

Beers at the Waterfalls in Darwin