Benetton said the photos of political and religious leaders making out, part of the company’s Unhate campaign, were “symbolic images of reconciliation” with a touch of ironic hope and constructive provocation,” to stimulate reflection on how politics, faith and ideas, when they are divergent and mutually opposed, must still lead to dialogue and mediation.” 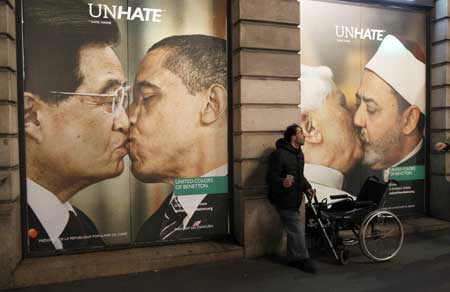 The Vatican threatened legal action and said the image was “offensive not only to the dignity of the pope and the Catholic Church, but also to the sensibilities of believers.”

“It shows a serious lack of respect for the pope,” a Vatican spokesman said.

Benetton withdrew the ad immediately after its Wednesday debut once the Vatican denounced it as an unacceptable provocation.

Benetton had said its “unhate” campaign was aimed at fostering tolerance, but the Vatican’s daily newspaper called it “an insult to believers in the name of profit.”

“The White House has a longstanding policy disapproving of the use of the president’s name and likeness for commercial purposes,” Schultz said.

Schultz declined to say if the White House would contact Benetton directly to express its objections.

The images have also been banned by The Sunday Times, International Herald Tribune and The Guardian.

Snowbombing – How it Started

Australian immigration gets a makeover

Half of the Great Barrier Reef’s coral destroyed in last 30 years, says study