Best of the veg: London’s top vegetarian cafes and restaurants that even meat-eaters will love

The horse meat debacle hasn’t only given rise to a slew of puntastic invention (bolog-neighs, burgers at hoof price, etc), but it’s been revealed that sales of meat alternative Quorn more than doubled in the wake of news that some UK supermarket burgers and ready meals contained an equine element.

So it appears uncertainty over meat supplies has pushed carnivores in a much-resisted direction – the dreaded meat-free meal.

But that doesn’t have to mean fake sausages or tasteless tofu. Why not be inspired to try some of London’s more inventive veggie restaurants?

It needn’t mean a full-time conversion, but it’s a chance to try something new.One of the capital’s quirkier meat-free eateries is The Bonnington Cafe, which started life as a squat cafe in the Eighties. 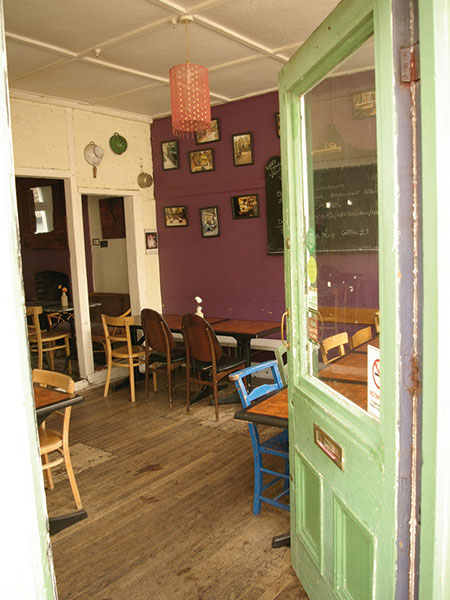 The Bonnington Cafe has a boho bent

No single person runs the restaurant at the Bonnington Square Community Centre in Vauxhall – rather, a collective of cooks take turns in the kitchen each night, bringing their own twist on veggie and vegan food to the ever-changing menu.

Diners must book their table directly with the chef and all courses are kept to the same low prices: just £3 for starters, £7 for mains and £3 for desserts. Kamila Gruszecka, 33, has been with the cafe for eight years.

Originally from Poland, she says she was “very fortunate” to have discovered the project just a few months after she first moved to London.

“I was doing odd jobs like cleaning houses and walking dogs,” she tells us. Then, with no professional cooking background, she started volunteering at the cafe.

“It was the best training I could get,” she says, revealing that now as well as cooking at The Bonnington, she also has her own catering business.

Designing a menu for the cafe is an on-the-hoof (sorry) operation – Gruszecka says she visits food markets on a Monday to see what’s fresh, before cooking up the fruits of her foraging on Tuesday nights.

This keeps the cuisine on offer varied, taking in anything from Asian to Mediterrenean to British influences. 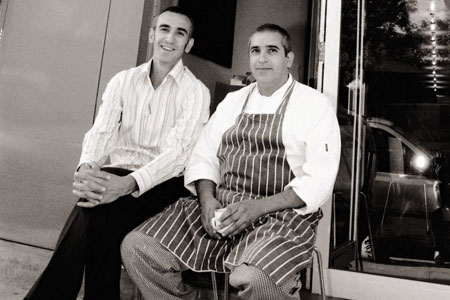 Adrian and Michael Daniel from The Gate

A restaurant with a reputation for converting meat-eaters is The Gate, where brothers Adrian and Michael Daniel have built on their Indo-Iraqi Jewish background with French and Italian influences, serving some of the most exciting food (not just veggie food) in the city since 1989.

And, even better, The Gate regularly teaches cooking classes so you can learn how to make stellar veggie fare at home.“We cover the classic dishes, such as aubergine teriyaki,” Michael says.

“A lot of our customers seem intimidated by how involved the food is, so these classes demystify the recipes.”Classes will restart once The Gate’s Hammersmith branch reopens (see box, below) and cost £60 for 3.5 hours of group tuition.

To simply sample the food now, there’s another branch in Islington.

“When we started, veggie food was all about being healthy, but for us it’s more about pleasure,” Michael says. Sounds like the veggie eatery for us. 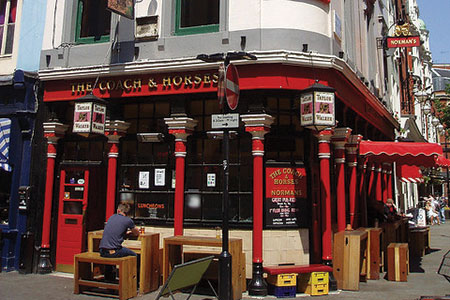 The Coach and Horses – Soho

It seems to go against the very fibre of the British ‘pint of ale and a packet of pork scratchings’ model for the pub, but this Soho boozer is a purely vegetarian affair.

There are veggie versions of burgers and bangers ‘n’ mash, and our personal favourite, the tofush and chips. Two courses for £14.95 or three for £19.95.

If the word ‘vegetarian’ strikes fear into your carnivore-to-the-core heart, surely the only concept more terrifying is ‘vegan’.

But try this trendy little spot in Kensington and you could well find yourself converted by the passionate vegan chef’s imaginative cooking.

Dishes such as seitan (wheat gluten) stroganoff and pumpkin noodles with grated coconut will be quite unlike anything you’ve tried before – in a good way! 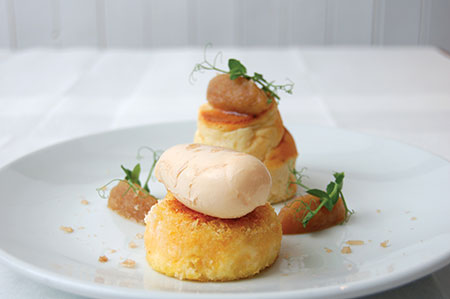 For a fine-dining treat, find out just how good vegetables can taste at Michelin-recommended Vanilla Black.

No boiled-to-buggery green beans here – instead, dishes include the likes of brie ice cream and deep-fried pickled egg with chips and beer gravy.

Ten hot dishes taking inspiration from global cuisine are offered daily (from curries and hotpots to stir fries) and at budget prices (between £4.50 and £6.80). It’s fast, unfussy and reliable.

A daily changing and uber-cheap menu that eschews health fads for carb-heavy grub has kept this eatery in business for almost 40 years. There’s a southeast Asian edge, too. 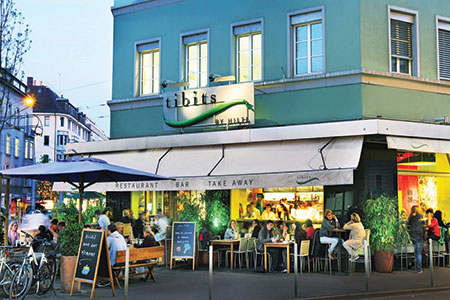 A sort of veggie fast-food chain but a bit classier, this Swiss import offers up a buffet bar and pay-by-weight policy – load up your plate and get charged per 100 grams.

Find veggie dishes with a kick at this Keralan restaurant, specialising in the south Indian state’s cuisine.

So good that plenty of non-veggies drop by to try its varied menu – from Caribbean platters to fennel sausages with parsnip and carrot mash –  Manna will win you over. 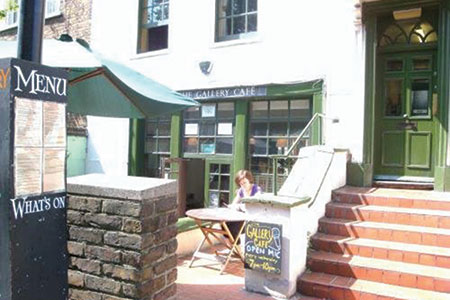 Consider this eco-eating: as well as a vegan and veggie menu, the cafe offers Fairtrade tea and coffee, uses biodegradable packaging, and is run by volunteers.

It offers everything from a full veggie breakfast (we like the sound of the tofu scramble) to make-your-own pizzas. There are also regular art exhibits and gigs.

This east London spot could not be more earnestly worthy, seeing as it describes itself as a “non-hierarchical, 100 per cent vegan space run completely by volunteers”. But enough of all that ‘communidee’ idealism – what of the food?

It’s fresh and delicious, and more than enough to encourage you to leave your cynicism at the door. Try one of the burgers (made from organic tofu and pumpkin seeds) or the gunky nacho bowl.

This gourmet veggie outfit takes pride in its innovative food, turning a bored-to-death nose up at the likes of veggie lasagne in favour of creations including mushroom wellington (portobello mushrooms, walnut pâté and sauteed red onions encased in puff pastry) and aubergine schnitzel (filled with mozzarella cheese, tomatoes, parmesan and basil pesto, rolled in breadcrumbs). Drool. 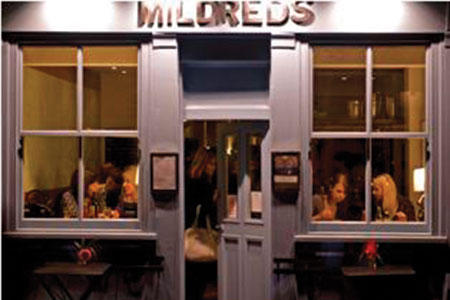 Widely considered London’s coolest veggie eatery, and a bona fide foodie institution, you’ll no doubt have to queue for a table at Mildreds (you can’t book).

The crowds pack in for simple but sublime meat-free fare – smoked tofu with apple and bean sausages and Sri Lankan sweet potato and cashew nut curry are mouthwatering examples.

The Lounge offers an impressively inclusive menu – there’s wheat-free, gluten-free and cholesterol-free dishes along with vegan and more.

The north Indian veggie dishes here are worth the trek into the wilds of north London.

A riverside terrace and laidback vibe make this one of the more idyllic places to feel good about not munching on meat. There’s everything from Caribbean and Japanese to Indian influences on the menu, too, so you won’t be stuck for ideas. 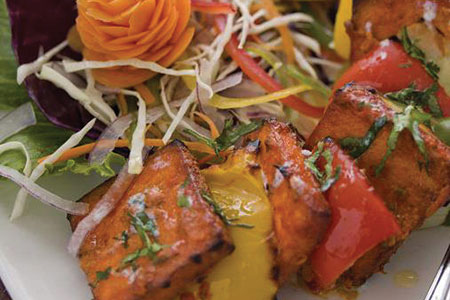 Woodlands’ take on south Indian veggie cuisine – no butter, no cream – has stood it in good stead since the Eighties, and there are now three branches open in London (the others are in swish-as Marylebone and Hampstead).

Their spicy blends include dosas, lentil pizzas and cost-effective thalis (where you get a range of curries for £18.50, allowing you to sample a selection of flavours). The menu is overwhelmingly long, so prepare to “umm” and “aah”. A lot.

This being Camden, Green Note’s veggie cafe-bar doubles as a live music venue, with a focus on folk, blues and roots.

Food-wise, there’s veggie tapas, while drink-wise, there’s a bunch of guest beers (and if the bar doesn’t stock your fave, you’re invited to request it and they’ll cosnider ordering it in). Vibe is decidedly boho.

Claiming to be the first vegetarian-organic-Italian restaurant in London, you can eat without meat from antipasti to pasta and through to secondi here. Mm, bellissimo!

Sport opinion: Michael Clarke and Aussies are DRS dunces – it will decide Ashes