With 3,000 miles of coastline, South Africa suffers no shortage of incredible beaches. Whether you’re hoping to witness a 40-ton humpback whale breaching, surf world-class waves or simply work on that tan, there is a beach in South Africa to suit every purpose.

South Africans will be at pains to remind you that these are some of the best shores in the world, and there’s strong evidence to back this claim: some of the biggest pro-surfing competitions are held here, Hermanus is the best land-based whale watching site in the world, and great white shark breaching tours are unique to the Western Cape.

Cape Town is South Africa’s most popular city, and rightfully so. Located on the southwest coast, the city serves as a perfect base for surfing, cage diving with great white sharks, visiting the tiny, brilliantly named Jackass penguins, and simply admiring the views of iconic Table Mountain while soaking up the sunshine. 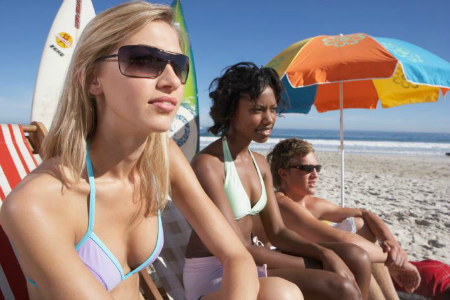 Further east along the coast is where the Indian Ocean meets the Atlantic. This area is arguably the best place in the world for spotting whales, often without ever having to leave the shore (a big relief for anyone prone to seasickness). The Whale Coast, as it’s often termed, is also where you can spot the Marine Big Five – the ocean’s answer to the famous safari Big Five – consisting of sharks, seals, penguins, dolphins and, of course, whales. Hermanus is the most popular launch-pad for sea-based adventures.

The scenic Garden Route stretches around the Western Cape coast and is home to Plettenberg Bay, one of the most popular staycation spots for South Africans. It’s a great place for swimming, long walks along the clean beaches, sailing and kayaking. Just east of Plettenberg, crossing into the Eastern Cape province, is the site of the annual Billabong Pro ASP World Tour, which puts this area high on the list for surfers keen to tackle the waves in this world-class surfing spot.

Follow the Eastern Cape coast and you’ll reach the KwaZulu-Natal coast in between Durban and the Mozambique border. This is an amazing environment for divers: Sodwana Bay is commonly cited as one of the world’s top 10 dive sites. If you’re visiting between November and January, you can also watch the loggerhead and leatherback turtles laying their eggs on these north-eastern beaches. Whether you’re travelling to South Africa for the sunshine, the wildlife, or the surf, we’ve got your ideal beach right here…

Fancy booking your own trip to South Africa? Try this 21-day tour from Victoria Falls to Cape Town

Named as the second-greatest surfing destination in the world, Jeffrey’s Bay (‘J-Bay’ if you want to sound like a local) is the surfing Mecca of South Africa. Every July, the Billabong Pro ASP World Tour is held in this bay on Supertubes Beach, which is famed for its right-hand point break. The waves in Jeffrey’s Bay can reach between 10 and 12 feet, they’re very fast, and the swell is best in the winter months (from May to July). It’s going to be chilly at that time of year, but it’s worth it, especially because the surf isn’t as crowded as other world-class breaks, and you’ll have a lot more space than if you were to visit in the summer. Learn how to conquer the waves with Surf-Jbay, who offer lessons for everyone from beginners to advanced surfers. They can also arrange your transfers and they’ll make sure you’re out of the water before sunset, around which time it’s the domain of South Africa’s famous white sharks.

Get to J-Bay by flying into Port Elizabeth (one hour, 40 minutes from Johannesburg) and then driving down the N2 highway for about an hour (48 miles).

Where to stay: Cristal Cove Backpackers is right on the beach and close to the main strip. It’s clean, chilled and modern, with plenty of tours offered, too.

Where to eat: Aside from the surf, J-Bay is widely known for its calamari, which you can sample at friendly Hey Jude, on the beachfront Drommedaris Street.

Where to party: J-Bay is a laid back surfer town, so don’t expect the nightlife to be particularly crazy. Bag a window seat and enjoy a few leisurely evening drinks at the Moroccan Lounge bar, on the corner of Da Gamma and Good Hope Street. 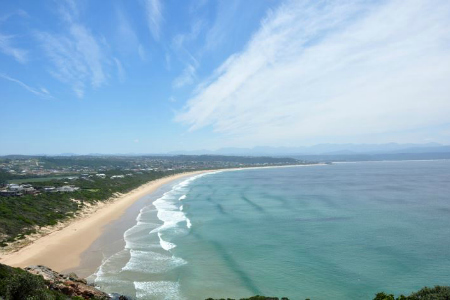 Swanky Clifton Beach is just 10 minutes outside Cape Town and it’s a favourite haunt of city-based sun-seekers during the summer (October to February). This is the slightly quieter version of Camps Bay, perhaps Cape Town’s most popular beach, which is located just around the corner.

These pristine white sandy coves have views of the 12 Apostles and are protected from the wind, so it’s a great spot for settling down to top up your tan, while admiring some of Cape Town’s most beautiful residents parading around the beach in their smalls.

There are four coves at Clifton: Fourth Beach has more of a family vibe, so if you’re single and looking to mingle, stick to the first three and in particular, Second Beach, which has a younger crowd. If you’re planning to swim, bear in mind that the water here is the ice-cold Atlantic variety, so don’t expect a warm welcome. However, for landlubbers – or those with a thick skin – Clifton is ideal, and as there are vendors with a constant supply of cold water and ice lollies, you can quite happily spend the entire day prostrate.

However long you spend here, don’t leave before sunset, as Clifton witnesses some dazzling sinking suns. Sadly, booze is prohibited on the beach, which is something to consider if you’re bringing an evening picnic, as many of the locals do.

To get to Clifton, take the Hout Bay bus, which runs from the Civic Centre via Sea Point. It’s not a great idea to drive during the summer, as finding a place to park will be next to impossible.

Where to stay: From Atlantic Point Backpackers, by the V&A Waterfront, it’s just a 25-minute journey by public transport to Clifton Beach. This hostel is newly built, has friendly staff, and a great location; it’s also good for socialising.

Where to eat: Take a break from the beach with lunch or dinner at Marika’s, a little Greek restaurant in Camps Bay, on Upper Buitenkant Street. This rooftop joint has views of Table Mountain and is a refreshing alternative to the super-sleek restaurants and bars that are so prevalent in this affluent area.

Where to party: When the sun has gone down, brush off the sand and head to The Assembly, in District Six. This cool club is based in an old warehouse and is one of the best places to catch live music in Cape Town, serving up all kinds of alternative beats from local and international DJs.

Book your 35-day trip from Lilongwe to Cape Town here

Want to keep reading? Download our eMag, or pick up a copy of TNT on your travels around London!

Jeremy Deller – Joy in People at the Hayward Gallery