48 hours in Salford: Go beyond the Beeb

Ever since the closure of the dockyards back in the 1980s, the area has shaken off its industrial background and emerged as a tourist destination in its own right, with glossy TV studios, art venues and a deluge of quirky bars.

Start your weekend off by getting your bearings with a ride through the historic waterways of Salford. Manchester Cruises run 45-minute excursions out from the North Bay and along the Manchester Ship canal, drifting under the Lowry and Trafford Bridges and past the recently relocated Coronation Street set. Afterwards, drop into Craftbrew for a nibble on some tapas or artisan deliboards, guzzled down with a leaf tea or illy coffee. Stride back into the swanky piazza of MediaCityUK for a 90-minute tour of the BBC studios’ Mancunian outpost. Prime-time favourites including Match of the Day, BBC Breakfast and Mastermind are all filmed in the glossy building, with the tour taking guests behind the scenes of all the TV and radio studios.

Before heading off to explore, drop off your luggage at the hotel. We recommend the Old Trafford Lodge, a hotel set within the historic cricket ground, with many of the rooms boasting their own private balcony overlooking the green.

Close to the arrival point of the boat is The Lowry arts venue, which is home to both an art gallery and theatre. Paintings by 20th-centuryMancunian artist L.S. Lowry form a permanent free exhibition at the centre, with his famous artwork depicting matchstick figures against industrial backdrops. Throughout the year, other film and photographic exhibitions are also dotted around the venue to liven things up a bit. On your way out, grab a coffee from the Tower Coffee Shop by the main doors of the Lowry, and take a stroll on to the Old Trafford stadium via Sir Matt Busby Way, named after one of the club’s most iconic managers. Yes, it’s a cliché, but why pass up the opportunity to snuggle into the home dressing room and tunnel, and get a feel for what it’s like in the manager’s seat in the dugout? While you may not see some of the club’s top players, the stadium is adorned with statues of key figures from yesteryear, including Sir Alex Ferguson and George Best. All kinds of football paraphernalia, such as kits and novelty figure heads, is also available in the club’s Megastore – all 17,000 square feet of it.

For your first night, it’s time to try out some of the bars in the city. But, before then, line your stomach with a fine-dine meal at Damson Restaurant, which offers a high-end three-course set menu, plus an extensive collection of wines calling out to diners from a gigantic glass cabinet. After tipping back a cocktail or two, move on to the rustic-looking DOCKyard, popular with media types from the BBC studios next door. The interior is in keeping with the industrial heritage of the region, with ingenious metal swing seats and a bar made out of reclaimed driftwood from the old dockyards. A jukebox and pinball game sits in the corner, while bartenders serve up the company’s own range of ales, as well as wines and Flying Dog beer. Afterwards, head straight for Lime bar, which stocks an audacious list of champagne, vodka and rum-based cocktails to get you pumping.

After a night of drinking and Northern shenanigans, take some time to recover with a heavy dose of caffeine before heading out to the Imperial War Museum North. The aluminium building, designed across three shards to look like a globe torn apart by the effects of war, sits on the bank of the Manchester Ship Canal. Various exhibitions aim to focus on the experience of war since 1914, with a 360° Big Picture Show livening up the main space throughout the day. Those with a head for heights can also climb the jagged splinter of the Air Shard, which offers unrivalled views across the Quays and, on a clear day, out to the industrial skyline of Manchester.

If you’re feeling a bit peckish after your cultural morning, slink into the WaterShard café inside the museum for a quick bite to eat. 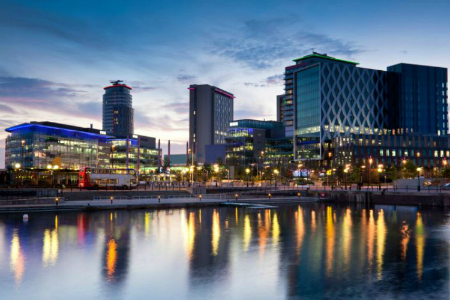 Back by the futuristic Lowry Footbridge is the Lowry Outlet Mall, which has more than 80 stores brimming with bargains. Here you’ll find high street names including Gap, Krisp and Pussycat London, each with up to 70% off. If the weather’s playing ball, take on a self-guided walking tour of iconic sculptures around the area to get a taste of the rich industrial heritage. Statues of interest include the ‘Factory Girls’ sculpture by David Appleyard, which represents women workers of Metropolitan Vickers, and another one titled ‘Where the Wild Things Were’, which highlights the connections between Manchester Ship Canal and the rest of the world.

For your last evening, go out in style with a show at the Lowry Theatre. The venue pulls in top names and glitzy productions year round from the worlds of comedy, drama and dance. Enjoy a hearty and tasty pre-show dinner at the Lowry restaurant. Afterwards, all that’s left for you to do is to head back to your hotel to pack, ready for the onward journey.

Salford Quays may only be one square mile, but this means you can saunter home safe in the knowledge you’ve explored every foot and inch of Manchester’s waterfront destination in just 48 hours.