After five minutes of ricocheting over rocks, splashing through streams and resisting the urge to close my eyes as I leap over moss-covered ledges, the forest spits me out into a clearing and I skid to a halt.

I’m in North Wales, getting my first taste of singletracks. These are narrow off-road trails that are roughly the width of a mountain bike.

They divert from the wider main forest paths – also known as fire roads – and are graded in a similar way to ski runs, from easy-peasy greens to expert blacks.

Snowdonia is chock-full of these routes and, staying in the heart of the National Park in Betws-y-Coed, circled by lush river valleys and forests, I’m definitely at the epicentre of the UK’s most exciting biking terrain.

But that’s not to say I’m entirely ready for it. 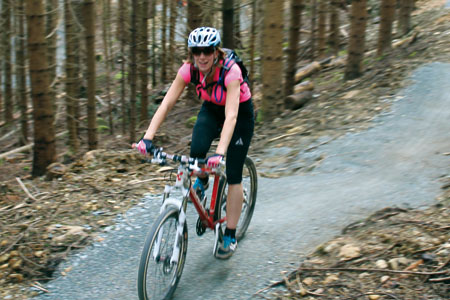 “Have you done much biking before?” Andy, at the bike hire centre, asks me that morning as he fits me out with my wheels. When I mumble an admission to only having ridden on a few gentle tracks before, he smirks.

“Welcome to Wales,” he says. I suddenly get the feeling that I might be biting off more than I can chew.

Although guided rides are offered at the hire centre, my three friends and I are determined to go it alone.

We recklessly head straight for the Marin Trail, a 25km stretch of singletrack with such punishing ascents, tight turns, and hairy downhill slopes that it’s one of the main reasons Betws-y-Coed has a reputation for being the adventure capital of North Wales.

We cycle past hiking shops and busy cafes before crossing a cobbled bridge and starting the 2km ascent into the Gwydir Forest. This is where we pick up the trail, the scent of pine needles filling our nostrils as we peddle. 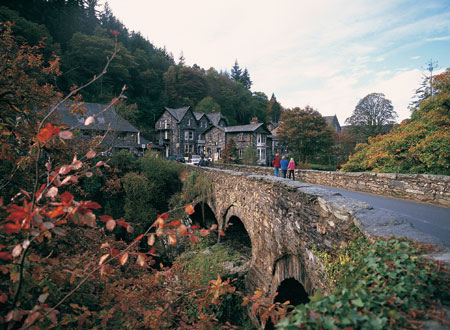 Minutes after turning onto the Marin Trail, I take my first fall, scuffing my knees on the rocks. But luckily the only serious injury is to my ego.

I feel a little shaky when I get back in the saddle, but after half an hour of slipping and stalling, I start to get the hang of it, controlling my speed by ‘feathering’ (lightly touching) my brakes and switching gears in plenty of time before taking on the mazes of tree roots that criss-cross my path.

My efforts are rewarded with scenery so dramatic it’s hard to believe I’m in Britain: isolated lakes reflecting perfect mirror images of surrounding hills stun me into silence.

Eventually my friends and I take a break, snacking on ‘bara brith’ (Welsh fruit cake) to fuel up for the way home. As we watch the autumn sun start to dip, Snowdonia’s mountains form a jagged silhouette against the burnt-orange sky. 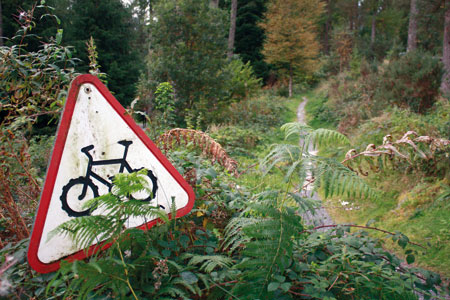 After a total of four hours’ riding, we shoot out of the woods onto a fire road and land back in Betws-y-Coed.

We rejoin civilisation at the Stable Bar, or Y Stable as it’s known in Welsh, which is a central hub for mountain bikers to treat themselves to a well-earned pint after a day on the trails.

Later that evening, we spend a good hour in the hotel hot tub, attempting to soothe the muscles in our aching legs and backsides.

But when morning arrives, we still find ourselves with very tender sit bones, so choose to take a less demanding route: a 10km ride along a Roman road to Llyn Elsi reservoir, followed by a gentle walk to Swallow Falls – a spectacular three-tier waterfall, just outside the village. 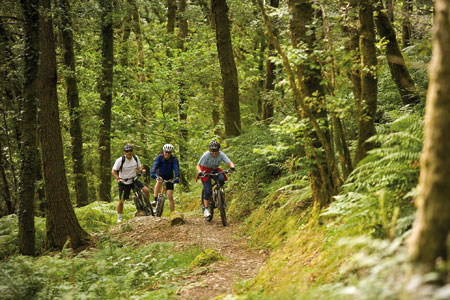 Packing up the car to go home that evening, I gaze up at the forested hillsides and wonder how many mountain bikers are careering along the roads beneath those trees, ripping over roots on the Marin Trail, and freewheeling down the fire roads.

One weekend in Snowdonia has changed my perception of biking altogether and, as the mountains of North Wales give way to the motorways, I definitely see an addictive new hobby taking shape on the horizon.