TNT is proud to be official media partner for the festival. Last year’s BBK in the Spanish sunshine saw record attendance numbers and sets from Radiohead and The Cure. This year punk rockers Green Day, notorious for their raucous spectacular and lengthy sets with crowd participation will headline.

The most successful band in electronic music history, Depeche Mode, will return for their second appearance at Bilbao BBK.

Deloretos, Delorean, We Are Standard and L.A. will also play the weekend, which takes place over 3 days from July 11-13. 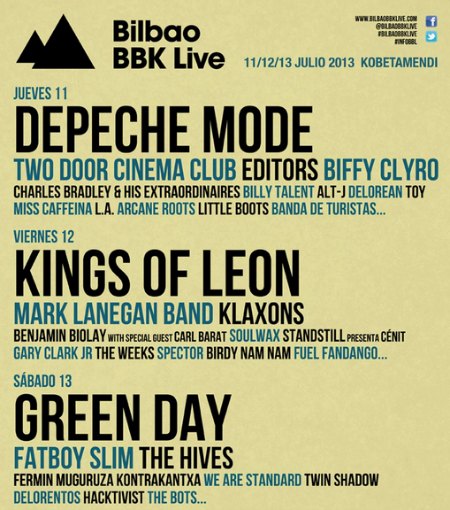 Depeche Mode are set to thrill audiences at Bilabo BBK 2013

Three Day Early Bird tickets to Bilbao BBK Live, including camping, are now on sale until the 22nd of January, for just £77 on See Tickets and Ticketweb. Budget airlines Easyjet and Vueling both serve Bilbao airport from London.

Bilbao BBK Live is a three-day event that takes place on top of a hill surrounded by mountains offering spectacular views over the city of Bilbao. The privileged location of the site, its proximity to the city and beach and a late start of bands, allow festivalgoers to make the most of this event and unique setting. Bilbao is a modern city famous for its architecture, museums and gastronomy, and it’s just a stone’s throw away from some of the best waves in Europe.

Bilbao BBK Live is above all a fuss free festival; with an uncomplicated layout, easy access from the city and airport it has proven to be a huge success with national and international festival goers.

Brits happy for airlines to weigh passengers at check-in