Two men and a teenager have been charged with the murder of three men killed during the Birmingham riots. The city has united to remember their deaths and call for peace.

Yesterday, the first two men Joshua Donald, 26, and a 17-year-old, who cannot be named, appeared in court charged with running over Haroon Jahan, 21, and brothers Shazad Ali, 30, and Abdul Musavir, 31, who stood outside guarding their property during the riots in Birmingham. 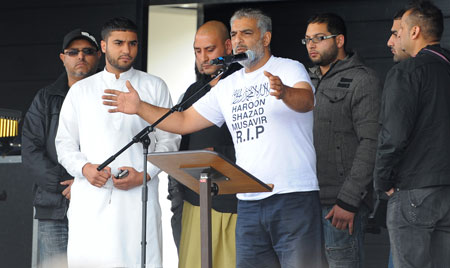 Tarmiq Jahan, father of Haroon Jahan, addresses the peace rally in Summerfield Park, Birmingham, not far from where his 21-year-old son Haroon was killed during the riots.

The three have been charged with the murder of Jahan, and brothers Ali and Musavir.

Tariq Jahan appeals for peace after son murdered in riots

The victims suffered fatal injuries when they were mown down by a car last Wednesday as they tried to protect shops in Winson Green, Birmingham, from looters.

On Sunday, 2,000 people gathered in Birmingham’s Summerfield Park to remember the three men killed in the riots and call for peace.

The men were hailed as martyrs for dying as they stood up to the looters who ransacked Birmingham during the riots. 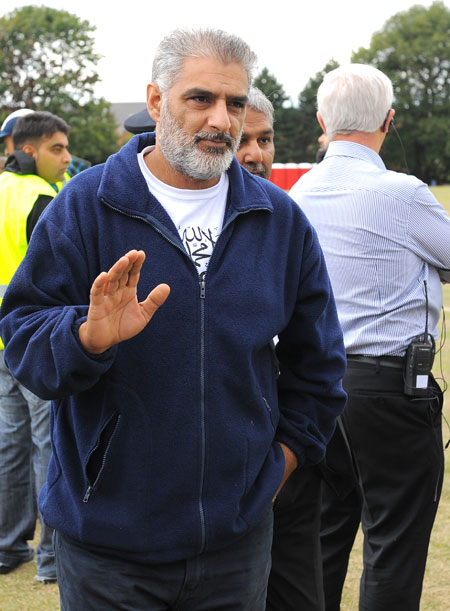 Tarmiq Jahan has been applauded for his calm and dignity after the death of his son and friends in the Birmingham riots.

Tariq Jahan, Haroon’s father, who has already won praise for calming racial tensions after the deaths, spoke to the crowd, thanking them for their support.

“I’m not a speech-maker and I don’t really know what to say, but to see the community together gives me strength in my heart,” Jahan said.

“All I can ask is for people to forget about me and remember these three men who sacrificed their lives for the community.

“These three men died for the community, they didn’t die in vain and I hope this community remembers them forever.”

Chief Constable Chris Sims of West Midlands Police promised that those responsible for the riots in Birmingham would be tracked down and punished.

“I’m absolutely confident that my officers have shown great bravery,” he said.

“They continue to show huge resolve throughout the week.

“We will bring to justice people that have broken the law and we will use some compassion for those that deserve compassion as well.”

Muslim, Sikh, Jewish and Hindu leaders recited prayers for the three dead men, calling for the city to stand united.

Meanwhile, Shazad’s pregnant widow spoken of her grief, saying: “I am devastated. He was my soulmate. He wanted to be a father so much.”

His mother added: “I felt the sky had fallen in. My sons were wonderful men.” 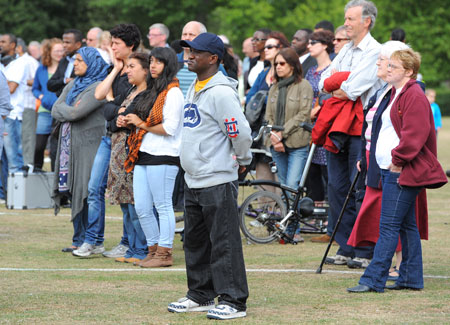 People from across Birmingham gathereded, calling for peace.

The funerals of Jahan, and brothers Ali and Musavir will take place this Thursday in Summerfield Park, Birmingham.

The three men will be buried alongside each other. A relations said: “Because they died together, we thought it was fitting they should be buried together.”

The public has been invited to pay their respects at the event at 3pm, before a private burial at Handsworth Cemetery for family and friends.